“It’s not unusual to find dead bodies in Bujumbura these days. We discover them on the streets, in drainage channels, bushes and rivers,” wrote a Burundian journalist working for IRIN on October 5.

Nobody has contested this fact, which was confirmed a few days later by three organizations, including the International Federation of Human Rights (FIDH). “Arbitrariness, violence and impunity are commonplace in Burundi. The population lives under the yoke of fear exacerbated by summary and extra-judicial executions, massive arbitrary arrests and detentions, allegations of acts of torture, threats and intimidation, mainly by the ruling authorities. The situation could flare up if the international community does not take any far-reaching, coordinated actions,” said FIDH, the Burundian Human Rights League ITEKA and League for Human Rights in the Great Lakes Region LGDL.

Like many of Burundi’s international partners, the three organizations deplored in their joint statement the breakdown of dialogue between the ruling CNDD-FDD party of President Pierre Nkurunziza and the main opposition parties. The African Union, European Union, United States and the United Nations have all expressed the view that only inclusive dialogue can help bring this small country of 10 million people out of the crisis into which it has been sinking for several months.

President Nkurunziza, who was re-elected in July for a controversial third-term mandate, issued on September 23 a decree setting up a “National Commission for Inter-Burundian Dialogue”.

But the new decree raised questions as soon as it was published. Who will take part? Who will mediate in a context where lack of trust between the main players is at its height? Where will such a dialogue take place, given that the main opponents of the regime have recently fled the country, saying they fear for their security? And finally, what will be on the agenda?

No dialogue with opponents of the third mandate

The government’s position is well known: no question of a foreign mediator, nor of dialogue with opponents of Nkurunziza’s third mandate, whom the regime sees as troublemakers and suspected supporters of putschists who staged a failed coup d'Etat on May13 this year. “For those people, there’s no solution but to catch them and try them,” reiterates Nkurunziza’s spokesman Willy Nyamitwe. The government has issued international arrest warrants for some opposition leaders.

Thus the National Council for the Respect of the Arusha Accord and Restoration of the Rule of Law (CNARED), set up in Addis Ababa, Ethiopia, at the end of July by members of the Burundian political opposition and civil society, is de facto excluded from the dialogue.

“It’s dialogue according to Saint Pierre of the CNDD-FDD,” joked one Burundian lawyer.

By excluding its real adversaries, the regime intends to avoid debate on the “thorny issues”. So no going back on Nkurunziza’s third term, which was nevertheless at the root of the current crisis. According to Willy Nyamitwe, the Burundian people, “who are sovereign”, have already expressed themselves on the issue.

Gervais Rufyikiri, the former second Vice-President of Burundi who fled abroad after opposing a third term for his boss, thinks the talks being prepared by the government will not be real dialogue. “Normally, real dialogue takes place between people who have opposing views on an issue,” he said on VOA the day after the presidential decree was issued. “But the dialogue initiated by President Nkurunziza looks like one that will bring together his supporters.”

“Dialogue or monologue?” asked well known Burundian journalist and activist Antoine Kaburahe on the website www.iwacu-burundi.org. He thinks the ruling party “should not forget that the mediators in the Arusha negotiations initially made the mistake of excluding an armed group”. “The country paid dearly for this non-inclusive strategy,” wrote Kaburahe, stressing that the current government “appears to have forgotten this, and that the same causes produce the same effects”.

The Arusha agreement, signed in Tanzania in 2000 after long negotiations, paved the way for an end to the war between the Burundian army, then predominantly Tutsi, and Hutu rebel groups. It is considered the foundation stone for the new Burundi.

Gabriel Rufyiri, President of anti-corruption watchdog OLUCOME, also stresses that a policy of burying one’s head in the sand has never worked in Burundi. He cites the example of a dialogue on national unity organized in 1990 by the government of then-president Pierre Buyoya. “The real problems were not discussed,” says Rufyiri. “It was not until the Arusha negotiations and the ceasefire that the real parties to the conflict engaged real dialogue to find real solutions to the problems at the time.”

However, the government claims it does not need to be lectured by either Kaburahe or Rufyiri.

So how does it respond to the powerful but prudent Catholic Church, which issued a message the week before the presidential decree was published calling for inclusive dialogue. In the message, read out in parish churches across the country, the Catholic bishops of Burundi called on their compatriots to “sit down together, without excluding anyone, so as to diagnose together the illness that is afflicting our country and find the appropriate remedy”. “If necessary, we should not be afraid to call on the mediators who help us,” said the bishops, whose faithful represent at least 60% of the Burundian population. 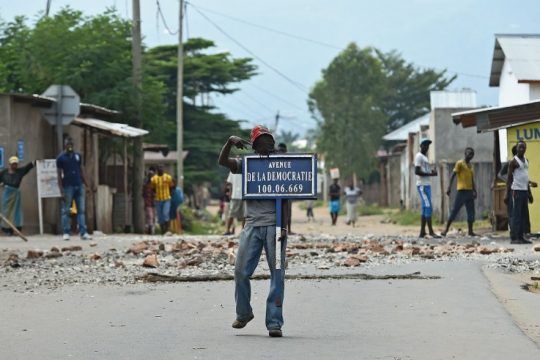 Burundi and the Risk of Civil War 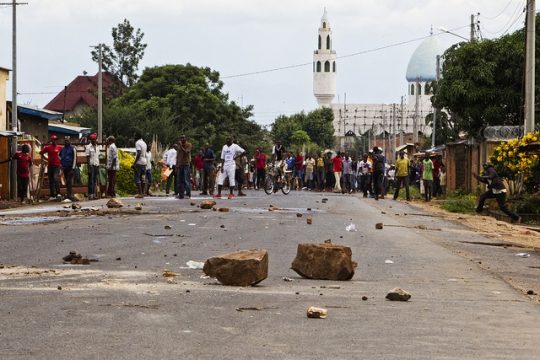