Rwanda submitted this withdrawal on February 29. The African Union told the court on March 3, the day before judges were to hear a case brought against the Rwandan government by Victoire Ingabire, president of the opposition FDU-Inkingi party.

Ingabire is serving a 15-year sentence in a Rwandan prison. In 2012, a court in the Rwandan capital, Kigali, found her guilty of conspiracy against the government and of genocide denial, and sentenced her to eight years. Several charges were politically motivated, linked to her criticisms of the government before the 2010 presidential elections, and her trial was flawed. In 2013, the Supreme Court increased her sentence to 15 years.

The Rwandan minister of justice has denied any link between its withdrawal on individual petitions and Ingabire’s case. In a statement, his ministry said: “Rwanda has decided to withdraw, for review, the declaration” because it “was being exploited” and convicted genocide fugitives were using the court as “a platform for re-invention and sanitization in the guise of defending the rights of the Rwandan People.”

While the court is yet to decide on the validity of the withdrawal notice and rule on any impact it may have on pending cases, Rwanda’s decision is a profound setback to access to justice. The Rwandan government should use the court to contest individual cases, and assert the rights of its citizens to access the court. Instead, it is denying the opportunity for both.

The court was established in 1998 to interpret and apply the African Charter on Human and Peoples’ Rights. Thirty-three states have ratified the protocol establishing the court. The mechanism allowing people to submit direct petitions to the court is a core pillar to strengthen the regional human rights body.

By reversing its position on this crucial aspect, the Rwandan government is depriving its citizens of a valuable avenue of recourse where they feel the national justice system has failed. People in Latin America and Europe are free to approach their regional human rights courts. Despite substantial reforms over 20 years, the Rwandan justice system does not yet consistently act independently, especially in political cases.

Next week the UN Human Rights Committee in Geneva will review Rwanda’s human rights compliance on civil and political rights, including access to justice. If the government is really committed to an African system of human rights protection, it should reverse its decision now.

5 min 9
Kabuga’s transfer to the Mechanism: Is it the right thing to do? 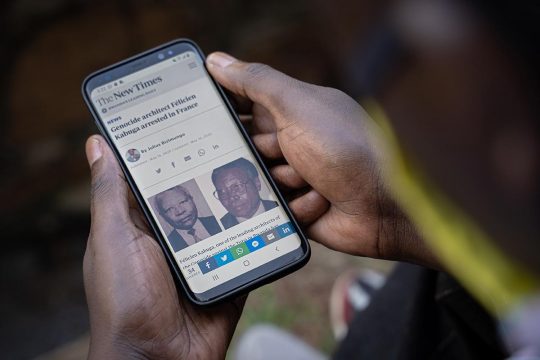 10 min 25
Rwanda: what’s at stake in the Kabuga trial
Most read