A Serb academic turned far-right leader, Vojislav Seselj won notoriety during the 1990s Balkan wars for his incendiary rhetoric and remained defiant over more than a decade in detention at The Hague.

The stocky and ruddy-faced 61-year-old, who once served as deputy prime minister, was declared "not guilty" on Thursday in a shock ruling from the International Criminal Tribunal for the former Yugoslavia (ICTY).

The Serbian Radical Party leader, who plans to stand in a general election next month, has nevertheless stuck to what the judges agreed was "an ardent political ambition to create a Greater Serbia".

"The point of the Serbian Radical Party's existence is the idea of a Greater Serbia. If that idea disappeared, what would we do on the political scene?" he said after returning to Belgrade in 2014 for cancer treatment.

Prosecutors had accused Seselj of poisoning the minds of volunteer forces who committed "unspeakable" atrocities in the 1990s, alleging he "gave the world the term ethnic cleansing" in a quest to forge a "Greater Serbia" as Yugoslavia fell apart.

But judges found there was not sufficient evidence to prove he was guilty on nine counts of war crimes and crimes against humanity, including the murder, torture and deportation of non-Serbs in large areas of Bosnia, Croatia and Serbia.

"I do not feel guilty of anything," he declared triumphantly at a press conference in Belgrade after the ruling.

Since his return, ill health has not prevented Seselj from appearing on reality television, publicly burning EU and NATO flags and firing up far-right rallies ahead of April's election.

Born in Sarajevo in Bosnia in 1954, Seselj studied law and obtained a doctorate, going on to lecture in political science at Sarajevo University in the early 1980s.

The nationalist ideas he developed were not appreciated by the communist regime, and he was convicted of "counter-revolutionary activities" and spent two years in jail.

He then moved to Belgrade where, after communism collapsed, he formed the Serbian Radical Party in 1991, quickly becoming an MP who was known for his shocking antics in parliament -- from swearing to drawing pistols.

Among his ill-famed comments as the conflicts in Croatia and Bosnia broke out, Seselj once boasted on a television talk show that Serbs would "slaughter Croats with rusty spoons".

From 1998 to 2000 he was Serbia's deputy prime minister under the autocratic regime of Slobodan Milosevic, who died during his own war crimes trial at The Hague in 2006.

After giving himself up to the court in 2003, Seselj forced the cancellation of his first trial three years later by going on a hunger strike to insist on the right to defend himself.

A second trial opened in 2007 in which he cast himself as a martyr, thundering his regret that the tribunal did not allow for the death sentence.

"So that proudly, with dignity, upright like my friend Saddam Hussein, I could put the final seal on my ideology," he said, also casting himself as a victim of an anti-Serb conspiracy.

Among his angry outbursts, he once said he smelled the odour of gas when a German judge arrived in the courtroom, and also compared the proceedings to a "satanic ritual".

Vucic is now prime minister and Nikolic is president, while Seselj's anti-Western and pro-Russian rhetoric holds less sway, despite his attention-grabbing tactics.

The Radicals are expected to scrape past the threshold in April's elections with around six percent of votes, which would give Seselj a parliamentary seat.

Political analyst and columnist Cvijetin Milivojevic said that since returning from The Hague, Seselj had toned down his criticism of his now-powerful former ally Vucic as he bids for electoral success.

"Seselj is a serious, calculating politician who has rarely improvised things. In that sense, he has not changed," Milivojevic said. 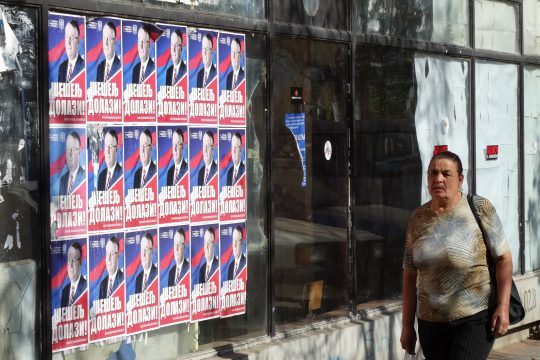