Indonesia’s President Joko “Jokowi” Widodo wants to know where the bodies are buried.

On April 25, Jokowi instructed his security minister, Luhut Binsar Pandjaitan, to start documenting the location of mass graves of the estimated more than 500,000 victims of the 1965-66 “anti-communist” massacres.

Jokowi’s order is an act of political courage toward accountability that defies a half-century of official lies and denial. Establishing the location of those mass graves is a first step toward identifying the victims buried within and the circumstances of their deaths.

This poses a threat to an official narrative that has long silenced survivors and family members of the victims. In the government’s account, the killings are a justified and heroic response to an Indonesian Communist Party plot to overthrow the government, which began with the murder of six army generals on September 30, 1965.

There are powerful elements within the government and the security forces who would prefer that the details of those victims and their killers – state security forces and paramilitary groups under their control – remain buried and unaccounted for. Luhut, who has already challenged the enormity of the massacres by stating that the death toll was “probably less” than 1,000 victims and ruled out the possibility of an official apology for those abuses, has expressed skepticism about the existence of already well-documented mass grave sites. Powerful religious groups are also opposed to accountability for 1965-66 killings. The Indonesian Council of Ulama, the country’s highest Islamic clerical body, has cautioned that locating and excavating mass grave sites would be a socially and politically divisive policy, “tantamount to awakening the sleeping tiger.”

Elements of the government, security forces, and religious bodies have – without basis – equated moves toward justice for the victims and their family members as an effort “to revive communism.” A lack of support by senior ministers and the government bureaucracy could foil Jokowi’s plan for mass grave documentation, as it did his policy to allow foreign journalists unrestricted access to the restive region of Papua. The success of Jokowi’s efforts to start the process of redress for the 1965-66 crimes demands both domestic and international recognition of the challenges he faces and vocal support to help him overcome them. The victims of 1965-66 deserve nothing less.

Copy this HTML into your CMS
Press Ctrl-C to copy
Indonesia : Related articles 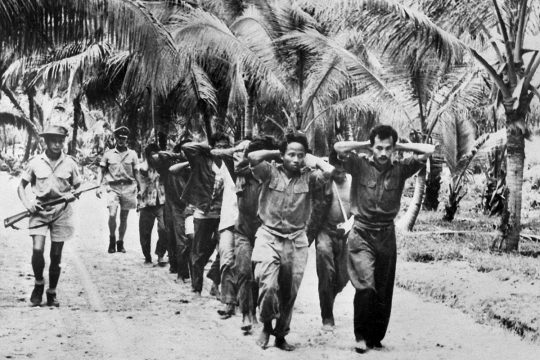 Indonesia: the Dutch no longer can see colonisation in rosy terms
Most read