JusticeInfo here publishes comments of Paris professor André Guichaoua on the July 20, 2016 arrest in Frankfurt, Germany, of Enoch Ruhigira, last head of presidential staff under Rwandan President Juvénal Habyarimana.  Professor Guichaoua is a specialist on the Great Lakes region of Africa and testified several times as an expert witness for the Prosecutor at the International Criminal Tribunal for Rwanda (ICTR), which closed at the end of 2015.

This paper presents a brief factual summary of the efforts of the Prosecutor General of Rwanda to obtain during the last fifteen years the extradition of M. Enoch Ruhigira, became a New Zealand’s citizen. From New Zealand to Germany, it describes the ups and downs of judicial cooperation with Rwanda (2005-2016).

“Summary of facts of the case: Rwanda: RUHINGIRA planned, incited and supervised the extermination of Tutsis in the province of Kibuye. On 28 April 1994, in Kibuye, RUHINGIRA organized a large meeting with the prefect of the province of Kibuye and the local leaders, with the aim of inciting and encouraging the people to exterminate the Tutsis in Kibuye province. On 30 May 1994, in Kibuye, at another meeting, which he and the prefecture leaders organized, RUHINGIRA called on people to start erecting road blocks and checkpoints to capture and exterminate Tutsis, who were trying to flee the area. On 17 June 1994, in Kibuye, during another meeting, he and the local leaders distributed pangas and machetes to the militias in order to kill Tutsis.” (Ruhingira Enoch, Fugitive wanted for prosecution, Interpol, 25 November 2004)

2016: Rwanda’s requirements anticipated by the prosecutor of Frankfurt?

“However, it is known that Mr. Enoch RUHIGIRA was not in the Country on 6th April 1994, when the President’s Plane crashed because he had remained behind in Arusha-Tanzania, but genocide in Rwanda begun from 1st October 1990 to 31st December 1994; and Enoch Ruhigira is characterized as having played a role in planning and instigating genocide, as a Minister in the President’s Office starting from 1992.

Witnesses in the file accuse him of genocide against the “BAGOGWE” Tutsi in 1992, the Killings of Tutsi in BUSEGESERA in 1992, and KIBIRIRA in Gisenyi Prefecture all killings that took place in 1992 when he was in the Country.

Witnesses in the file associate him with Col. BAGOSORA, Col. SAGATWA, Col. Anatole NSENGIYUMVA (All convicts of genocide by ICTR) and One NTIRIVAMUNDA Alphonse living in France who is also indicted and wanted for genocide.

Enoch RUHIGIRA is identified by Witnesses as a member of Escadron de la Mort (Death Squad), all these genocide activities conducted before 1994. However, they are other witnesses who confirm he was in Rwanda in 1994 during genocide.”

Which judicial cooperation with a country which organizes “politically motivated trials, the prosecution of political opponents and the prejudging of the outcome of the trial”[1]?

The University of Paris 1 Panthéon-Sorbonne

A version in German is also available on the site afrique-des-grands-lacs.univ-paris1.fr 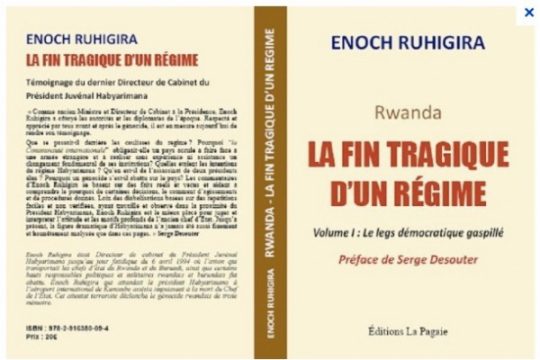