Former presidents François Bozizé and Michel Djotodia are being talked about in scarcely veiled terms as the main people behind deadly violence that has reignited in the Central African Republic since September. Although in exile and subject to international sanctions, they still have a long reach. These two ex-leaders, who have only in common that they were deposed, are accused of trying to upset a peace process from which they are excluded. Both in Bangui and at the United Nations there is now agreement on the need to neutralize their capacity for harm. But how, and when?

“All those who go against the process by creating security and political threats must be removed from the game,” United Nations Under-Secretary General for Peacekeeping Operations Hervé Ladsous told the BBC on November 17. The French diplomat reiterated the UN’s position that there will be “no new transition” in the Central African Republic. “The countries of the region agree with this,” he said. “They are to meet on the issue on November 25. There is an electoral calendar which must be respected.”

According to the electoral calendar, which has been slightly modified after the violence that left some 100 people dead in Bangui in September, the constitutional referendum initially set for October 4 will take place on December 13.  Then on December 27 there will be legislative and presidential elections, initially planned for October 18. If a second round is necessary, it will be held on January 31, that is, one month after the end of the transition period. These new dates are expected to be approved at a November 25 summit by the Economic Community of Central African States (ECCAS), which is now overseeing this former French colony. Hervé Ladsous stressed that 93% of potential voters in the CAR have already registered. “Never has the Central African Republic had so many potential voters registered,” he said. “It’s a very strong political signal.”

Ladsous seems to have been reacting to the “political agreement” reached on November 13 in Bangui by members of the “extended Consultative Body” of political parties, political associations and independent political personalities. At the end of its meeting, this Consultative Body called for a new transition period after December 30. According to this document signed by some 50 political parties and civil society organizations, an additional 18-month transition period is necessary to restore security, reconcile Central Africans, implement the Disarmament, Demobilization and Reintegration (DDR) programme for former fighters, create a national army that reflects all the regions of the country and organize peaceful, inclusive, transparent elections. The signatories said the new electoral calendar remains “unrealistic and dangerous” and called for the National Elections Authority (ANE) to finalize the electoral register before even thinking about holding élections.

“The November 13 agreement is a non-event”

For the interim government of Catherine Samba-Panza, the November 13 initiative is simply part of a sabotage plan organized by former leaders in exile. “This famous agreement of November 13 is a non-event in the eyes of the transition authorities,” presidential advisor Clément-Anicet Guiyama said on Wednesday. “It has no legal validity because for the foreseeable future the transition is governed by the Constitutional Charter on the transition, and there is no path outside that.

“This agreement is just another of many attempts by all those who are trying from Nairobi to alter events to their liking, without taking the will of the Central African people into account,” he continued. Speaking on Radio Ndeke Luka, he called the signatories of the accord “ineligible, penniless people and torturers of the Central African population, who do not have the means to fight elections”.

“Those who are trying from Nairobi to alter events to their liking”? This phrase dear to the Panza government refers notably to exiled former Central African  presidents François Bozizé and Michel Djotodia. The two, considered to be those most responsible for the current crisis, signed a reconciliation agreement for the CAR in Nairobi, Kenya, in April. The Nairobi agreement, signed under the auspices of regional mediator Denis Sassou N'Guesso (Republic of Congo), calls for a ceasefire, and for the parties to respect the organization of elections and transition process. This accord, rejected by Bangui, is seen by observers as an attempt by the two ex-presidents to force entry into the peace process, from which they are excluded because they are strongly suspected of abuses.

François Bozizé was ousted in March 2013 by Seleka rebels who bled the country for 10 months. The Seleka, a disparate coalition that was hard to control, in turn lost power as transition president Michel Djotodia was forced to step down under international pressure on January 10, 2014. Another militia, the Anti-Balaka which started as civil defence, almost immediately started spreading more terror in the country, targeting attacks particularly at Moslems. Many Anti-Balaka are said to be close to Bozizé.

If the two former Heads of State in exile are among those Hervé Ladsous accuses of being “against the process by creating security and political threats”, how can they be disabled from causing harm?

Catherine Samba-Panza says the UN and international justice should get hold of them. Convinced that they are manipulating Central Africans, the transition president called in early November for the “UN sanctions committee, the International Criminal Court and the countries concerned to deploy all efforts to apply sanctions on political leaders implicated in the violence, so that they be arrested or brought to justice to account for their actions”. In this message to the nation, Catherine Samba-Panza called on Central Africans to “go resolutely to elections”, rather than follow these figures “whose future is uncertain”.

Even if many in politics and civil society accuse the President of only repeating the messages of the international community that is propping her government up, some prominent leaders believe it is time to emerge from the long transition. Among them is former Prime Minister Martin Ziguélé, one of the first six people to have filed their candidacies for the presidency on November 14, in line with the new electoral calendar. Martin Ziguélé, leader of the Movement for the Liberation of the Central African People (MLPC) and considered a leading contender for the presidency, said in a recent interview with AFRIK.COM that the vote should be held “as soon as possible”, even if he also recognized that “the violence targeting civilian populations in Bangui and other places like Bambari could compromise the electoral process if vigorous action is not taken to counter it”. He believes international forces deployed in the CAR need to adapt their strategies as a consequence. “This is urgent, because all those who want to maintain the status quo are determined to upset the electoral process,” he said. “They need to be disabled from causing harm.” 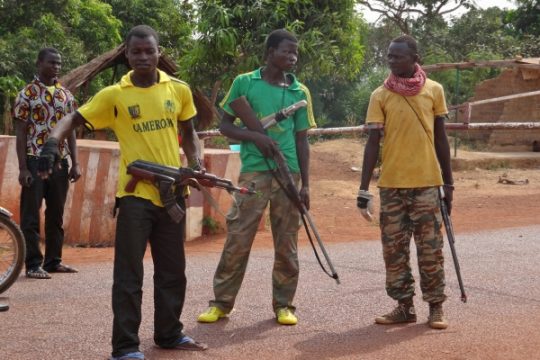