Fear, rumours and the sound of fighting accompanied Frontier on a precarious journey through the battle zone in Myanmar’s northeastern Shan State.

The disruption and fear created when an alliance of ethnic armed groups went on the attack in northeastern Shan State last month was clearly evident during a journey through the battle zone.The fighting began on November 20 when the Alliance of the Northern Brotherhood launched coordinated attacks on government and other targets, disrupting traffic on the main highway to Muse, a busy trading town on the border with China.

The alliance, linking the Kachin Independence Army, Arakan Army, Ta’ang National Liberation Army and Myanmar National Democratic Alliance Army, said it launched the attacks in response to “pressure” from the Tatmadaw (Myanmar’s army). The attacks have left at least 10 people dead, displaced thousands of civilians and dealt a serious setback to the peace process and efforts to persuade the four groups to sign a national ceasefire agreement.

Frontier’s journey through the battle zone began in Lashio on November 22. Muse is about 170 kilometres to the north along winding mountain roads. Some Lashio residents said road conditions were terrible and advised us not to proceed. However, taxi drivers assured us it was possible to travel the 75km to Kutkai, the biggest town between Lashio and Muse. For safety’s sake, we opted to travel during the day. 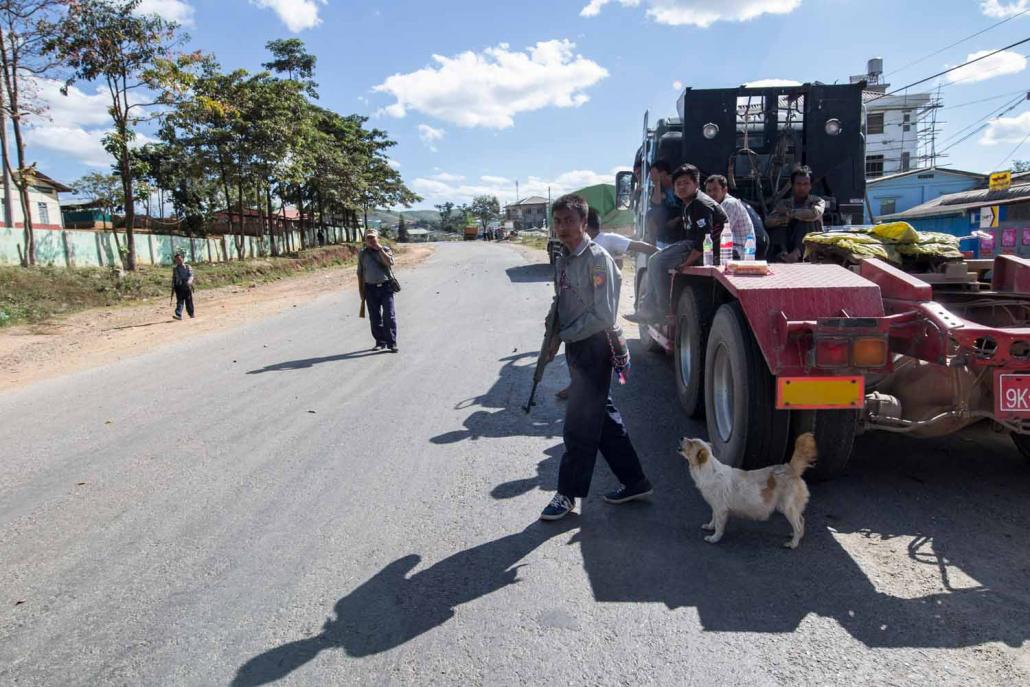 Before we left for the battle zone, we had been led to believe by government statements and posts on social media by the Northern Brotherhood that the fighting had caused serious damage and disruption in towns and villages along the highway. However, the situation along the highway was not as serious as we had expected and we were able to reach Muse in a day.

At Hseni, about 50km from Lashio, a few Tatmadaw and militia troops were guarding a bridge that had been damaged by a bomb. Sources in Lashio said the bridge was damaged when the alliance launched its attacks. Hseni residents described the security situation as “normal”.

According to Tatmadaw sources and statements by the alliance it was not possible to travel from Hseni to Muse. However, a steady stream of big 22-wheel trucks was passing through the town toward Muse.

Our driver said he would take us only as far as Kutkai because he was too frightened to travel to Muse. We spent the night of November 22 in Kutkai.

The market was quiet and most noodle shops were closed, though we found one that was open. Its Sino-Myanmar proprietor said the fighting had triggered panic in the town. “Some were in a big hurry to get their stuff packed and some didn’t open their shops and when I asked why they weren’t really sure,” she said.

“Some shouted, ‘Run, run’ and others followed, but they didn’t know what was happening,” said the woman, who added that her noodle shop had opened every day as usual since November 20.

Kutkai residents said they had heard artillery and small arms fire at night in the hills around the town but could not say where the fighting was occurring.

The precarious security situation created by the fighting was illustrated in Kutkai by the sight of a Tatmadaw major dining on a bowl of noodles while guarded by four soldiers. “We can’t trust anybody,” one of the soldiers told Frontier.

A challenge for the Tatmadaw has been distinguishing between civilians and alliance fighters, who are not wearing uniforms.

There were no drivers in Kutkai willing to take us to Muse. We found two motorbike taxis who wanted an exorbitant K35,000 each to take us as far as Nantphatkar, about 52km south of Muse.

Although our trip to Nantphatkar was without incident, the motorbike taxi drivers dared not travel any further. They had reason to be nervous. After the fighting began the alliance was blamed for shooting dead two truck drivers between Nantphatkar and Muse. Fortunately, we found a taxi driver who was prepared to drive to Muse.

At Hankai village, half of the highway was blocked by two small trucks with no tyres; soldiers from the ethnic armed groups had stopped the vehicles, parked them across the highway horizontally, shot out their tyres and taken the keys.

The truck driver, who had sent his assistant to Muse to buy new tyres because he dared not ask residents for help, told us to leave the village as soon as possible. “They are probably watching us,” he said, indicating to the nearby hills.

Our next stop was Namawng village, where dozens of 22-wheel trucks had been forced to halt because of fighting ahead. “Do not continue your journey,” the truck drivers warned.

They said the fighting was at Tarlon and Mawtaung village tracts. We waited at Namawng for about two hours, until some vans travelling from Muse passed through the village and their drivers shouted that the highway was open. The big trucks roared into life and quickly left for the border.

We stopped briefly at Nampaw, where the alliance had damaged another bridge. From Nampaw to Muse the road was fine and we travelled non-stop, arriving in the border town about 5pm on November 23.

During our stay in Muse we constantly heard rumours about the fighting but nothing could be confirmed. In the towns and villages through which we passed and at the 105-mile trading zone in Muse Township, rumours were rampant. Almost everyone was relying on Facebook as a source of information.

Some of the heaviest fighting since the Northern Brotherhood launched its offensive has been in and around Mong Koe, on the border with China in eastern Muse Township.

For now, the conflict continues in spite of efforts to broker a ceasefire. On December 2, a government peace team led by Dr Tin Myo Win planned to meet representatives of the four groups in Kunming, China, at a meeting arranged by the Chinese government.

However, the talks were cancelled because the peace team wanted to hold two separate meetings: one with the KIO, and the other with the TNLA, MNDAA and AA. The ethnic armed groups demanded a single meeting.

The same day, media reports said that the four armed groups sent a message to the Chinese government that they would be willing to enter talks at a later date if the peace team agreed to a single meeting with them.

Following the failure of the talks, the Tatmadaw said in a statement that the armed groups had launched renewed offensives on December 3. Any semblance of peace, it seems, remains some way off for northern Shan State.

Copy this HTML into your CMS
Press Ctrl-C to copy
Related articles
Two months on, renewed humanitarian access call in Myanmar's northern Rakhine state
Myanmar pursuing 'ethnic cleansing' of Rohingya: UN official
A year after ceasefire deal, what hope for peace in Myanmar?
Myanmar’s transition and the prognosis for reform of the justice sector
Myanmar : Related articles
Is there a right methodology to document war crimes in Myanmar, Syria, Iraq or Ukraine?
Five years after the crackdown on Rohingya, “it’s getting worse and worse”
Most read
Did Christopher Columbus commit genocide?
Sexual abuse in the Church: map of justice worldwide
Reconciliation - Related articles
The Colombian president Gustavo Petro opens door to a new transitional justice system
Colombia: the day FARC leaders faced victims of kidnappings