Just days after long-time Gambian President Yahya Jammeh went into exile following electoral defeat and the threat of regional military intervention, his former Interior Minister Ousman Sonko has been arrested in Switzerland. This comes after Geneva-based NGO TRIAL International filed a criminal complaint to the authorities in Berne, where Sanko had applied for asylum. Sonko was Interior Minister from 2006 until he was dismissed by Jammeh in September 2016. So what are the allegations against him? JusticeInfo spoke to Bénédict De Moerloose, head of the Criminal Law and Investigation division at TRIAL International:

Bénédict De Moerloose: As Interior Minister of The Gambia from 2006 to 2016, Sonko was head of the police and he was also in charge of detention facilities. The police have been accused of widespread acts of torture particularly against dissidents, opponents and journalists, so the accusation is torture, either as a direct perpetrator or as an accessory. However, the investigating authorities in the canton of Berne have now re-categorized the alleged crimes as crimes against humanity, which means the case is likely, under Swiss law, to be referred to the federal authorities.

The crimes are said to have been numerous. It was allegedly a very repressive and dictatorial regime under Jammeh and Ousman Sonko, who was one of his right-hand men. Arbitrary detentions appear to have been a speciality of the regime, along with torture and other atrocities. It is said to have been a joint responsibility of the police who were under Ousman Sonko and the police falling under the presidency, the National Intelligence Agency (NIA). So there are many cases where police carried out arrests and then handed people over to the NIA, allegedly to be tortured. But even if the suspects were then in the hands of the NIA, under Gambian law it is the Interior Minister who has responsibility for places of detention.

JI: On what evidence are your accusations based?

BDM: We have gathered evidence based primarily on reports from sources like Amnesty International, Human Rights Watch and special rapporteurs on torture and extra-judicial executions. There are also decisions from the regional ECOWAS court accusing Gambia of torture, so there is a wide consensus on the practice of torture by the former Gambian regime. We have also been able to talk to experts and human rights lawyers who have confirmed those accusations. And we are continuing the investigations.

JI: Where is Ousman Sonko now and has he been arrested?

BDM: According to reports he has been arrested and is being questioned by police in the canton of Berne.

BDM: We don’t know his exact trail, but apparently he filed an asylum request in Sweden and Spain and then in Switzerland. He has been here in Switzerland for almost two months. We filed a case of torture and under Swiss law, torture cases are dealt with by the regional cantonal authorities, whereas genocide, crimes against humanity and war crimes fall under the Federal prosecuting authorities. However, the crimes have now been characterized as crimes against humanity, as I said.

JI: What happens now? Do you think the Swiss authorities will open a case?

BDM: The authorities, who have opened a criminal investigation, are now obliged under the Swiss Criminal Code and the Torture Convention to thoroughly investigate the case.

JI: If the investigations were to result in a trial, wouldn’t that be ironic given that Sonko’s former boss Yahya Jammeh seems to have got some kind of immunity in exchange for stepping down peacefully?

BDM: It would be an important step for justice. And it would be even more important if others manage to obtain some kind of amnesty or immunity and impunity still prevails.  It is already a very important sign for the victims that he has been arrested, and if he were brought to trial it would be an even stronger sign. It could also be a trigger for other prosecutions. 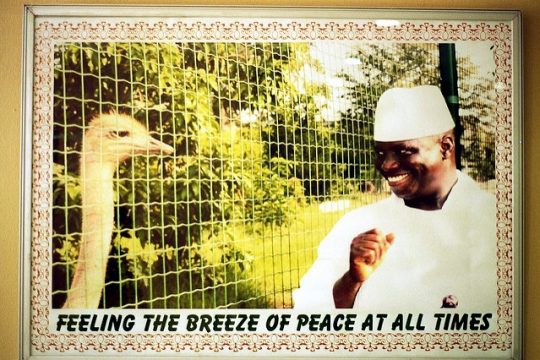