Plans are underway to hold the next Union Peace Conference at the end of this month, but the government and non-signatories of a 2015 peace agreement cannot agree how to tackle the thorny issue of how to bring peace to Myanmar.

February 12 marks 70 years since independence hero Bogyoke Aung San met with Shan, Kachin and Chin leaders in the Shan State town of Panglong and signed an agreement that would grant their territories full autonomy within 10 years.

But the pact was never fulfilled. Shortly after achieving independence in January 1948, the country plunged into a decades-long civil war that remains active today.

In 2011 the quasi-civilian government led by former president U Thein Sein embarked on a fresh approach to the peace process, aimed at finally bringing truly nationwide peace to the country. It was an approach that had some limited success.

In October 2015 eight non-state armed groups signed the so-called Nationwide Ceasefire Agreement with the government. The most notable scalp for the government was the signature of long-term adversary the Karen National Union, but larger and more influential groups like the United Wa State Army and the Kachin Independence Army, who have an estimated 30,000 and 10,000 troops respectively, refused to sign.

In one of her first major speeches after the National League for Democracy won a landslide victory in the 2015 election, Daw Aung San Suu Kyi said the government would make peace their “first priority”. In August, the government held its first peace summit, billed as the 21st Century Panglong Union Peace Conference – a nod to the agreement signed in 1947 – in Nay Pyi Taw.

Demonstrators participate in a protest in Yangon on February 4 calling for an end to civil war in Myanmar. (Steve Tickner / Frontier)

Despite some setbacks – notably the UWSA delegation walking out on the second day and the lack of invitation for three groups involved in fighting with the Tatmadaw (Myanmar national army) – the conference was regarded as a success, albeit largely symbolic.

But that was about as good as things got for the peace process. The second half of 2016 saw a spike in fighting between the Tatmadaw and the KIA close to the latter’s stronghold of Laiza on the Chinese border. That fighting was linked to the decision by a coalition of four ethnic armed groups – calling itself the Northern Alliance and comprising the KIA, the Ta’ang National Liberation Army, the Myanmar National Democratic Alliance Army and the Arakan Army – to launch offensives on Tatmadaw outposts in the north of the country in November.

Against this backdrop, a second Union Peace Conference under the new government, and the third since the NCA was signed, will take place in Nay Pyi Taw on February 28. The date was confirmed after a meeting of the Union Peace Dialogue Joint Committee in the capital on January 6.

“But we cannot say whether the non-signatory ethnic armed groups, such as the KIA, will attend or not,” said U Zaw Htay, director general of the President’s Office. “Preparations will be made over the coming days and we will negotiate with the non-signatories,” he said.

On July 25 last year U Khaing Myo Tun, deputy information minister for the Arakan Liberation Party, which signed the 2015 accord, was arrested after the ALP published a report accusing the Tatmadaw of forcing Rakhine civilians to act as porters and human shields during fighting in the state. He is being charged under sections 505(b) and 505(c) of the penal code, which are related to sedition and incitement.

A soldier from the Kachin Independence Army fires a shot during fighting with Myanmar army soldiers near Laiza, Kachin State, in late 2013. (Steve Tickner / Frontier)

On December 28 U Min Htay, a central committee member of the All Burma Students’ Democratic Front, another NCA signatory, was arrested in Momauk Township, Kachin State. He is being charged under article 17(1) of the unlawful associations act.

In a meeting between Aung San Suu Kyi and Peace Process Steering Team members in Nay Pyi Taw in January, the government was urged to ensure that all Myanmar’s ethnic armed groups are invited to the next peace conference, said Satt Khun Sai, an adviser to the PPST and executive member of the Restoration Council of Shan State.

“If we cannot do that then we need to move the date of the conference,” he said.

Khun Sai said that a meeting between the ethnic armed groups, including the NCA non-signatories, and the government would help to build trust.

“We know what self-administration means, but we need to clarify the meaning of self-determination. The military thinks that it means to separate from the country, but it does not mean that. So we need to have this discussion,” he said.

“If they only invite the groups that they have reached agreement with, then they will be heavily criticised for their approach to the peace process,” he said.

He said the UPDJC will hold a meeting in February to discuss its approach for the upcoming peace conference.

On the northern front

After four months of intense fighting, the Tatmadaw took the strategic Gidon outpost in Kachin State from the KIA on December 16. Within the next month, four more KIA outposts – Lai Phong, Hpau Daw, Law Hpyuk and Ngagyang – fell into Myanmar Army hands, said a KIA intelligence officer who spoke to Frontier on the condition of anonymity in Laiza last month.

In addition to the fighting near Laiza and in northern Shan State, the officer said there were smaller battles near Mansi Township, in southern Kachin State, between the KIA and government troops.

He questioned whether the Tatmadaw could maintain fighting on so many fronts and said he was confident that the KIA could hold onto Laiza throughout the rainy season, but that they would struggle under aerial bombardment.

“Our leaders are looking at new strategies. We are already digging much stronger and deeper bunkers against the aerial attacks,” he said.

In January, Reuters reported that the United Wa State Party, the political arm of the UWSA, will hold elections this year for the first time since 1989, citing three senior Wa officials. One official quoted in the report said the vote would be “earth shattering”.

The UWSA is Myanmar’s largest ethnic armed group and is closely affiliated to China. The UWSA, who are skeptical about the NCA, are regarded as having a strong influence on the smaller groups operating near the Chinese border.

Ms Yun Sun, a senior associate at the Washington-based Henry L Stimson Centre, a global security think-tank, and former China analyst for the London-based International Crisis Group, told Frontier that the UWSA’s view of the NCA was unlikely to have changed in the past six months.

“If anything, the resumed conflict has made UWSA less likely to make concessions,” she said.

“The new leadership of the Wa is expected to have more strategic and constructive thinking on the peace process,” she said of the upcoming vote. “If the current stalemate is to have a solution, it will need UWSA to demonstrate political leadership, courage and wisdom.

Regarding the UWSA delegation walk-out at the peace conference in Nay Pyi Taw, Sun believes that the group was treated poorly treated by the government.

“The reason that the UWSA walked out of the UPC was that they felt they were treated unfairly by being given the identification cards of observers, rather than for formal participants at the UPC. I am aware that there are arguments that the UWSA could have been more tolerant of the ‘mistake’, but we are talking about a civil war and the largest armed group here. You’d think that the government would have treated it with a little more care and respect,” she told Frontier.

Representatives from both the United Nationalities Federal Council, which is led by the KIA and includes non-NCA signatories, and the Northern Alliance told Frontier that they wanted to see an end to conflict and for discussions to be held with the government.

On February 2, the Myanmar Times reported that the KIA had received a letter from the peace commission inviting them to attend a bilateral meeting with the government.

The UNFC has put forward a nine-point proposal for signing the NCA, including an end to conflict, changes to the 2008 constitution and the granting of self-determination, equality and freedom “in accordance with the Panglong spirit”.

“We have not yet had any agreement on the nine points and are still in discussions with the government,” said Ku Oo Rai, secretary general of the UNFC and vice chairman of the Karenni National Progressive Party.

A banner from the February 4 anti-war protest in downtown Yangon. (Steve Tickner / Frontier)

U Hla Maung Shwe, a member of the Peace Commission under the National Reconciliation and Peace Centre, said there are plans to hold discussions with the Northern Alliance ahead of the next peace conference.

“We are contacting the group for peace talks to see how they can be involved in the conference, but we haven’t set a date for the meeting,” he said.

A sticking point for the government and the non-signatories is the process of signing the NCA. The government has told the groups that if they sign the agreement, fighting will subside. For their part, the ethnic armed groups say they will not sign the accord until fighting stops.

Dr Thin Myo Win, chairman of the NRPC, told Frontier that it is “too early” to discuss the government’s plan to try and bring members of the Northern Alliance into an agreement to sign the NCA.

What seems clear is that compromise is required from all sides.

U Maung Maung Soe, an independent researcher on Myanmar’s peace process, urged the government to ensure that the next peace conference is all-inclusive.

“What I want to say is that the military and government need to cooperate [with other groups] on the peace process, because they cannot do it on their own.” 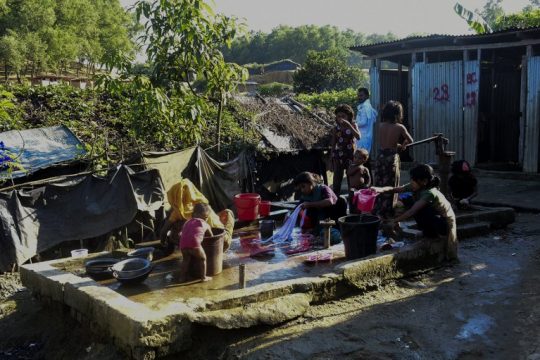 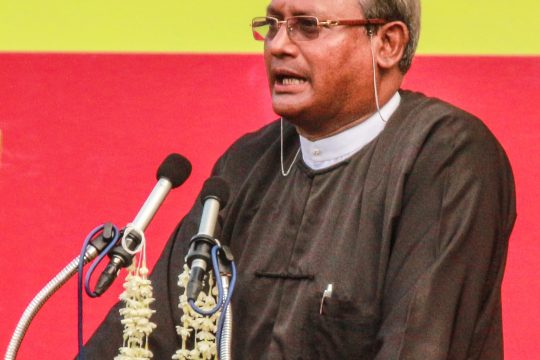 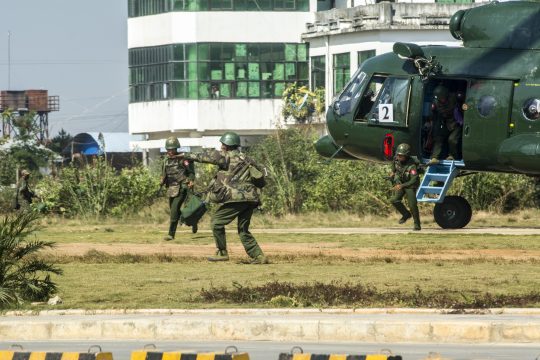 Journey through a battle zone in Myanmar
Myanmar : Related articles