Gambians want swift justice for the crimes of fallen dictator Yahya Jammeh’s regime but the new government faces an uphill battle to jail the most prolific abusers.

Silenced for 22 years, victims shot or tortured by Jammeh’s security services are now speaking out, along with families whose loved ones have been pulled from recently found unmarked graves.

But the cash-strapped government refuses to put anyone else in the dock, burnt by a high-profile, politically charged case this year that has run into procedural and systemic problems.

“In terms of prosecutions, we are not at that stage yet,” Justice Minister Abubacarr Tambadou told AFP in his dimly-lit office in central Banjul, reams of paperwork covering his desk.

An overhaul of The Gambia’s beleaguered courts, where judges were long accused of following the will of the president, not the law, is needed to ensure “successful prosecutions”, the softly-spoken Tambadou said.

Thanks to his previous experience at the International Criminal Tribunal for Rwanda (ICTR), he is part of a global network of transitional justice experts, whose skills he now wants to call on as he embarks on reforms.

“We have inherited a broken criminal justice system and we need to fix that before we can move forward with any other plans,” he stressed.

The case of the “NIA Nine” — the trial of the former head of the Jammeh-controlled National Intelligence Agency (NIA) and eight subordinates from the feared security service — is seen as a warning against haste.

A lack of evidence and calls for more time by lawyers have repeatedly delayed the case against the men accused of killing opposition political activist Solo Sandeng last year.

His death sparked a reform movement that eventually unseated Jammeh, who was forced from office in January by west African powers after he refused to accept defeat in a December election.

“It doesn’t seem like the judicial system is ready for serious trials,” said Reed Brody, a US-based lawyer, who helped the victims of Chad’s former dictator Hissene Habre prosecute him successfully more than a quarter century after leaving power.

“It’s not enough to have victims. You need to have people who can prove the individual responsibility of a higher-up,” he added, after a recent visit to Banjul, saying this was doubly important if the state ever decided to prosecute Jammeh himself.

Switzerland has extended the detention of former Gambian interior minister Ousman Sonko over a crimes against humanity probe, but has ruled out extradition on the grounds the country maintains the death penalty and lacks the legal capacity to try him.

Souleymane Guengueng, a Chadian who campaigned for almost 25 years before seeing Habre convicted in 2016, travelled with Brody to advise the Gambian victims.

“Even if you have all the right conditions, the documents, everything, you have to consider the political aspect. You have to look at the economic aspect,” he told AFP, warning it could be a long process.

But tensions are rising over when justice will be delivered and the pressure on Tambadou and President Adama Barrow grows by the day, as those with a newfound right to exercise their freedom of speech hold press conferences and marches for justice in a country where, until January, protests were all but illegal.

For some, the urgency is not for psychological closure but something more practical: constant medical bills to manage a permanent disability dealt them by the security forces.

Yusupha Mbye was just 18 when he was shot in the spine by a soldier as he passed a student march in 2000 that was brutally put down by Jammeh’s forces, killing 14.

He has constantly struggled to pay his medical expenses and provide for his family, with his legs paralysed.

“My life was destroyed because that was when my schooling stopped,” he told AFP, at a march organised by the newly formed Committee for Victims of Jammeh’s Atrocities.

“I didn’t get anything from the government. I want the new government to help me get my treatment. I want my health first, and then justice,” he added.

Others want to turn the page after years of horrors.

At his compound in a Banjul suburb, Malleh Jagne describes meeting other victims and helping raise awareness for their plight through media appearances, although he has yet to win justice for his family.

In March, Jagne found himself standing over the hastily dug grave where his brother was thrown after being accused by the regime of involvement in a December 2014 coup attempt.

“I straight away identified him because he was in the uniform trousers”, Jagne said, referring to the US army fatigues his brother Lamin was given while serving as a captain.

Since then, he has pushed for answers. “I wanted to know how my brother was killed: was he shot? Was he beaten to death? The question wasn’t answered. It’s something that’s disturbing my mind,” he said.

Jagne himself was detained by the NIA for 35 days once he was identified as a close relative of Lamin, and recalls being whipped, slapped, refused permission to relieve himself, and given dry rice to eat until he was weak from illness.

Another of Jagne’s brothers was shot in the stomach by Jammeh’s men and survived and his wife died while he was living in exile in neighbouring Senegal.

“If justice is delayed, the pain is still there,” he said.

“My brother (Lamin) has two kids in the United States and they keep on asking me ‘When is my daddy coming’?” 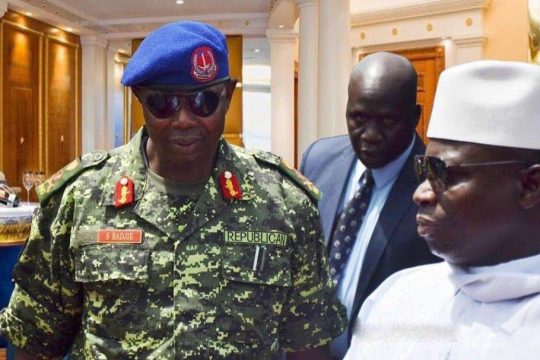 Gambia: Will the government prosecute returned Jammeh hit-men
Most read