The widespread rights abuses committed against protestors in Venezuela indicate that the country has implemented a policy of repression aimed at instilling fear in the population, the UN said Wednesday.

A fresh UN report warned that the rights situation in Venezuela was at "grave risk" of unravelling further as the authorities continue to systematically and brutally repress demonstrators, and urged international action.

The extent of the violations "points to the existence of a policy to repress political dissent and instil fear in the population to curb demonstrations at the cost of Venezuelans' rights and freedoms," the report from the UN human rights office said.

"The generalised and systematic use of excessive force during demonstrations and the arbitrary detention of protesters and perceived political opponents indicate that these were not the illegal or rogue acts of isolated officials," it stressed.

Venezuela, which is suffering from an acute economic crisis marked by shortages of basic goods, has experienced months of street demonstrations against President Nicolas Maduro that have left 125 people dead, according to prosecutors.

Wednesday's report found that security forces and pro-government groups were responsible for at least 73 of the protester deaths.

It remained unclear who was behind the remaining deaths, the rights office said.

UN rights chief Zeid Ra'ad Al Hussein also pointed out that his office had documented "serious violations of due process and patterns of ill-treatment, in some cases amounting to torture."

The tactics listed in the report included "the use of electric shocks, severe beatings, stress positions, suffocation, and threats of sexual violence and death."

After receiving no response to repeated requests for access to Venezuela to investigate the situation in the country, Zeid deployed a team of human rights officers to monitor the country remotely.

The investigators conducted 135 interviews between June 6 and July 31 with victims and their families, witnesses, civil society organisations, journalists, lawyers and doctors, among others.

Earlier this month, the UN rights office released a few preliminary findings suggesting that the country's security and police forces had "systematically used disproportionate force to instil fear, crush dissent, and to prevent demonstrators from assembling."

"The right to peaceful assembly was systematically violated, with protesters and people identified as political opponents detained in great numbers," Zeid said in a statement Wednesday.

More than 5,000 people have been detained in Venezuela since April 1, with more than 1,000 still held by the end of July, the report found.

It also pointed to repeated attacks on journalists and media workers that "appeared to be intended to prevent them from covering protests."

While acknowledging that the number of demonstrations, detentions and deaths had decreased in recent weeks, Zeid expressed concern at efforts to criminalise Venezuela's political opposition.

The country's all-powerful new constituent assembly for instance announced Tuesday it would hold treason trials for opposition leaders it said are promoting economic sanctions imposed by the United States.

"The commission ... does not meet the basic requirements of transparency and impartiality to conduct independent and non-political motivated investigations on the human rights violations and abuses," he said.

Wednesday's report called on the UN Human Rights Council to "consider taking measures to prevent further deterioration of the human rights situation" in Venezuela, which currently holds a seat on the council.

Copy this HTML into your CMS
Press Ctrl-C to copy
Venezuela : Related articles

Venezuela and the ICC: who’s fooling who? 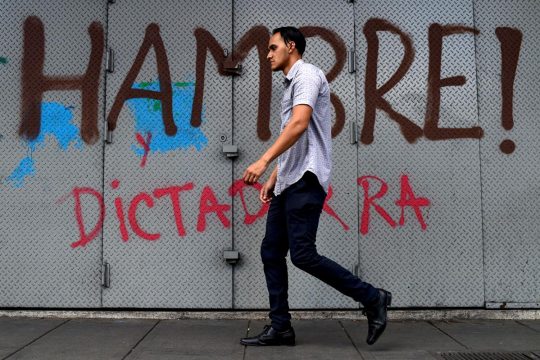 Latin American states to refer Venezuela to the ICC
Most read