Arab leaders at a summit in Saudi Arabia have slammed Washington’s decision to recognise Jerusalem as Israel’s capital and move its embassy there, but analysts say their words are unlikely to lead to action.

The shift by US President Donald Trump has sparked deep anger across the Arab world, particularly among Palestinians, who see East Jerusalem as the capital of their future state.

But it seemed clear at the Arab League summit, held in the eastern city of Dhahran on Sunday, that regional rulers, particularly in the Gulf, are unwilling to jeopardise close ties with Trump as they seek to counter Iran.

“Generally, Arab League summits produce more rhetoric than action,” said Denis Bauchard, an expert from the French Institute on International Relations. “I don’t think this will go beyond declarations.”

For Riyadh, he said, “what is essential is the relationship with Washington”.

Israel occupied mainly Palestinian east Jerusalem and the surrounding region in the 1967 Six-Day War and later annexed it, declaring the city its capital.

Neither move was recognised by the international community — but the United States is now set to shift its embassy from Tel Aviv to Jerusalem in May.

That breaks with decades of US policy and international consensus that the status of the city should be settled in negotiations.

“Ordinary people and politicians alike understand the dismal state of Arab affairs, and no Arab government is going to confront Trump,” she said.

Saudi King Salman dubbed the Dhahran conference the “Jerusalem summit” and used his opening speech to denounce Washington’s decision and announce a $150 million donation for the maintenance of Islamic heritage in the eastern part of the holy city.

Other leaders queued up to add their criticism, and the summit’s final statement also slammed Trump’s move.

But an Arab diplomat, who asked not to be named, said that “even Washington’s allies (Riyadh, Abu Dhabi and Cairo) know very well that they don’t have many diplomatic options”.

“Their aim is to improve the situation of the Palestinians as much as possible, but they won’t go as far as confronting” the Trump administration, the diplomat said.

Ghassan Khatib, a Palestinian academic and former minister, said they were “not capable” of doing so, “especially with all the problems in the Arab world”.

He said Arab governments were “not willing to risk their relationships with the United States.”

The American decision on Jerusalem comes as ties warm between the US and key allies in the region — Saudi Arabia, Egypt and the United Arab Emirates.

That follows years of tension under former president Barack Obama as Washington improved ties with Iran, culminating in a historic 2015 deal to lift sanctions in exchange for curbs on Tehran’s nuclear programme.

Saudi Arabia and Iran have spent years fighting proxy wars across the region, from Syria to Yemen.

Trump has openly sided with Riyadh and threatened to back out of the Iran nuclear accord — possibly also in May.

“Saudi Arabia and the UAE… have felt since the nuclear deal with Iran that Washington was not taking into account their concerns about Iran’s strong presence in the region,” said Khalil Harb, editor of Journal, an Arabic-language website focusing on Gulf affairs.

The two countries are now trying “to push the Trump administration… to review the American position on the nuclear deal. At a political moment like this, Riyadh doesn’t want to embarrass or anger America,” he said.

Karim Bitar, from the Paris-based Institute of International and Strategic Affairs, said those states are “so concerned with the Iranian threat that they realise that they might have to coordinate the anti-Iranian effort with the US and Israel.”

Amid the controversy surrounding Trump’s decision on Jerusalem, observers have said the move could spark renewed violence in the region.

But there have been growing signs of a diplomatic opening between Saudi Arabia and Israel.

Saudi Arabia’s powerful Crown Prince Mohammed bin Salman, the 32-year-old son of the king and heir to the region’s most powerful throne, said during a US tour days before the summit that Israel also had a right to its own land.

King Salman called Trump hours later to reaffirm the kingdom’s support for “the legitimate rights of the Palestinian people to establish their own independent state with its capital in Jerusalem”.

It argued that “the Arabs must realise that Iran is more dangerous to them than Israel.”

In an unprecedented statement for Saudi newspaper, it said: “The Arabs have no other option than reconciliation with Israel, signing a comprehensive peace agreement and freeing themselves up to tackle the Iranian project in the region.”

Support Us
CONTRIBUTE TO INDEPENDENT INFORMATION ON INTERNATIONAL JUSTICE
Across the world, access to justice and information is vital for societies to rebuild after periods of serious violence. This is why we are dedicated to offering a free website adhering to strict journalistic methods which is accessible to everyone in the developed and developing world. Justice Info is funded by donations. Each donation helps our journalists bring you independent information. A regular donation is ideal. We are also grateful for one-off donations.
SUPPORT US
Palestine : Related articles

12 min 14
Palestine Situation before the ICC: reflections and views of Israel 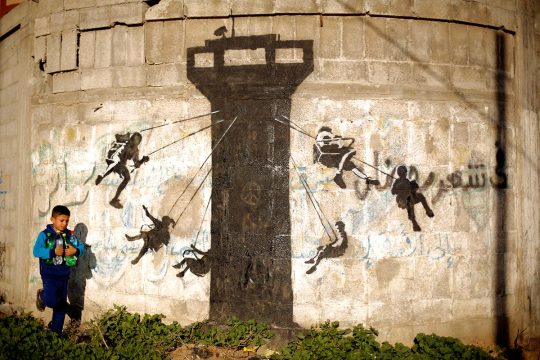 8 min 14
ICC/Palestine: When do states recognise states?
Most read