Through a reign of terror and a ruinous economic policy, the ZANU-PF Government of Zimbabwe [GoZ] not only violated the rights of Zimbabweans but broke the relationship between the Government and its citizens. In order to rebuild Zimbabwe, the broken relationship must be mended.

As African elders say, “the ruin of a nation begins in the homes of its people”. The recently initiated transitional justice processes such as the national peace and reconciliation have the potential to fix the relationship between the GoZ and its citizens. Nevertheless, while scholars and organisations may agree on the need for transitional justice in Zimbabwe, the fundamental question is whether there can be transitional justice without a meaningful transition of political power first, and further, whether such transitional justice can succeed without taking into account victims of political persecution living in the diaspora. These are the questions that this post focuses on.

Mugabe’s rule was characterised by gross human rights violations such as those in Gukurahundi (1983-7), where about 20000 civilians were massacred, Operation Murambatsvina (2005), where about 700000 people were displaced after the GoZ destroyed their houses and Operation Makavhotera Papi (2008) where thousands were tortured and killed for voting for opposition political parties. Many victims sought political asylum in foreign countries. While many victims lost the hope for justice during Mugabe’s reign, they hoped for transitional justice post-Mugabe. Eventually, Mnangagwa ousted Mugabe in November 2017 through a military coup. Less than two months into his presidency, Mnangagwa signed into law a critical legislation for transitional justice processes – the National Peace and Reconciliation Commission Act [the Act]. Mnangagwa has since appointed Commissioners of the National Peace and Reconciliation Commission [the Commission]. These Commissioners are already reaching out to affected communities.

Transitional justice without transition of power?

It is unlikely for transitional justice processes to succeed without first attaining a substantive transition of political power. Often, justice cannot be served against powerful politicians in office because they wield the power to compromise the justice system, e.g. by covering the truth or intimidating witnesses.Victims are afraid to participate in a justice system that is weak in face of the powers of the perpetrator. The African proverb “what is said over the dead lion’s body cannot be said to him alive” reveals this important component of transitional justice. Transitional justice presupposes the removal of the perpetrator from power or at the very minimum, the weakening of their power. For victims, transitional justice entails seeing a once powerful perpetrator who, after power transition, is now just an ordinary man.The fall of Mugabe did not result in any meaningful transition of power. His counterparts in human rights violations – people like Mnangagwa – remain in power. Those accused of corruption and of being responsible for the suffering of Zimbabwean economic refugees are also still in power. In international human rights law, victims have a right to truth. Furthermore, Vroomen has correctly emphasised the importance of truth as one of the core elements of transitional justice processes. Yet, when those accused of human rights violations are still in power and interested in retaining that power, they cannot allow the truth to become public.

There are already incidents in Zimbabwe that show the impossibility of knowing the truth while those accused of human rights violations are still in power. The GoZ appointed the Dumbutshena and Chihambakwe Commissions in 1981 and 1984 respectively to investigate the Entumbane and Gukurahundi Massacres. Both of the judge-led Commissions came up with reports which the GoZ refuses to publish. Victims have repeatedly demanded the publication of these reports and recently approached the courts. It is not surprising that victims refuse to cooperate with the current Commission because they feel there is no political will.

Human rights violators in power also have a tendency of arrogating to themselves the right to be forgiven. It is the prerogative of victims to decide whether or not they want to forgive. After all, forgiveness and reconciliation only form part of transitional justice. As correctly noted by Jayakody, prosecution of perpetrators is an important part of transitional justice.

Since his ascension to power, Mnangagwa’s mantra has been “let bygones be bygones”. Without the participation of victims, Mnangagwa unilaterally granted Mugabe an amnesty. He has also extended an amnesty to certain economic crimes without consulting victims. Such an approach reeks of what is summarised in the Zimbabwean proverb: “chinokanganwa idemo asi muti haukanganwe”, which can be loosely translated as “it is easier for the axe to forget about the scars than it is for the tree that bears them”. Unlike the Government of Lesotho whose Defence Forces recently apologised for human rights violations, Mugabe refused to apologise for Gukurahundi. Mnangagwa has followed Mugabe’s footsteps by showing reluctance to apologise for Gukurahundi and denies that there was political violence in the 2008 elections. This has led some commentators to observe that while the President may say that “Zimbabwe is open for business”, it is certainly “closed for remorse”.

Transitional justice processes and victims in the diaspora

Many victims fled from Mugabe and his top leadership, including Mnangagwa. Some have been living in the diaspora for decades. Recently, victims living in South Africa protested about Gukurahundi when Mnangagwa visited South Africa to discuss business deals. This raises the fundamental question that has been ignored so far in Mnangagwa’s attempt on achieving transitional justice: are victims living in the diaspora catered for in these processes? The Act is silent on this salient issue.

Inevitably, some victims living in the diaspora are unwilling to return and participate in a process that is presided over by those who victimised them. Transitional justice processes in Zimbabwe may be ineffective unless steps are taken to also cater for victims in the diaspora because a national healing process must be all-inclusive.

Those who fled from ZANU PF’s reign of terror and sought political and economic refuge in foreign countries are as equal victims as those who are in Zimbabwe. When major events happen in Zimbabwe, such victims seek to reconnect with their home country. Nothing better symbolises participation of a person in the affairs of their own country than the exercise of the right to vote. Mnangagwa continues to deny millions of diasporans this right to vote. It is important for the GoZ to understand the relatedness of things in this regard. Hopefully, the Constitutional Court of Zimbabwe that reserved judgment on diaspora vote on 14 March 2018 will be able to see the bigger picture.

Institutions that are tasked with transitional justice process must realise the unique and yet precarious situation of diasporan victims. It should not be a case of “out of sight out of mind” when it comes to diasporan victims. As a recommendation, the GoZ should appoint Commissioners to be stationed in certain foreign states to service diasporan victims. As for the consideration that transitional justice processes may not succeed if those accused of human rights violations are still in power, some may ask whether the processes should be deferred until such time when they are no longer in power. Of course, the immediate response may as well be the legal cliché “justice delayed is justice denied”. However, as once observed by Whiting, in certain situations, justice delayed may as well be justice delivered. Unless the Mnangagwa administration has genuine political will to account for past misdeeds, it is unhelpful to carry out transitional justice processes that are just a sham. Genuine political will can be proven by publishing the earlier Commissions reports and divulging the whereabouts of victims of enforced disappearances, such as Itai Dzamara. Itai is a human rights activist who became a victim of enforced disappearance for his criticism of Mugabe.

It is understandable that victims want to hear the truth right away. The question, however, is whether they can get to know the truth under the current administration. A situation where human rights violators remain in power and seek to preside over transitional justice processes that are meant to redress the victim is like the case of a thief that pleads clemency for committing the crime but demands to keep the loot.The GoZ “fired the shots” and the citizens “caught the bullets”. At the moment, it is like the GoZ is attempting to stitch the “bullet wounds” without removing the bullets that are lodged in the citizens’ bodies. That is a flawed healing process.

Copy this HTML into your CMS
Press Ctrl-C to copy
Zimbabwe : Related articles 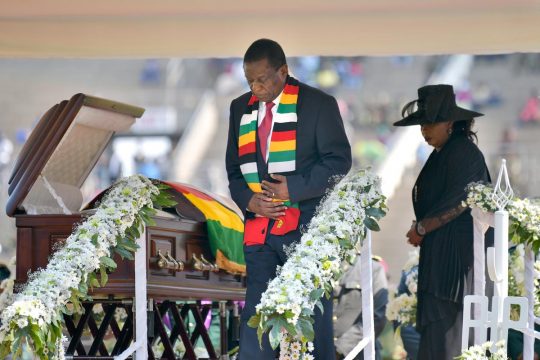 Zimbabwe: Mugabe is buried, not the past
Most read