– “We are looking for dissidents,” one of the soldiers thundered.

–  “We have not seen any dissidents in the area,” Sithole responded.

Thirty-six years ago Nhlanganiso Sithole sat outside a hut with his three brothers enjoying their favourite home-brewed beer, when a group of soldiers in army fatigue and red berets besieged their homestead in the Nkwalini area of Tsholotsho, West of Zimbabwe.

The soldiers were armed to the teeth and they menacingly announced that they were searching for so-called “dissidents”. It was February 5, 1983 and Sithole cannot forget that day. The dissidents who the soldiers – part of crack unit called the Fifth Brigade – were hunting down, were said to be deserters from the liberation movements, most notably the Zimbabwe People’s Revolutionary Army (ZIPRA).

The soldiers then pointed at one of the men who was shabbily dressed and had unkempt hair and declared: “This one is a dissident.” The man vehemently denied the accusation and told the soldiers that he had never been to the war. Among Sithole’s brothers, there was a former liberation fighter, who had gone to relieve himself in the bush when the soldiers besieged the homestead. When he emerged from the nearby bush the soldiers remarked, “That one is a dissident”, pointing in his direction.

“We will not hesitate to kill you”

Sithole leapt to his brother’s defence and told the soldiers none of them were dissidents. Sithole’s brother took his seat next to his sibblings and the soldiers continued with their intense interrogation. “We will not hesitate to kill all of you,” the soldiers shouted at the fear-stricken brothers.

And they did not.

Without any warning, the soldiers shot one of the men in the head. His lifeless body collapsed to the ground in front of Sithole and his brothers. Then the shooting continued. “I could not even react, I remained still as they shot dead all my brothers one after the other,” narrated Sithole. “Within a few seconds they shot at me and the bullet went through my left arm leaving a gaping hole.” Two more bullets were pumped into his right arm, shattering some of the bones. Sithole says he sprung to his feet, blood oozing from both his arms, ran towards the gun-toting soldiers and broke through the loose barrier they had formed.

He sought cover in one of the huts where a group of women were preparing a meal. The soldiers ran after him and fired more shots but they missed their target. Sithole took off, this time to the nearby bushes. They continued to fire indiscriminately in his direction but Sithole ran for dear life until he completely evaded his assailants. He sought shelter in the bush throughout the night and somehow survived despite losing a lot of blood.

Between early 1983 and late 1987, a series of massacres of Ndebele civilians carried out by the Zimbabwe National Army cost an estimated 20,000 lives in the Matabeleland and Midlands regions of Zimbabwe. The government called it the Gukurahundi offensive. Human rights groups and victims remember it as the most important massacres of independent Zimbabwe.

During former president Robert Mugabe’s era it was a taboo to openly talk about the atrocities, which he once described as a “moment of madness”. Mugabe died on September 6 in Singapore without acknowledging his role as the instigator of the killings. His successor Emmerson Mnangagwa, who replaced Mugabe following a palace coup in November 2017, was himself in charge of state security when the Gukurahundi was launched. In an interview with the state broadcaster on the eve of Zimbabwe’s 39th Independence Day celebrations, in April 2019, Mnangagwa said citizens were free to debate the killings.

“The question of Gukurahundi, personally I don’t see anything wrong in debating it on television and in newspapers,” president Mnangagwa said. “Actually, it’s critical that we have that debate and as a result of that conversation we have created a matrix of implementation of ideas to deal with issues that were raised. Some of the issues could have been resolved a long time back. In my view, there is not a single issue that cannot be discussed and a way forward crafted.”

However, Mnangagwa’s approach in addressing the Gukurahundi issue has been received with mixed feelings by people in the affected areas in Matabeleland and Midlands.

Under Mugabe, the state has also been complicit in political violence which was mainly targeted at members of the opposition political parties and others viewed as enemies of the state. Since the emergence of a strong opposition, the Movement for Democratic Change (MDC), the state has resorted to using force to crush any dissent. The state has also used force to quash protests by political parties, civil society organisations, trade unions and ordinary citizens who were dissatisfied with the situation in the country, especially the economic situation.

The 2013 Constitution established the National Peace and Reconciliation Commission (NPRC) and the supporting law was enacted in January 2018, soon after Mugabe was removed from power. The NPRC mandate is “to ensure post-conflict justice, healing and reconciliation, including developing programmes that promote national healing, unity and peaceful conflict resolution.” However, most of state actors who were in charge when the killings took place are currently in government, putting into question the sincerity of the authorities to deal with past crimes, especially those they may have been directly involved in. Like Mugabe, Mnangagwa also said “bygones should be bygones” instead of taking responsibility for his role in the repression and the crimes committed. This makes the mandate of the NPRC difficult to achieve. The commission receives resources from the Treasury. This gives the state the leeway to influence its operations. The President is also allowed to handpick members of the commission.

Since it was established the NPRC has embarked on a series of outreach programmes around the country giving an opportunity to victims of past conflicts, including the 1980s mass killings, to publicly speak out about their experiences. The truth telling process may afford the victims and possibly the perpetrators a platform to share their side of the story. The Zimbabwean government, however, has conveniently skipped some important steps – such as acknowledgement and truth-telling by individuals and institutions implicated, restaurative justice, reparations – and is now focusing on documentation and reburials, as in the case of Gukurahundi.

While Nhlanganiso Sithole was hiding in the bush, a young couple from the area who was desperately trying to leave by train to Bulawayo heard the gun shots and changed direction in order to evade the soldiers. Unfortunately, their new route led them directly to the soldiers, who killed them on the spot. The victims, identified as Justin Tshuma, who was aged 32, and his 21-year-old wife Thembi Ngwenya were buried in a shallow grave a few metres from the railway line where they were waylaid by the Fifth Brigade soldiers. On April 7,2019, the remains of the couple were exhumed for reburial by Ukuthula Trust, an expert organisation in the field of pathology. The event, conducted at the behest of the families, was a first in the district since the killings occurred. It was a sign that the lid on the unwritten ban on any open discussion on the 1980s massacres has been lifted.

But the partial approach from the government is unlikely to lead to a complete resolution of past crimes. Some parties may feel let down by the process and end up not participating. The Zimbabwean government still has a lot to do in order to bring about justice, truth, reconciliation and healing in many communities around the country who were affected by state violence.

Copy this HTML into your CMS
Press Ctrl-C to copy
Zimbabwe : Related articles 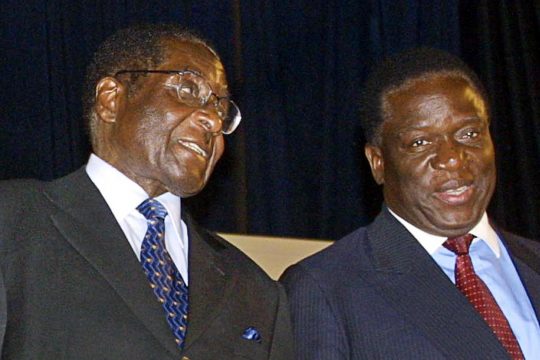 The possibility of transitional justice post-Mugabe in Zimbabwe
Most read