Dressed in a black suit over a light green shirt, Thomas Kwoyelo appeared composed throughout the hearing as he denied 32 counts out of the 93 counts of war crimes and crimes against humanity he is alleged to have committed during a conflict that has plagued Northern Uganda since the mid-1980s.

“I don’t know anything about that and I plead not guilty,” the former rebel of the Lord’s Resistance Army (LRA) calmly said through his local language interpreter as each of the 32 counts was read to him on the first day of his trial. Security in and around the courthouse was tight. Kwoyelo’s wife, Grace Auma, and another man who refused to be identified were the only relatives present in the courtroom. Other relatives and local residents followed the proceedings from a tent outside the court facility. The public gallery was largely occupied by officials from non-governmental organizations, media and state.

Kwoyelo appeared before a panel of three justices headed by Persis Jane Kiggundu. The registrar of the International Crimes Division of the High Court read out the preliminary information of the charges before reading each count individually. The prosecution alleges that Kwoyelo willfully commanded systematic inhumane attacks on civilians who were raped, kidnapped, murdered, enslaved, tortured and imprisoned. Many were also enlisted into the LRA ranks as fighters. He is accused of commanding attacks on civilians in Abera and Pagak villages, and Pabbo in Amuru district, where a large camp for internally displaced persons was attacked by LRA rebels who destroyed lives and properties between 1992 and 2005. Kwoyelo keenly followed through his Luo interpreter as his lawyers followed from the indictment. The accused entered a plea for each count, after one of the judges had asked him to confirm that he had understood the charges.

“I am happy that the trial has started today. I cannot comment any further. The government knows very well what they are doing with my husband,” Kwoyelo’s wife said after the hearing and as her other relatives gathered around her. “What we want is justice,” she added.

“Some are long dead and are not witnessing this trial”

Josephat Okello was a resident of Pagak, where Kwoyelo allegedly committed crimes. He was in Pagak when the war broke out, after he had retired from a Ugandan public service job. But when the conflict intensified Okello moved to the safety of Gulu town where he has been living since, doing petty trade.

He was present at Monday’s hearing and quickly recalled that it took ten years between the arrest of the accused and the opening of the trial. “This case had taken long and we were losing interest. We are happy it is taking off and people who were affected can finally look justice in the face,” Okello said. “We ask those handling this case not to delay it again, both sides need justice and it should be soon, otherwise it does not serve the purpose for the people who suffered during the Lords Resistance Army war. The case comes to conclusion when some are long dead, as indeed some have died, and are not witnessing this trial.”

The proceedings began late morning and were briefly adjourned after the defense objected that Kwoyelo could not enter a plea on one count due to incomplete disclosure by the prosecution. The elements of the charge related to abductions and holding hostages. Witnesses’ identities were protected and the lead prosecutor pleaded that restrictions of disclosure of evidence and particulars of witnesses and victims were dictated by the rules. The defense said it would be unfair for Kwoyelo to plead to something he does not understand. When the hearing resumed, their client pleaded not guilty. The reading of the charges will continue in the following days. 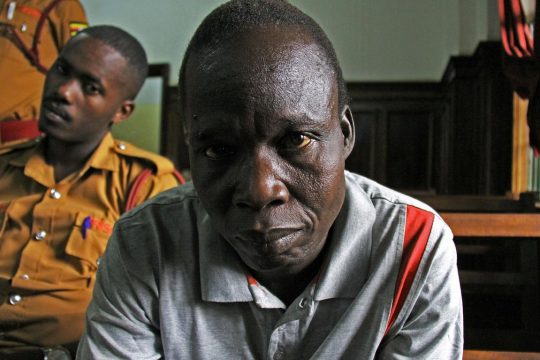