Two senior Khmer Rouge leaders were today found guilty of genocide in a historic ruling. Nuon Chea, the infamous regime’s “Brother Number Two,” and former head of state Khieu Samphan, who were already serving life sentences for crimes against humanity in their first trial at the Extraordinary Chambers in the courts of Cambodia, also known as the Khmer Rouge tribunal, were handed another life sentence.

Genocide against Vietnamese and Muslim Cham

With regards to the Cham, Nuon Chea was found guilty on the basis of superior responsibility despite judges being unable to establish genocidal intent. Khieu Samphan did not actively “assist or facilitate the execution of the genocidal policy against the Cham,” presiding Judge Nil Nonn said, reading from the court’s decision.

“Since the early stages of S-21’s operations, Nuon Chea knew and was involved in the arrest, detention, torture and killings of cadres targeted for purges,” Judge Nonn said, referring to Nuon Chea as Pol Pot’s “right hand man.”

“The Chamber finds that Nuon Chea was among those who decided who was arrested and sent to S-21. Nuon Chea ordered executions [of] large groups such as those arriving at S-21,” he said.

Although the atrocities committed by the Khmer Rouge – that led to the deaths of an estimated 1.7 million Cambodians – have long been referred to as genocide, this is the first time the UN-backed tribunal has found any former officials from the communist regime guilty of this crime. Despite widespread use of the term, Nuon Chea and Khieu Samphan could only be found guilty of genocide in respects to the Cham and ethnic Vietnamese. The UN’s Genocide Convention defines genocide as “acts committed with intent to destroy, in whole or in part, a national, ethnical, racial or religious group.” In the absence of such intent, crimes committed against ethnic Khmer by a regime that was itself Khmer fall under the umbrella of crimes against humanity. 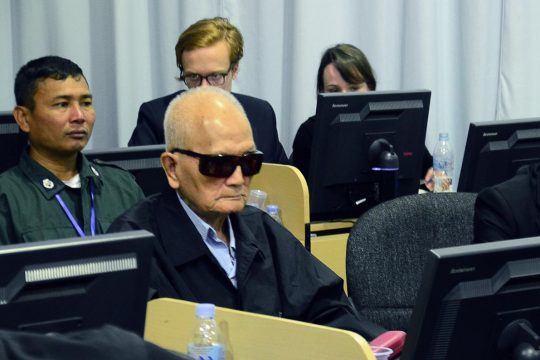 Cambodia: What will be left of the Khmer Rouge Tribunal?

During the mammoth trial, that consisted of 283 hearings and 185 testimonies, the court heard harrowing testimonies relating to massacres of both Cham and ethnic Vietnamese.

In one particularly gruesome account, Him Man, an ethnic Cham, explained the arrest and massacre of hundreds of his people at a pagoda in Kampong Cham in 1977. “I heard the screaming…‘Oh my Allah, please help me,’” Mr. Man told the court in 2015. “I believed that the screaming for Allah, for help, perhaps belonged to my mother and older brother.” He then escaped and spent the next eight days hiding near the pit his mother had been killed. “I was trying to…survive. Sometimes I could smell the stench – bad smells – and if the dead bodies were floating in the river and I could reach them, I may have eaten those dead bodies because of hunger,” he told the court.

A particularly important witness for the prosecution with regards to the ethnic Vietnamese was Seng Soeun, a former Khmer Rouge soldier who told the court that killings were ordered as part of an effort to “cleanse” the country of ethnic minorities.

The tribunal has come under widespread criticism for lengthy delays, government interference, and corruption. Prime Minister Hun Sen – himself a former Khmer Rouge commander – has long been outspoken against the prospect of further trials, claiming it could plunge the country back into civil war. While some argue the court has delivered long-awaited justice in a country where impunity of the powerful is rife, others have dismissed it as expensive waste of time due to convicting just three people in 12 years.

Craig Etcheson, a prominent researcher who served as chief of investigations in the Office of the Co-Prosecutors at the Khmer Rouge tribunal for six years, said he believed that the tribunal had succeeded in the face of many adversities. “I have been working on the Khmer Rouge Tribunal in one capacity or another for more than a quarter century, and in that time, I have had scores, possibly hundreds of people – soldiers, diplomats, bureaucrats, journalists and others – insist to me that it would never happen,” he said. “But we made it happen, and as a result, we have achieved a small measure of symbolic justice for the crimes of the Khmer Rouge regime, along with a solid historical narrative which speaks to the single most pressing question on the minds of every survivor: Why?”

However, Ou Virak, a survivor of the Khmer Rouge and founder of the Future Forum think tank, said he felt Cambodians had lost interest in the court a long time ago. “I think there’s no sense of real justice brought about with the verdict by the tribunal so far and I think that most of the Cambodian people are giving up on the hope for justice or even for closure,” he said.

Speaking outside the court, Man Sos, a 69-year-old ethnic Cham from Kampot, called the decision “acceptable” but said the ruling could not compensate for his losses at the hands of Pol Pot’s communist party. “I lost my village, my house, my rice farm and I lost my family,” he said. “I do feel some relief...but I want to feel something that compensates for all that we lost.”