JUSTICEINFO.NET: At what stage is the fight against sexual violence in the Democratic Republic of Congo?

DENIS MUKWEGE: This struggle will continue until there is an end to rape. Even if only one woman is raped, that is a reason to continue the fight. When a woman is raped, it is a denial of her humanity, and denying someone’s humanity is the worst humiliation they can suffer. If someone refuses to treat you as a man, woman or child with the same rights as him and thinks he can abuse your rights just because he has a gun, it’s a terrible humiliation.

What are you doing to try to end this humiliation?

When women arrive here at Panzi [name of the hospital in Bukavu, eastern DRC, where Dr. Mukwege treats women rape victims], they have physical injuries, infections. On top of that they are mentally wounded from the psychological attack on their humanity. So we look after them not only on the medical front. We consider that we also have an obligation to provide them with psychological care. And when our patients are well both physically and psychologically, we can then provide them with socio-economic support. Because the victims cannot live at the hospital, they must go back to their villages and communities, even if it was there that they not only suffered rape but looting, their houses were looted, destroyed. Returning to a village where you have practically nothing and where you were raped means you will likely suffer exclusion.

When these women are better physically, psychologically and economically, they start to demand justice.

So we try to give these women the capacity to be autonomous in their village, to be able to support themselves and their children, if they have them. And when these women are better physically, psychologically and economically, they start to ask: Why me? I know the person responsible for what happened to me. And that’s when they start to demand justice.

Hence the importance of the judicial and legal assistance that you provide here at Panzi?

Yes. We have a legal clinic with lawyers and jurists who not only help the victims to put a legal case together but also represent them in courts and tribunals so that justice can be done. You must understand that healing is a process, and if we neglect one of the pillars of the process, healing will not happen quickly. I have a whole medico-legal service at the hospital. Since I sign medical certificates, I have also had to testify. If necessary I will fight to the end for the rights of women.

Excerpts from our video interview with Dr. Denis Mukwege

In these excerpts, Dr. Denis Mukwege, speaks about the legal aspects of the reparations process for victims of war rapes in the DRC.

How do you see the work of the Congolese judicial authorities on stopping these crimes?

I think there is much to be done, if we are honest. Even if there are now sometimes convictions with compensation ordered, reparations are slow to come and I think that is part of our struggle today. It’s not enough to go to court, to have the crime recognized, it is also necessary to provide reparation for what has been destroyed. There is a big problem of impunity in this country. There are certain political leaders who were themselves heads of rebel groups. [Today] they are commanders, they have military or political responsibility.

It’s not enough to go to court, to have the crime recognized, it is also necessary to provide reparation for what has been destroyed. There is a big problem of impunity in this country.

I think that by mixing everything up [strategy in the DRC of integrating former rebels into the army, police or political institutions, without any processing], we are not going in a good direction. It’s as if rape had been integrated into the army, and today we are paying a very high price, because you cannot be both judge and party.  The fact that there has been no good vetting to establish responsibility and exclude all the people who committed war crimes, crimes against humanity or rape, I think we are paying dearly for that now. I regret this very much, because if those responsible are not made to apologize to the victims, they think their actions will have no consequences.

What difficulties do you see in access to justice?

The other big problem is that here at Panzi we have treated thousands of women who do not know who raped them. I think that today the justice system should make an effort to ensure that in the cases of these women who have been gang raped in specific places by sometimes well-known armed groups, the law of hierarchical responsibility is applied. Unfortunately, this principle of hierarchical responsibility is often not applied. And when the woman cannot formally identify the person who raped her, her complaint is often rejected, whereas these hierarchical leaders are sometimes known. But in order to make peace, they are integrated into the army, even though they have committed acts that could be categorized as war crimes or crimes against humanity.

Justice is sacrificed at the altar of peace, but in the end there is neither peace nor justice. This is what we see today in the Democratic Republic of Congo. How many people have been pardoned and then two or three years later return to the forest to do the same thing again! I think we need to change our approach. People must be held responsible and accountable for their actions and should at least be able to acknowledge to the population the wrongs they have done and ask forgiveness, so that we can move forward with reconciliation. But both transitional justice and traditional justice are lacking in the DRC. That is why we are in a war without end.

Do you think there needs to be a Truth and Reconciliation Commission?

Absolutely. I think that we cannot keep hoping to build lasting peace on top of mass graves. That will never happen. We have many families who have lost loved ones and are waiting for justice. We absolutely need to clean these mass graves, so that our dead can be buried with dignity and people can think about talking. But you cannot talk when your whole family are in a mass grave, buried with that shame. We cannot ask people to start talking to their torturers in this context.

We cannot keep hoping to build lasting peace on top of mass graves. That will never happen.

I think what we need is not only a work of remembrance but also and especially of truth, telling the truth of what we are living. I think many families want to know why me, why my family, my community? And it is only when people have the answer that they will start to talk about how it happened and how to ensure it does not happen again. But if you do not have the possibility to mourn your dead and bury them, neither can you start a process of forgiveness to bring you peace, because the person responsible for this murder remains a threat to you, even as a survivor.

We are facing a serious problem that requires us to work for sustainable peace, and such a peace cannot happen when people are cultivating hatred rather than love. And for love to grow, forgiveness and reconciliation are necessary. Otherwise we will remain in a hatred that is destroying the Congolese people. I think the solution is to speak the truth so as to move towards lasting peace. 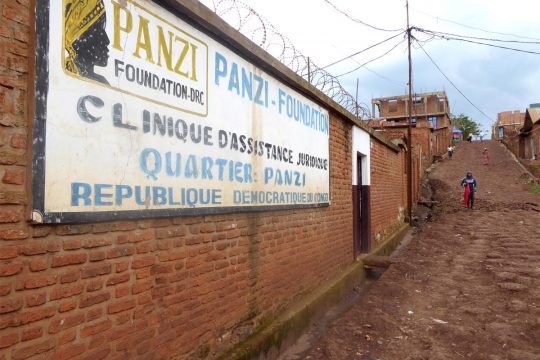 Documentary in the Congo of Doctor Justice
Share
Republish

Restitution of the 'Benin Bronzes': "All of the global North are implicated"