Before the July 22, 1994 coup, the conditions at Gambia’s notorious Mile 2 prison were far from good, but the military takeover would bring a special challenge: congestion.

Built in the outskirts of Banjul, the country’s capital, the prison’s cells for high-profile prisoners are 2 by 3 meters wide. They either have a plank of wood for a bed or a concrete floor. Built next to swamps, the building is mosquito-infested, according to its former inhabitants who have appeared before Gambia’s Truth, Reconciliation and Reparation Commission (TRRC) since it started its public hearings on January 7.

For Babucarr Jatta, the conditions in Mile 2 were quite simply not good enough “for an animal”. A slender man in his late forties, Jatta is a former prison medic, now commissioner of Janjanbureh prison, the country’s main detention centre lying 230 kilometers from Banjul. He appeared before the nine commissioners in his prison uniform, and sat facing the lead counsel Essa Faal and his team, occasionally peeking at an audience of about forty people to his right.

“Before the 1994 coup, any prisoner coming to Mile 2 must come with a warrant. You are either a convict or a lawful detainee undergoing trial,” explained Jatta. Following the coup, the rule was broken, as Mile 2 became home to dozens of top Gambian senior security officers and government officials. It did not take long before a fallout occurred among military leaders who accused some of their colleagues of attempted counter-coup. So detainees, mostly soldiers, were gradually dripping in. “We experienced overcrowding after the coup,” Jatta said. “Prisoners were brought to Mile 2 without a warrant or any document. Normally what they told us was: ‘it is an executive order’.” Soldiers would tell Jatta that they were “investigating”, and so prisoners “should not have access to their lawyers or family members”.

Babucarr Jatta was of special significance to these prisoners. According to him, the military made it clear that detainees could not be taken to hospital nor any doctor be brought to see them. Yet most were brought with “multiple wounds and bruises” and needed medical attention. That made Jatta a special person for anyone with such needs.

Jatta, in fact, was never trained to handle complicated medical issues. He said he was trained at the Polyclinic, a hospital in Banjul, on first aid: mostly dressing of wounds and administering of painkillers. “I can read blood pressure and also recognize some vital signs,” he added. But despite the inadequacies in skills, equipment and medicine at the prison, Jatta was the go-to guy. “This is not normal but who was there to refuse the executive order?” the medic told the TRRC.

Fighting back the trauma of mock executions

Testimonies before the Truth Commission are often tense with an occasional flare of emotions as victims narrate their ordeal. One moment, however, that most of them remember with the flicker of a smile is an encounter with Babucarr Jatta.

Ebrima Chongan, a former police operations commander who was arrested and jailed at Mile 2 for two and a half years, and the first witness before the Commission, remembers him as a “good man”. Also fondly remembering Jatta was Mamat Cham, a former army captain, now commander of the Gambian army, who was also detained at Mile 2 after the 1994 coup.

Jatta recalled how he treated both Cham and Chongan a day after they were reportedly subjected to mock execution and tortured. “Ebrima Chongan sustained multiple injuries on his head and back. Mamat Cham had the same injuries and excessive bleeding from his nose,” the medic testified.

According to information before the Commission, following that mock execution, Ebrima Chongan, Mamat Cham and one R.S.M Jeng, were taken to a separate prison. At that time their colleagues had already seen them being kicked and dragged and then heard volleys of gunfire. They had concluded that they had been killed.

That’s when soldiers came for the rest of the detainees and told them: “We are coming for you next.” That’s how Babucarr Jatta got himself an additional role: trauma counsellor. He knew the prisoners had not been killed because he had treated them. He took a risk, went to their prison, opened the door and brought them out for their colleagues, who were told to stand at the gate of their cells, to see them. This, according to the medic, helped the prisoners, some of whom he had earlier described as “mentally unstable” as a result of mock executions.

Memories of the morning shift

At Mile 2, the Security Wing has four classifications. Confinement is considered the worst. The Wing is partitioned from the Main Yard by a thick concrete wall of about 4 meters tall with a black metal door. Jatta said when he started his morning services, giving medicine to prisoners, people in the Main Yard would tell him to help them first because if he got into the Security Wing, it would take a lot of time for him to come out. “Even prisoners in the Main Yard would tell me: you have work to do there [at the Security Wing] because we heard some noise. They said they heard shouting and gunfire,” the witness said, suggesting torture.

Babucarr Jatta’s role as a medic at the time was a difficult task. Reliving those memories before the Commission proved to be no less so. But as Jatta himself said, he did it “for God’s sake” and at that time, “no one knew if you will be the one to be arrested next.”

“I could be in their position too,” he concluded, referring to the detainees.

VISIT TO THE NOTORIOUS MILE 2 PRISON

On November 18, Gambia’s Truth Commission investigating human rights violations under the regime of former dictator Yahya Jammeh, undertook a visit of the Security Wing of Mile 2, the small nation’s most notorious prison, often euphemized by Jammeh as “my hotel”.

The Security Wing was where several senior security officers and prominent former government employees, including ministers, were jailed and tortured following the 1994 military takeover. The area is partitioned from the State Central Prison’s Main Yard by a thick wall of about 4 meters tall with a thick black metal door. Several witnesses of TRRC have explained the fear that grips them any time they hear the noise of that door being opened. For them, the sound meant that they were either going to be tortured or taken away and killed.

“We have come here because it is important for us to understand what the witnesses are telling us,” said Lamin Sise, chairman of the Truth Commission, as he discussed with Ansumana Manneh, the director general of Mile 2. Part of the mandate of the commission is to recommend institutional reforms, said Sise, as he explained the rationale of their visit.

This was the first site visit for the TRRC. In the previous two weeks, the Commission had heard harrowing stories of witnesses who reportedly went through torture, mock execution and, in some cases, death in Mile 2, about 4 kilometers from Banjul, Gambia’s capital city.

The Security Wing currently holds 70 inmates. It is still next to what several witnesses described as a mosquito-infested swamp. Security Wing Number 1 is a 12-room cell built by the colonialists. Each room is about 3 by 2 meters, where people are kept in solitary confinement. This is where Commission witnesses such as the country’s former deputy police chief Ebrima Chongan, former captain Sheriff Gomez and current commander of the Gambian army Brigadier General Mamot Cham were detained. 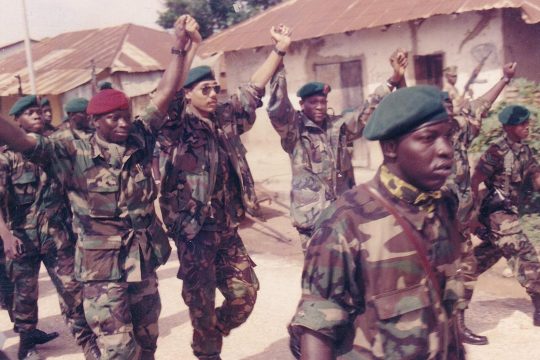