JUSTICEINFO.NET: The Truth and Dignity Commission (IVD) closed its doors on December 31, 2018. Do you think the transitional justice process is finished?

MOKHTAR TIFRI: The process should not be closed on December 31, 2018 nor on May 31, the deadline the Commission has set itself for the liquidation of its assets. The process, by law, must continue. Today, it is the post-IVD work that must begin: implementation of the resolutions and recommendations of the IVD final report. Unfortunately, this report has not yet been published. The law also provides for the formation of another committee, appointed and set up by the Assembly of People's Representatives (ARP), which would take charge of the Commission’s recommendations. However, we are not even talking about this project. Hence the belief of a number of people, including myself, that transitional justice is already dead and buried.

What remains to be done in your opinion?

In fact, many cases are opening today, firstly those of victims. The IVD is in the process of issuing reparation certificates to survivors of repression, but there remains the great work of reconciliation, to which many victims aspire. The reform of the administration has not yet begun. How can we ensure that mistakes, practices and crimes committed in the past are not repeated? What about the truth on what has been happening in our country for decades? A small part has been revealed, but what about the rest? How can we also transmit the truth to the new generations?

Another important aspect concerns the specialized chambers for transitional justice, where judgments are very slow.

Transitional justice also concerns the regions. How do we deal with regions that have been marginalized for decades and will surely be mentioned in the final report? And what about the IVD archives, what do we do with them? They will probably be entrusted to the National Archives, but for what kind of use? Will they end up being locked in drawers? How can we ensure that they do not fall into hostile or harmful hands? They contain important information about people's private lives.

The Commission has a highly developed information technology system. What are we going to do with it? I have asked that this important heritage be transferred to other independent bodies, such as the National Authority for the Prevention of Torture (INPT) or the Human Rights body, which was legislated by the ARP and will, I hope, soon be established. We would have liked the State to take the lead in facilitating this process. However, the government filed a complaint against the IVD with the Administrative Court to annul the IVD's decision to carry out the liquidation of its assets itself. [The Administrative Court ruled in favour of the IVD.]

The head of the government has still not set a date for IVD President Sihem Bensedrine to submit the Commission’s final report to him. How do you interpret this delay?

I think the conflict is essentially political. At the top, people do not believe in and have never believed in the transitional justice process. The paradox that has arisen in our country is that the law on transitional justice - which is poorly drafted and has many shortcomings from which we are still suffering today - was drafted mainly by the supposed victims, the people of Ennahdha [Islamist party] at the time of the Troika and the Constituent Assembly. Except that things changed after the 2014 elections. It is the alleged torturers who are now applying this law! The former wrote a very advantageous law for the victims, and the latter, seeing this as contrary to the interests of people close to the former regime -- many of whom are currently in power -- are trying to block and hinder the process. 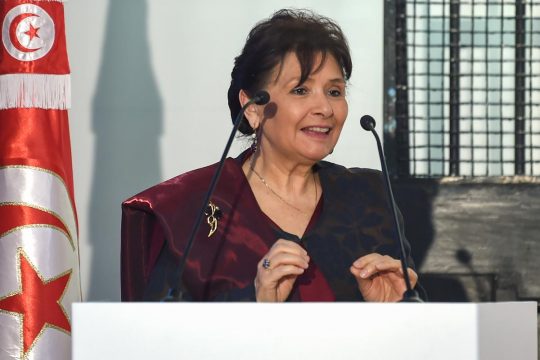 We remember the historic plenary session of Parliament on March 26, 2018, when MPs of the majority party vetoed the continuation of the IVD's work. Since then, the government has not forcibly suspended the functioning of the IVD but has stopped dealing with it. Hence all the questions raised by the current situation: will the head of government receive Ms. Bensedrine and her board members for the submission of the final report? Will this report be published in the official gazette or will it suffer the same fate as the list of martyrs and wounded of the Revolution, which was nevertheless transferred to the government by the High Committee on Human Rights and Public Freedoms in December 2017?

Also, the president of Parliament is caught between his duty to receive the head of the IVD and pressure against it from parliamentarians, because of the veto of 26 March.

The head of government must publish the report. Decisions must be taken to implement the recommendations of the Truth Commission.

During the trials of the specialized chambers, we noticed your presence in the cases of both Islamist and left-wing victims. You are one of the few lawyers who do not distinguish between their political leanings...

Yes, but I don’t think that is so remarkable. Firstly, I am appearing before the specialized chambers on behalf of OMCT and for the benefit of the families of several victims. Secondly, at all times, including before the Revolution, I have never made a distinction between victims, whatever their political tendency. All victims have been subjected to abuses and their basic human rights have been violated. It is my role as a human rights defender to be committed to ensuring that justice is done for them. Otherwise who would do it?

The specialized chambers started operating in May 2018. Here too, we are moving very slowly. Why do you think that is?

There are many problems with the specialized chambers. First, article 8 of the Transitional Justice Act, which establishes specialized chambers, is really poorly worded in that it provides for the establishment of specialized chambers for transitional justice with magistrates appointed by decree. However, there is no provision to enable a sufficient number of judges. The High Council of the Judiciary has not assigned enough judges to be trained in the field of transitional justice. As we have seen recently in Nabeul, at the trial of Fayçal Baraket, but also in Kef, Tunis, Gafsa and elsewhere, whenever a single judge is absent, the Chamber cannot rule. Secondly, no code or special procedures manual has been drafted for the specialized chambers. We do not know if there will be judgments in absentia. We don't know how to file objections. Is it common law that will be applied? And to what kind of Chamber should appeals be lodged? I presume ordinary courts of appeal, since there is no other choice. The law says nothing on this and only provides for specialized chambers at the trial level.

There has been a lot of talk recently about abolishing this Article [8] and cancelling the specialized chambers. There are also rumours of an amnesty after the judgments have been pronounced. This would be a blatant attack on justice and a flagrant contradiction with the philosophy of transitional justice, which gives primacy to victims. The State would be taking sides with the torturers. It would also signal the failure of all attempts to shed light on what really happened here, burying the process of writing history and any institutional reform project. And then it would be a huge disappointment for the victims, most of whom ask only for an acknowledgement of the facts by the accused and an apology! The State cannot override this whole process by declaring an amnesty!

We have not seen many accused attending the hearings of the specialized chambers. Does that mean they have State support, leading them to be absent from the courts?

The defendants must appear before the courts. We have noted a call for rebellion by some police unions, asking defendants not to respond to the summons to appear before the courts. This is very serious, especially since these acts of rebellion reflect total impunity. Some specialized chambers, such as the one in Tunis for the trial of Rached Jaidane, have issued a summons to defendants under pressure from lawyers representing civil parties. It remains to be seen in the coming days whether or not this judicial order will be enforced by the judicial police. Do we want to encourage people to use other means to take justice into their own hands? Or to move justice elsewhere by resorting to international bodies, such as the African Court of Human Rights or the United Nations?

Do you think sentences will be handed down against torturers and the people who issued the orders?

I think we'll get there one day. The specialized chambers are currently deciding on about 100 cases investigated and transferred by the IVD. Sentences will certainly be handed down in these cases. Will they be applied? I don't know. Because in the current context, the possible cancellation of Article 8 and the threat of amnesty still weigh on the Tunisian process. And even if the judicial process continues, it promises to be long, as in other countries in transition.