“Justice remains constitutionally and fundamentally the last resort for the Central African citizen,” said Firmin Ngrebada in his general policy statement to the National Assembly on 29 April. The Prime Minister of the Central African Republic was referring amongst other mechanisms to the establishment of a Truth, Justice, Reparation and Reconciliation Commission, whose mandate is “to develop a reparation system in order to achieve a cessation of hostilities and a definitive end to the multi-faceted violence in our country”.

Included in the recommendations of the Bangui national Forum in May 2015 and in the Khartoum Peace Agreement on 6 February 2019, this transitional justice tool should help overcome the weakness of the judicial system and the unequal balance of power between the State and the armed groups. “It is an honest compromise, given that armed groups are too powerful at the moment to opt first for justice and then for peace. This is the price to pay to restore peace,” explained in March a source who has worked in several international tribunals and is now a civil servant in Bangui.

The shape of this future commission is still very unclear. “This type of justice is based above all on perpetrators’ confessions, so as to reconcile communities,” reflects Dominique Saïd Paguindji, president of the State Council, who is working on the issue. “The Truth Commission will deal with minor offences, such as putting up illegal roadblocks, racketeering, petty theft with no aggravating circumstances,” he says. If a case were referred to the courts, the commission could, he thinks, organize “remission of sentences if there is no lying [by the accused] or if the offence is not classified as a war crime or an international crime.”

So, is it a truth commission or a court? Lawyer Mathias Morouba seems to see more in line with what such a commission traditionally involves. “It will work on the same principle as the talking tree between community leaders,” says the president of the Central African Human Rights Observatory (OCDH), for whom “the fight against impunity is also about finding alternatives to ordinary justice”.

All remains to be done

Obviously, while everyone agrees a Truth Commission could be useful in the Central African Republic, not everyone sees it the same way. Above all, it has still not been set up. According to the Khartoum peace agreement, it was to be set up within 90 days. “The Commission has fallen behind because of the cabinet reshuffle,” explains Sylvain Demangho of the Ministry for Humanitarian Action and National Reconciliation, the ministry responsible for creating the Commission with the support of international donors (European Union, UN, etc.).

The announcement in early March of a new government, provided for in the peace agreement, triggered a wave of protests from armed groups that control much of the country. They asked for more ministries for their representatives. A new ministerial reshuffle finally satisfied them. Officially, the setting up of the Commission has been a victim of these priorities. 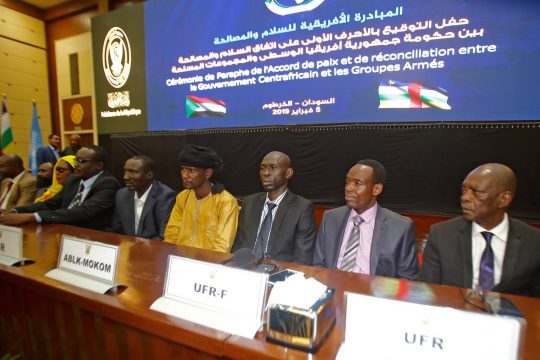 CAR: "A peace for the benefit of the government, not for the sake of justice"

The search for information and documentation, the first step in the creation of the Commission, would have begun, but the roadmap is still long. There have been seminars between the State authorities, broad popular consultation to gather the people’s views to help draft a law that will then be submitted to Parliament, but three months after the peace agreement it seems the reality is that everything still remains to be done. The members of the “inclusive commission” provided for in the peace agreement, which must include representatives of the government and armed groups, have still not been appointed. Yet this commission must work before the creation of the Truth Commission “to identify and propose any action that may be taken in the field of justice”, according to the Khartoum agreement.

“It will take 90 days from the Prime Minister’s general policy speech,” says Sylvain Demangho. So from April 29th. He then estimated that the Truth Commission could be created “by the first half of June”.

“We have lost time and we see that the government is under pressure from the African Union and armed groups to implement the [peace] agreement via individual demands, such as personal appointments. The Truth Commission is the main thing that has suffered from this situation,” said a diplomatic source, who also criticized the inaction of the Ministry of Humanitarian Action. “It is paradoxical, because there is a strong political will at the Presidency level to create a Truth Commission. But there is a blockage at the ministerial level. For the minister, the priority seems to be to create a monument to the victims,” the diplomat said. “The question is how to conduct the popular consultation process in an accelerated manner,” explains the same diplomat. “We will have to speed up consultations to meet deadlines.”

Some observers now fear that these delays will harm the Commission itself. In a report entitled “Justice and priority for victims” published in October 2018, the Pharos Observatory, a platform for reflection and action on the pluralism of cultures and religions, noted that “a TRC unable to meet the expectations of victims is undoubtedly more dangerous than the absence of a TRC. It could indeed annihilate the last bit of citizens' trust in justice, with the risk of opening a new cycle of revenge, or even permanently compromising their trust in the State.”