Ensuring justice for human rights violations that occurred over many years can be a long and tedious process. In Gambia as in other countries, it can also be an expensive project. Gambia has endured 22 years of brutality under dictator Yahya Jammeh before he was forced to leave the country in January 2017. Jammeh now lives in exile in Equatorial Guinea. But he and a number of those who ruled the country with him are being investigated, notably by Gambia’s Truth, Reconciliation and Reparations Commission (TRRC).

For a country of 2 million people, half of them living below the poverty line, the much needed justice is also coming at a cost. This reality is not lost on the country’s Justice Minister Abubacarr Tambadou. “Transitional justice around the world is a very expensive exercise,” he said in an interview.

Gambia’s new government that took over from the former dictator inherited an almost bankrupt economy with an unsustainable public debt. With little funding available, several transitional justice programs such as reforming the army, creating a new Constitution, investigating economic malpractices of the former regime, among others, have nevertheless kicked off. A few months after the democratic change, the United Nations Peacebuilding Fund gave a total of US$10.1 million to Gambia for the years of 2017 and 2018. It has renewed its support with US$13 million in 2019-2020.

In 2017 US$3.1 million of these funds were approved to support transitional justice, security sector reform and policy coordination at the presidency. Tambadou said that the support from the UN to the country’s transitional justice is by far the largest. “They [UN Peacebuilding Support] have provided tremendous personnel and financial support to this process,” he said.

Also, at the Gambia’s rescue was Qatar, a gulf country with no known record for championing human rights in the world. Qatar, according to Tambadou, provided US$3 million to Gambia’s transitional justice programs. According to the Minister of Justice, Gambia’s neighbor Senegal also pledged about US$1 million to support the TRRC. (Despite efforts to reach the embassies of Qatar and Senegal in Gambia they were not readily available for comment.)

According to the finance director of the TRRC, Alieu Awe, the Commission’s 2019 annual budget is over 140 million dalasi (US$2,8 million). This figure, according to Awe, “covers recurring and non-recurring expenditures with outreach activities included”.

No money for reparations

In 2017, on the recommendation of the TRRC, Gambia’s government established a medical board to examine student protesters who were shot by soldiers in April 2000. Also part of this group were opposition activists who were arrested and reportedly tortured in April 2016 and are suffering health complications.

Unlike other Truth Commissions, Gambia’s TRRC can grant reparations without consulting anyone. The Commission has a committee among its 11 commissioners who can grant them. Since the start of the TRRC’s public hearings on January 7 up until the end of its fourth session on April 25, the Commission has heard 57 witnesses. “The more the process unfolds, the more victims there are and the more there will be need for interim reparations in many different forms,” said Justice Minister Tambadou.

There will also be monetary reparations. We have assurances from the Gambia government that funds for this will be made available. And we are also starting an initiative to raise funds from other sources to ensure that reparations are paid to victims as mandated by the TRRC Act.

However, according to the executive secretary of the TRRC, Baba Galleh Jallow, the Commission currently does not have money for financial reparations, even though he assures that such compensation will be paid to the victims. “There will also be monetary reparations. We have assurances from the Gambia government that funds for this will be made available. And we are also starting an initiative to raise funds from other sources to ensure that reparations are paid to victims as mandated by the TRRC Act,” said Jallow.

The cost of special witnesses

Reparations is not the only funding challenge of the TRRC. According to the Justice Minister, the testimony of Sanna Sabally, for instance, presented one such challenge. Sabally is a former vice-chairman of the Armed Forces Provisional Ruling Council, a group of soldiers who did the July 22, 1994, coup that brought Jammeh to power. Sabally testified before the TRRC in April. “When Sanna Sabally was supposed to testify, [you had] the logistical arrangements, the security and transportation to get him from Dakar to Banjul, his accommodation in a secured safe house which needed to be guarded, the food for the security and others. It is a huge logistical requirement when you have witnesses like Sanna,” said Tambadou. “The funds were not readily available at the TRRC and we had to find the funds. Now we need to find the funds to refund the TRRC and the Gambia Police Force.” 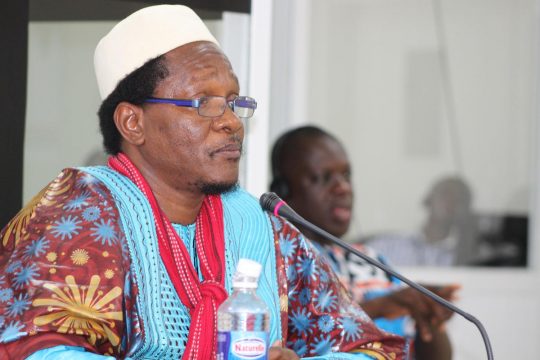 By many standards Gambia’s TRRC is becoming a success story in terms of sustaining public interest. It is the most popular show on television, radio and online in Gambia. The Commission made an early breakthrough by bringing perpetrators to confess and apologize for their crimes. So far, the appearance of Sanna Sabally was arguably the highlight in the process.

On May 31, a delegation from the UN Peacebuilding Support met Gambian journalists at the end of their visit to the country. The team had come to monitor the implementation of Gambia’s transitional justice programs. “I have to tell you that all of us are very impressed with the level of explanation we received both from the public institutions and civil society,” said Ambassador Gert Rosenthal, a national of Guatemala who is member of the Peacebuilding Support advisory group.