He didn’t get a chance to meet with Colombian government’s leaders. Even though President Iván Duque excused himself because he was unveiling a major tunnel outside Bogota and his Vice President Marta Lucía Ramírez also pointed to a busy schedule, the anecdote seems to underscore a reality: sexual violence has become the latest punching bag in the political tussle over the 2016 peace agreement with the former Revolutionary Armed Forces of Colombia (FARC).

As in many countries, sexual violence has been one of the most invisible atrocities in Colombia. There are signs of growing public awareness now. While 8,8 million persons – a fifth of the total population – have been officially recognized as victims of conflict, only 28,641 have come forward to denounce sexual violence, according to the national Victims Register. Five years ago, however, when discussions on transitional justice began during the Havana peace talks with FARC, only 5,997 victims of sexual violence were registered. This means that the number of persons reporting such cases jumped fivefold, while the total amount of victims grew by 25%.

“We’ve risen from the ashes. We have been raising our voices and we’re now working together to gain recognition from society and to enforce our rights,” says Yolanda Perea, a lively 35-year-old Afro-Colombian with braids coloured in the pattern of the national flag. Like many rural women, she was abused by a FARC combatant when she was an 11-year-old in the town of Riosucio (Chocó province). A few months later, her mother was murdered after protesting over her daughter’s assault.

In spite of the suffering, victims have become more vocal and empowered. At least 10 of the 124 reports presented by organizations and persons to the Special Jurisdiction for Peace – or JEP, as it is locally known – focus on sexual violence. Just one of them, which Perea helped compile, lists 2,000 episodes.

Many new cases are coming to light, not just concerning FARC. Vera Grabe, a former senator and vice-presidential candidate who once belonged to the M-19 guerrilla that signed a peace accord in 1990, revealed in a letter to the Truth Commission two months ago that she was sexually assaulted by military officers during her detention in the early 1980s. The JEP also reports having received testimonies from victims who are not registered and have not even told their families.

Another result of this newfound visibility is the haunting public memorial dedicated to victims of the conflict and unveiled late last year in Bogota. It was conceived by renowned Colombian artist Doris Salcedo, in collaboration with 20 survivors of sexual abuse who chiselled tons of scrap metal that once were the weapons laid down by FARC into a corrugated floor.

Critical voices of the peace deal have also gained a more prominent presence in media. One is the White Rose Corporation, or Rosa Blanca, a group of 50 previously anonymous former female FARC combatants who were sexually abused by their superiors and now demand harsh sentences.

After electing former senator Iván Duque as president in 2018, his Democratic Center party

is bidding to continue its campaign success on the back of its opposition to the peace accord with FARC. It’s now relying on a wedge issue it only began using after the deal was signed.

The interest of his party on sexual violence began in 2017, when its lawmakers supported an amendment to the transitional justice system in a law governing the operation of the JEP. This proposition sought to make it obligatory for the peace tribunal to enforce ordinary penalties for sexual violence.

The Constitutional Court struck it down, arguing that the idea’s spirit might be praiseworthy but caused large legal problems and made it more difficult for victims’ rights to be satisfied. “The possibility of imposing sanctions from the ordinary penal code and prohibiting a special criminal treatment for this crime implies a grave break of procedure for a transition, because it eliminates all incentives to contribute with the truth and creates disparities among victims of serious crimes,” the country’s top court stated.

Once Duque was President, his governing party led a legislative initiative that sought to exclude sexual violence against children from the JEP altogether. The bill, led by a lawmaker whose military father is asking the JEP to review his conviction over a massacre, failed to gain the support of other parties in a Congress where the Democratic Center does not hold a majority.

After this defeat, Duque’s government submitted two constitutional amendments that no longer aim to modify the peace accord but would create new legal standards going forward.

A first project barring sexual violence – as well as drug trafficking and kidnapping – from ever being considered as politically motivated, and therefore making it impossible for any person responsible of them to receive an amnesty or a pardon in the context of a peace negotiation, was already approved in Congress. The peace agreement, however, had already banned sexual violence from being considered as a politically motivated crime.

Another project seeks to ban cases of sexual violence against children from ever falling under the jurisdiction of any transitional justice system or receiving alternative sanctions. Backed by several parties that had blocked Duque’s previous proposed amendments, this bill already cleared half of the debates and stands a good chance of being approved.

Neither of them applies retroactively, meaning they don’t really allow Duque to fulfil his electorate’s expectations of amending the peace deal and being tough on crime. With local elections of mayors and governors slated for October, the President and his party are now supporting a constitutional amendment that would introduce life sentences for sexual violence against children. It has few chances of succeeding given that Colombia’s Constitution bans life sentences, which probably explains why this week Duque began publicly contemplating a second option of lifting the statute of limitations for this crime.

These were concerns Duque and the Democratic Center never raised during the peace talks. After the failed plebiscite in October 2016 and ensuing renegotiation with opponents of the deal, a second and definitive peace accord included many of the significant changes and clarifications they put forward. Neither Duque, who was one of those renegotiating the peace deal on behalf of the ‘No’ camp, nor his party proposed any modifications regarding sexual violence whatsoever.

As public outrage is mounting over sexual violence, one of their key messages now is that the JEP will not be able to deliver justice to victims of a crime that has quickly become almost as emblematic as kidnapping, which was for years FARC’s most infamous practice. 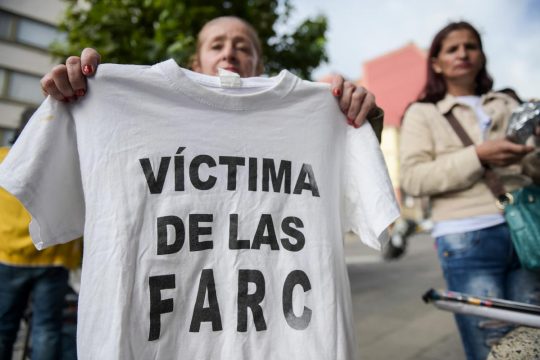