It seems topsy turvy. How and why was Colonel Abdoulaye Alkali-Saïd, described by Prosecutor Eric Didier Tambo as the “number 2 of the MPC” (one of the groups of the former Seleka rebellion behind the March 2013 coup d’état), tried before an ordinary court for the most serious crimes, while two courts – the International Criminal Court (ICC) and the Special Criminal Court (SCC) – are theoretically competent and have the means to prosecute this type of case on Central African territory?

In order to understand, let us return to a room in Bangui’s Galaxy complex on Friday, September 20, where the ICC’s “confirmation of charges” hearing against two former Anti-Balaka leaders was being broadcast almost a year after their arrest. In the red armchairs of the projection room are some one hundred members of civil society, including human rights NGOs, victims’ associations and journalists. All are waiting to see international justice at work in practice. But for many, it is not good enough because there are no former Seleka in the dock.

“I am very pleased to see Alfred Yékatom [also known as Rhombot] and Patrice-Edouard Ngaïssona being held to account by international justice for their actions,” explains Jean de Dieu Denamna of the Victims’ Coordination. “Like all Central Africans, I would like to see all the perpetrators tried for the crimes they have committed. The other side, the Seleka, must also be brought to justice.” In The Hague, the defence is also highlighting this sense of double standards, reinforced by the fact that the criminal sessions organized in 2018 in Bangui also judged Anti-Balaka.

“We are also catching fish”

So was the case of Alkali-Saïd placed on the list of the criminal session in order to restore the balance? “It is the fight against impunity,” Prosecutor Eric Didier Tambo told RFI after the trial against Alkali-Saïd. “If the ICC has been able to catch some big fish, we are catching other fish.” And is this to the detriment of the SCC, the mixed tribunal created by a 2015 law and supposed to try the smaller fry who were perpetrators of international crimes? Théophile Momokoama, its spokesman, points out: “The law creating the SCC does not provide for these crimes to be removed from the ordinary courts”. SCC officials regularly raise these cases with the judicial authorities, he adds.

“There are bridges for discussions between the SCC and the ordinary courts,” says Momokoama, “and this is what led to a dismissal at the SCC’s request of the Paoua case, for example [two massacres and an attack committed on 25 May 2019 which left 46 people dead and is attributed to the 3R group of Sidiki Abass, another movement from the former Seleka]”. But he admits: “A formal framework for a clear exchange on the different roles of the courts has not yet been established.” The spokesman did not wish to comment on whether such discussions took place in the case of Alkali-Saïd.

The slowness of the SCC

Asked about the SCC’s failure to launch any arrest warrants since its inaugural hearing almost a year ago, people at the court evoke the long time needed in a country largely controlled by armed groups to conduct serious investigations. The same long time that we find in The Hague, where the ICC has pronounced only one judgment – the acquittal of Jean-Pierre Bemba – twelve years after the opening of its first investigations in the Central African Republic.

The contrast between the ICC hearing and the Bangui criminal session is striking. “The case was opened on 16 September,” said Alkali-Saïd’s lawyer, Célestin Nzala. He regretted that he had only one week to examine a case containing ten charges, including two international crimes. After two visits to his client, the trial took place, and ended within a few hours. After verbal sparring between Prosecutor Tambo and Nzala and closing arguments, the verdict fell at the end of the day. Alkali-Saïd was sentenced to six years in prison.

He was cleared of charges of war crimes and crimes against humanity. The defendant’s lawyer pointed to the flaws of an “empty” prosecution file and the absence of a real prosecution investigation in the field, since Kaga-Bandoro, where the crimes allegedly took place, is still partly under the control of the MPC. In the absence of evidence, his client benefitted from reasonable doubt on those crimes. In the end, he was convicted only for criminal association. According to Nzala, his client’s case before the Bangui criminal court was for a “political reason”. “My client was arrested under farcical conditions,” he says. “This was a message that the prosecution wanted to send to armed groups, but the target was not well chosen. Alkali-Saïd is not a major figure in the hierarchy of these armed groups.”

This is not the first time that an ordinary court has tried former members of armed groups. In January 2018, Rodrigue Ngaïbona, better known as Andjilo, a former Anti-Balaka leader from Bangui, was sentenced by the Bangui Court of Appeal to life imprisonment for crimes committed in 2013. He became the first person to be convicted of crimes related to the conflict that opposed Seleka and Anti-Balaka fighters. The crimes had been committed in Bangui, they were well documented, and no charges were brought for international crimes. But already, the regular courts had given the impression they were taking a potential client from the SCC. 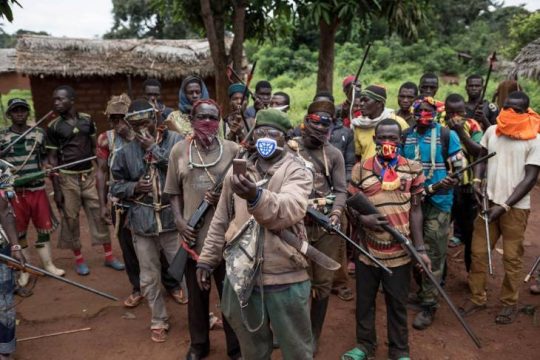 And Central Africans approve. Between late 2017 and late 2018, the level of trust in the formal justice system increased from 22 per cent to 50 per cent, according to a series of surveys conducted by Harvard University on behalf of MINUSCA and UNDP. This can hardly be attributed to the ICC, which in that period delivered a terrible blow to victims in the Bemba case, or the SCC which had not yet taken any action. The only explanation given by the pollsters was the resumption of national judicial activities and the wide broadcasting of criminal sessions. There have been seven since November 2017, including three in Bouar and four in Bangui.

Meanwhile, yesterday in The Hague, the ICC adjourned the conclusions of the confirmation hearing on the charges of Yekatom and Ngaïssona to postpone it to 11 October. The long time of justice, ever.