In September, the President of Liberia made two notable remarks concerning a special court to try perpetrators of serious crimes during the country’s civil wars that raged from 1989 to 1996 and again from 1999 to 2003. Such a court was recommended by Liberia’s Truth and Reconciliation Commission in its report published in July 2009, after hearing more than 20,000 witnesses. The court was envisaged at that time on the model of the Special Court for Sierra Leone.

Ten years on, this recommendation remains a dead letter and no trials have been held in Liberia. People named by the Truth Commission as heavily suspected of involvement in war crimes and crimes against humanity remain in high office. These include Senator Prince Johnson and his colleague Sando Johnson, who was considered to be "the confidant" of former dictator Charles Taylor, as well as his son-in-law Edwin Snowe, MP. Prince Johnson is one of the former warlords against whom the Truth Commission expressly advocated prosecution.

Faced with unprecedented pressure from Liberian and foreign activists pushing for the creation of this tribunal, President Weah asked Parliament, in a letter dated 12 September, "to provide advice and guidance on all legislative and non-legislative measures necessary for the implementation of the report” of the Commission, “including the establishment of the Economic Crimes and War Crimes Tribunal". While observers were still trying to understand his true intentions, the former world football star, a renowned striker, returned to the subject during his speech to the UN General Assembly on 25 September.

Dialogue is not enough

In a previous UN speech last year Weah said that he favoured “dialogue as a conflict-resolution mechanism, so that as a government and people, we could together focus our efforts on poverty-reduction, growth, and economic development, rather than on retribution”.

But he has now been forced to recognize that many Liberians see things differently. “However, since that time, there has been a rising chorus of voices from many quarters, calling for the establishment of an Economic and War Crimes Court”.

These calls are quite uncomfortable for a president who is also facing rising popular dissatisfaction with his socio-economic record. “We are at a loss to understand why the clamor for the establishment of the court is now being made, almost a full decade after it was first called for [by the Truth Commission report]”, complained the man who has led Liberia since January  2018. But then he tried to reassure people: “What I have discerned from their cries is that it is important to bring closure to the wounds from the 14 years of Liberia’s brutal civil war, and that we need to agree on a mechanism that would guarantee the sustenance of peace, stability, justice, and reconciliation, as well as enhance our prospects for economic recovery”.

Some observers see this declaration by President Weah as a major step towards the creation of this court, while others think the former football star is blowing hot and cold and refusing to face his responsibilities. “It’s clearly a fundamental step for the fight against impunity in Liberia,” says lawyer Romain Wavre of Civitas Maxima, a Swiss NGO which has been instrumental in getting Liberian trials in other countries. “It is now up to the Liberian authorities to build on this and set up a credible justice mechanism. Also it is essential that this mechanism allows victims to be heard and to obtain reparations.”

Elise Keppler, associate director of the International Justice Program at Human Rights Watch, sees Weah’s words as a hopeful sign. “His decision to back justice for past crimes gives impetus to the legislature to act swiftly to establish the court and seek assistance from Liberia's partners to do so. This is important for the victims of the crimes and to build respect for rule of law in Liberia.” 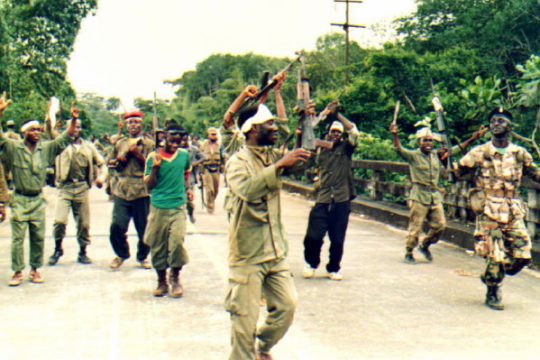 “With Weah's apparent endorsement, the chances of a war crimes court being established in Liberia have certainly increased,” says Mark Kersten, Senior Consultant at the German NGO Wayamo Foundation. “However, we need to manage expectations. Weah has generally been ambivalent about the idea of a court, saying that the desire for accountability had to be balanced against other goals, including development and peace.” Kersten also points out that “there are numerous political figures in positions of significant influence who are dead-set against a court, with some worrying that they would be implicated in any investigation or prosecution of war crimes and economic crimes”. “We also don't know how the National Legislature will respond to Weah's request for ‘advice’ on setting up a tribunal,” he continues, advocating “cautious optimism, alongside continued pressure on Weah, legislators and other powerful figures in the country”.

Stephen Rapp, the American former Prosecutor of the Special Court for Sierra Leone, has a similar reading of Weah’s position. “President Weah is undecided on whether to seek creation of a tribunal,” he told JusticeInfo in an interview in August. “It will require pressure from members of the Legislature and the public to remind him of his past promises to support a tribunal that can deliver justice to the victims and survivors of the mass atrocities committed in Liberia.”

But Richard Panton, Assistant Professor of Public Administration at the University of Liberia, thinks Weah is just playing for time. “Weah is playing a game to escape taking responsibility for establishing the court. He quickly shifted the creation of the Court to the Legislature. His rationale is that it’s the Legislature's responsibility (…). He seems to believe that his supporters and some key legislators that will be affected by the creation of the court will not accept to craft a bill for the establishment of the court. So in essence he is buying time”.

A leading opponent of the plan for a court is Prince Johnson, a Senator from Nimba in the north. Johnson dreams of one day becoming president of Liberia. Now an evangelical pastor, he is not ashamed to have supervised the death from torture of former dictator Samuel Doe in 1990. Doe's assassination was one of the events that plunged the country into a long war that left more than 200,000 people dead. “I saw reports that Prince Johnson had threatened to take the country back to war if a tribunal is created,” Rapp told JusticeInfo. “Some of my friends tell me that his threat is hollow because he has not been a bush fighter for 27 years and the guns are now rusty and broken.  In my view it is exactly because of threats by persons like Prince Johnson that a tribunal is necessary for the democratic future of Liberia. It would not be a true democracy if threats of violence could deter the people's representatives from supporting institutions that are necessary to provide justice for all.”

With the current political configuration, what are the chances that parliament would approve a law to create such a court? “It is highly likely to get the legislature to vote for the creation of the court provided civil society organizations, international organizations and powerful countries pressure and lobby the legislators,” says Panton. “Already a good number of legislators have signed a resolution for the establishment of the court. However, more work has to be done.”

And Hassan Bility, director of the Global Justice and Research Project in Liberia, thinks things are shifting, even in Johnson’s stronghold. He points out that several parliamentarians from the ex-warlord’s home county of Nimba have come out in favour of a special court. “This is a clear indication that those whom Prince Johnson depended on are now supporting accountability through the creation of a war crimes court”.

But how much independence would a prosecutor and judge of such a court have if it is finally created? "That's the key question,” says Wavre. “The debate - particularly in parliament - is still in its infancy. It is now up to Parliament to determine what form this judicial mechanism will take, and to take all measures to ensure that it is impartial. This could be done through the support or involvement of the international community.  As I said, implementation of the Truth Commission's recommendations is still in its infancy. Everything will depend on the law passed by Parliament."

“The court proposed by the Truth and Reconciliation Commission would be a type of hybrid court with international judges serving along domestic judges, which could help bolster the court's independence and impartiality,” says Elise Keppler.

“The court system and judges are compromised by their membership in free masonry,” adds Panton. “Almost all judges, lawyers and court officials are members of this organization and are under obligation not to forsake a brother. So, to make the court independent requires the oversight of international community.”

A May 14 video appeal launched by a group of victims continues to circulate on the Internet, calling for a special court and asking for Weah’s support. “You are now sitting in the right position to address the issue of accountability in our country,” say survivors. “President Weah, we are calling on you to take justice as a priority.”