Islamist party Ennahdha emerged the leading party in the elections, with 52 seats out of 217 in the Assembly of People's Representatives. But it will not be easy for it to form a 109-seat majority. Ennahdha is followed by Nabil Karoui's Kalb Tounes (Heart of Tunisia) party, formed in June, which won 38 seats. Nabil Karoui, a presidential candidate suspected of tax fraud and money laundering, has just lost the second round of the presidential elections to Kaïs Saïed, an independent, anti-system candidate. The social democrat party Attayar  ("Democratic Current") of human rights activist Mohammed Abbou won 22 seats. In fourth place, with 21 seats, is the Karama Coalition, a movement to the right of the Ennahda Islamists recently formed by Seifeddine Makhlouf, a lawyer known to have defended alleged Salafists. The modernist-progressive formations from the Nida Tounes party of Béji Caïd Essebsi (BCE), the former president who died on 25 July, were splintered and recorded a clear decline compared to the 2014 legislative elections in which Nida Tounes won the majority of seats. This new Parliament, which is extremely fragmented, also sees the entry of a large group of independents. There are 40 of them in all, whose positions will count for a lot in the coming months and years to tip the balance for or against the continuation of transitional justice processes.

Attayer was the only party to mention transitional justice in its electoral programme. This is the party of Mohamed Abbou, a dissident lawyer sentenced in 2005 under Ben Ali to three years in jail for articles published on the opposition website Tunisnews. Its programme stressed the need to publish the final report of the Truth and Dignity Commission, laid down the principle of police and judicial reform, advocated the fight against corruption, marginalization of internal regions and impunity, and promised remembrance of the victims. But otherwise the 15,737 candidates running barely mentioned in their meetings, speeches and flyers how to deal with Tunisia's long history of human rights abuses. Even Ennahdha, which draws electoral support particularly from victims of human rights violations, practically ignored the issue.

"Apart from Attayer, the parties did not mention transitional justice in their programmes because they feel they gain nothing by raising an issue that is divisive in Tunisia,” says Khayem Chamli of Lawyers without Borders (ASF), who monitored party programmes as part of the "La Roujou3" (or "Never Again") initiative by three civil society organizations (Bawssala, ASF and the Tunisian Forum for Economic and Social Rights). “Also, the stakes have changed since the 2014 elections when transitional justice was still on the political agenda. Today economic problems and challenges take precedence over everything." 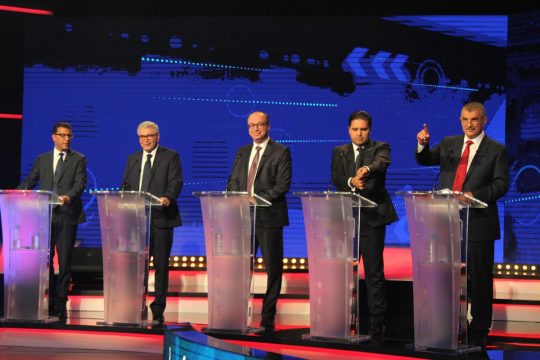 Nevertheless, the conditions for continuation of a process that began after the Revolution are, according to several observers, better than in 2014, when the Nida Tounes party won 86 seats. Its president, “BCE”, had mounted his entire campaign on the idea of "turning the page on the past once and for all ". This was understandable given that Nida Tounes drew its support largely from people close to the former Ben Ali regime. The elections at the time produced a government, parliament and president that were frankly critical of the Truth Commission and its president, Sihem Bensedrine. Between 2014 and 2018, the Ennahdha party, when it joined forces with Nida Tounes, made transitional justice an object of "little arrangements between friends", voting for the law on administrative reconciliation in accordance with BCE's wishes. There is no evidence that Ennahdha will not  not pursue this attitude, depending on the alliances it forges to govern and legislate -- especially if it approaches Nabil Karoui's Kalb Tounes, a Nida Tounes splinter party hostile to transitional justice. But one victim, Raoudha Gharbi, thinks that "Ennahdha's [electoral] base will weigh in heavily, I am sure, in the negotiations and concessions of their movement on transitional justice".

And in the new Parliament, "revolutionary" and transitional justice groups are emerging, such as Attayer, the Arab Nationalist Party Achaâb and the Karama coalition. They are dominated by people like Leyla Hadad, a well-known lawyer for families of the martyrs and wounded of the Revolution; former Truth Commissioner Khaled Krichi. Political negotiations have already begun with these parties. Ennahdha has four months to find the right alliances. Otherwise, the President will have to dissolve Parliament so fresh elections can be called.

All eyes are on the new president, elected last Sunday. In Tunisia, the President may propose legislative initiatives to Parliament, and these may concern transitional justice. The President may also refuse to sign laws that he considers unconstitutional, which might also concern transitional justice. This is where his prerogatives on this matter end. The 2014 Constitution created a mixed system, where real power is vested in a two-headed executive: the Assembly of People's Representatives (parliament) on the one hand, and the Prime Minister on the other. The transitional justice process seems to have stalled since Youssef Chahed did not as Prime Minister publish the Truth Commission final report in the Official Journal, although the specialized chambers continue, quietly, to examine cases of serious human rights violations investigated by the Commission before the end of its mandate.

"Two indicators will tell us how much the next parliament and government intend to continue the process,” says a transitional justice expert close to the human rights community. “The first is the establishment of the commission to follow up on the Truth Commission’s recommendations. The second is the Dignity Fund to provide reparations for victims. In a few weeks' time, when the new finance law is being discussed, we will know whether the government has earmarked resources for this fund."

Sihem Bensedrine, who was president of the Truth Commission, seems confident. “This political back and forth that we have seen since the Revolution is quite normal,” she says. “The euphoria of revolution is always followed by nostalgia for the old regime that appears to represent security and economic stability. After trying a return to the old system, the people, who are still waiting for change that bears fruit, have corrected their choice. We are convinced that the next government will look much more seriously at the Truth Commission’s recommendations than the previous one. President Kaïs Saïed’s promise to apply the law is very important here.”