“It is impossible with regard to the law and the facts that Mr. Ongwen can be both victim and perpetrator in the context of a criminal environment where he himself was a victim,” argues Charles Taku, co-counsel for the former Lord’s Resistance Army (LRA) commander transferred to The Hague in early 2015 to be tried. Captured by the LRA as a child, Ongwen was “permanently subject to a system of brutality, violence and traumatic experiences ruled by unimaginable spiritual beliefs and did not know any other life”, the Cameroonian lawyer told JusticeInfo.  Ongwen is charged at the ICC with 70 counts of crimes against humanity and war crimes for acts that took place between July 2002 and December 2005 in his native northern Uganda. To date, some 50 witnesses have been called for his defence and a further 10 are expected to testify, including two mental health experts.

Lead counsel Krispus Ayena Odongo, himself from northern Uganda, expanded in his 23 September 2018 opening statement on the lost youth of his client, kidnapped at the age of 9 by Joseph Kony's terrible LRA, "indoctrinated" and forced to spend 27 years of his life in a world of constant terror and violence. The Prosecutor, who does not seek to contest this fact, nevertheless considers only that this might be a mitigating circumstance to be assessed by the judges.

Yet it is the heart of the defence case. "Mr. Ongwen was and remains a victim, like all child soldiers in the world,” claims Taku. “The LRA's brutal spiritual criminal environment has had an impact on his ability to distinguish between good and evil and/or his ability to disobey the orders of Joseph Kony and his spirits without devastating consequences for his life." And the lawyer says others are the guilty ones. "Mr. Ongwen is a scapegoat for the failure of the Ugandan government and the international community to protect the civilian population in the north, to arrest and prosecute Joseph Kony at the ICC or in Ugandan courts.” His line of defence can also take on a political dimension. "Ongwen's trial alone will not provide a solution for the victims. The Ugandan army is not being prosecuted, it is participating in this trial as a facilitator of the investigation and a prosecution witness for crimes committed in a war in which it participated and in which its responsibility for several crimes is implicated. This is not surprising in a world where victor's justice is the rule of the game," says the lawyer.

Moses Paul Sserwanga, a human rights lawyer and journalism consultant  based in Kampala, has followed the defence case for Ongwen. He thinks the defendant cannot escape his responsibility. “Once you reach 18, you have the legal capacity to determine what is right or wrong,” he says, stressing that others who were kidnapped in the same conditions as Ongwen managed to escape the clutches of the LRA. “He had the capacity to escape or surrender just like many of their victims did,” he told JusticeInfo. The Ugandan jurist nevertheless agrees with the defence when it complains that the investigations have targeted only the LRA without examining the responsibility of the Ugandan army.

In support of its case, the defence has also called retired major Pollar Awich, an ex-child soldier who rose up in the regular Ugandan army after first fighting in the former rebel National Resistance Army (NRA) of Yoweri Museveni, the current President of Uganda. At a hearing on 26 February this year, the retired officer claimed that children captured by the LRA “were not acting out of their own volition”. “And even subsequently when they became older, they were just acting, they were being used. They were not acting out of their consciousness. They [the LRA] could have used anybody. I agree with that statement that indeed Ongwen himself is a victim,” argued Awich, who was called as an expert witness. Awich is Chairman of the Uganda Chapter of the African Network for the Prevention and Protection Against Child Abuse and Neglect (ANPPCAN). He was also a member of the United Nations Committee on the Rights of the Child. He said that he had met, in his military career and in the course of his work for these two international institutions, many former child soldiers, including those who had been taken hostage by the LRA. 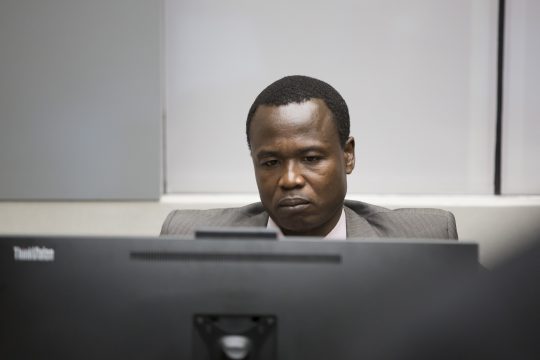 Dominic Ongwen, the imperfect poster child of the ICC

In thrall to spirits

The defence has also called four healers to support the claim that Ongwen was in the thrall of spirits. One of these “Ajwaki” (traditional healer in the local Acholi language) testified at the beginning of October 2018. With his face hidden and his voice scrambled, he claimed that Kony used the spirits to retain his captives. "There are some children who upon return were brought to me for therapy and I would ask them what happened in the bush. They would tell me when you are there, something stops you from going home even if you are nearby.  I asked them what made them lose interest to return and they said they didn't know. I believe Kony used spirits to create confusion in them and to control their minds," declared the healer. And whilst Judge Bertram Schmitt appeared more amused than convinced, the healer insisted that "spirits are real. And I can confirm this".

Ongwen's lawyers are also presenting an alibi for the defence. Among the witnesses called for the alibi was Sam Opiyo, also a former LRA member. During his testimony on June 13 and 14 this year, Opiyo denied that Ongwen was involved in the attack launched in Pajule on October 10, 2003, during which dozens of people were killed, women and children abducted. "Mr. Ongwen was injured at the time. He had a wound around his knee, he couldn't go. According to the rules in the bush, when you were wounded, you didn't go to the battlefield,” he told the court.

With regard to the attack on the Obok IDP camp on 5 June 2004, one of the defence witnesses was Tommy Obote, a former local administrative official, who indicated that he had visited the site the day after the events. He claimed that he did not hear at that time or afterwards that that Ongwen had been involved in the attack. "I started hearing Ongwen's name when the case was in court here," said Obote, who testified in mid-August. Other witnesses said that Ongwen did not take part in the attacks on two other IDP camps, Lukodi and Odek.

Ongwen is also accused of reducing women to sexual slavery. Among the most recent witnesses is Florence Ayot, a former "wife" of Ongwen with the LRA in the bush. In her testimony at the end of September, she described her former partner as a kind person who treated his wives with love and respect. "I loved him for the way he lived with people. He was not a quarrelsome man. There was nothing that disgusted me about him," Ayot said, adding that she had shared her life with three other women. For Ayot, Ongwen's polygamous household was quite happy. "We didn't have any problems. We lived peacefully together," she said, noting that she was separated from Ongwen when she was captured in 2005.

In Kampala, interest in Ongwen's trial is declining over time, but the case continues to be followed by the big national media. Ongwen's home region, on the other hand, continues to closely follow the case. Traditional Acholi chief Rwot Yusuf Okwonga Adek expresses a common grievance in this region. “There are stories of (government) soldiers involved in crimes. As much as we blame the LRA, the army should also be blamed because they had a hand in these crimes and not only the LRA,” he says. The traditional chief also thinks that the local traditional system of settling conflicts, “Matu put”, would have been a better way to deal with LRA crimes. “If it was ‘Mato put’, by now justice would have been delivered,” he says. “Everyone would be happy and united.”

Victims denounce a distant, late and slow justice.  “More people keep dying as a consequence of this war. To what purpose if the case is decided 10-20 years after the victims have long died?” asks Abednego Langoya, a survivor of LRA attacks. For former primary school teacher Scolastika Akello, 52, also from the north, “this is wastage of money. Instead of spending a lot of money on the case that won’t end, why can’t this same money be given to the victims of LRA, who hardly have what to eat and feed after they lost everything to the rebels? Holding a trial outside (the country) when the real victims are in Uganda, does it serve a purpose?”

But Alex Obwalatum, 68, a retired councillor in Amuru district, northern Uganda, wants to believe in justice. “Scepticism is always there especially when a high profile case takes long to be concluded. People need to be patient as justice cannot be delivered over night. There have to be proper investigations, due court processes and judgment no matter how long it takes.”

Grace Matsiko and Ephrem Rugiririza
All reports from this author
Grace Matsiko is a veteran journalist with 26 years experience having covered the armed conflicts in Uganda, South Sudan, Sudan, DR Congo, Burundi, Central African Republic and Somalia. His area of interest is investigative journalism with focus on security, defence, justice and politics. He has worked with leading international news networks such as Agence France Press (AFP) since 2006.