On November 4, Yankuba Touray hit news headlines in The Gambia again. His lawyer Abdoulie Sisoho asked the High Court to arrest the executive director of the Truth, Reconciliation and Reparations Commission (TRRC), Baba Galleh Jallow, for his failure to appear in court after a summon.

Jallow was summoned to submit the testimony of Ensa Mendy, a witness before the TRRC who had implicated Touray in the killing of a former Finance minister Ousman Koro Ceesay. Koro Ceesay was killed in June 1995. His charred remains were found in his dented vehicle along Jambur highway, about an hour drive from Banjul, the capital city. Gambia was then ruled by a Military Council chaired by president Yahya Jammeh, who now lives in Equatorial Guinea. Yankuba Touray, a key member of the military junta, was Local Government Minister while Edward Singhatey was vice-chairman of the Council. Both Touray and Singhatey have denied being involved in the murder. But Touray has been charged for it on the basis of evidence given in front of the TRRC.

The evidence before the TRRC

On February 28, a former soldier who was now serving in Gambia’s immigration services, confessed to Koro Ceesay’s murder before the TRRC. Alagie Kanyi said the crime scene was the house of Touray. He alleged that the architects of the crime were Edward Singhatey, his brother Peter Singhatey, and Yankuba Touray. According to the justice minister at the time, Mustapha Marong, the case was never investigated by the military leaders. “Most of the civilian ministers in the cabinet thought Koro was murdered,” alleged Marong before the TRRC last April.

Edward Singhatey appeared before the TRRC on October 17. He denied any knowledge of the murder. His orderly and his driver, Lamin Marong and Lamin Fatty, said they dropped him at Touray’s house on the night of the murder. Singhatey assured, to the contrary, that he was at home. He said Marong and Fatty had been “kicked out” of his house, suggesting they have a motive to lie against him. But Jangom, the guard commander at Touray’s house, also said that after returning from their patrol, he saw Singhatey at Touray’s house, smoking. Singhatey retorted that he does not smoke, suggesting Jangom was also a liar.

Touray appeared before the Truth Commission on June 26 but he refused to testify on claims that he has constitutional immunity. His uncooperative behavior with the TRRC prompted a national outcry. The Commission ordered his arrest on charges of contempt. And Justice minister Abubacarr Tambadou asked that Touray be charged with murder. The trial has now begun; the court typically sits once a week. 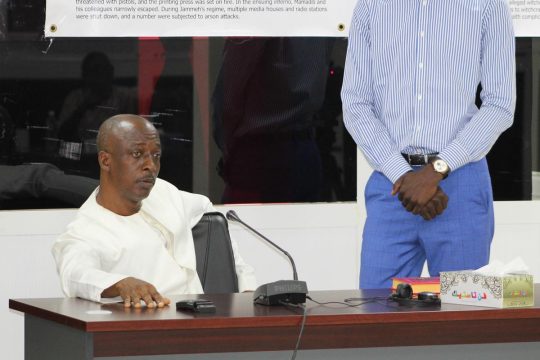 Ensa Mendy is the second prosecution witness to appear in the trial and the first of significance on the merits of the case. According to his testimony before the TRRC, Mendy was an orderly to Touray during seven years. Before the court last week, he said that he was not with Touray on the evening of the murder. Touray had asked him to go home from work. (The escort of Touray stayed at his home.) But later in the evening, he called him back to join a patrol around the beach, some 10 kilometers from Touray’s residence. Mendy said that two people were on patrol with him: Ahmed Jangom, the guard commander at Touray’s residence, and one Lamin Bojang, a former schoolmate of his.

“Was it part of your duty as a bodyguard to be also deployed on patrol at the beach site?” asked the prosecutor.

“Apart from that particular day, were you ever asked to go on patrol by the accused person during the period you served as a bodyguard/orderly?”

After Mendy returned to Touray’s residence from the patrol, between 1 and 2 a.m, he said he saw Touray going to his bedroom from the sitting room. “His bedroom and our bedroom are opposite each other. So I stood at my door and I saw that the house was so wet with water. I proceeded to the sitting room, all was muddy with water,” said Mendy. “At the entrance of the sitting room, I saw his uniform placed on the ground, I observed it and I saw burns around the side pocket. Then I said something must have happened here.” Mendy said he heard about the death of Koro Ceesay only when he got to work the following day.

Touray’s lawyer challenged the fact that Mendy was ever appointed as bodyguard to his client. “I played two roles: his bodyguard and an orderly”, replied Mendy. “I was given an arm to protect him and at the same time I was his orderly.” Touray’s lawyer also challenged Mendy’s integrity. He said Mendy had made contradictory statements in his written and oral testimonies to the TRRC and his statement to the police investigators regarding Touray’s involvement in the killing. That was the basis for his request of Mendy’s TRRC statements to be put before the court.

Following the request for the arrest of its own executive secretary, the Commission was forced to react. “It is sufficient in this particular instance that an authorized official of the TRRC was present in Court in pursuance of the Summons to produce documents. The Court was also notified of this fact by the Prosecutor in charge of the case,” the Commission’s legal team said on November 5. The prosecutor also urged the court to dismiss the defense’s request.

Waiting for the star witness

The star witness in Touray’s trial will be Alagie Kanyi, who confessed before the TRRC participating in the murder. However, Singhatey, a trained lawyer, has already said that they would not have trusted Kanyi for such a mission. And Kanyi has already ruined a contempt case against Touray and another person with three contradictory statements before the TRRC, a lower court and the high court.

Yankuba Jallow, a Gambian journalist working for Foroyaa newspaper who has been keenly following the case, said the office of the prosecutor has a tough fight. “I believe the State is struggling with having substantial evidence to prove the guilt of Mr. Touray. According to the testimonies so far before the TRRC, the incident happened when even the guards and orderlies weren’t there,” said Jallow. “Murder is a capital offence that needs a high standard of proof. It would have been easy if Edward Singhatey had admitted participating in the murder but since he has denied culpability, who is there to prove the guilt of Mr. Touray?”

Gambian rights activist Madi Jobarteh thinks otherwise: “All of the participants in that murder, except Edward Singhatey, appear to give compelling evidence that the murder took place in [Touray’s] house. Even Singhatey never denied that Koro was killed in Touray’s house even though he cast doubt about it. What makes this case compelling is that Yankuba would be required to provide an alibi or deny Koro being killed in his house. With strong cross examination and provision of more tangible evidence the State indeed has a strong case. The space and comfort Singhatey enjoyed before the TRRC do not exist in a court.”

The state prosecutors plan to call seven witnesses to support their case.