Last week, Gambia’s Truth, Reconciliation and Reparations Commission (TRRC) completed its fourth week of investigations into a witch-hunting campaign that affected dozens of people ten years ago. In 2009, Gambia’s president Yahya Jammeh – who ruled the country from July 1994 to January 2017 – allegedly decided on a witch-hunt in which people suspected of witchcraft were forced to drink concoctions that allegedly sent dozens to their graves. So far, the TRRC has counted 39 victims who are believed to have been poisoned to death during the campaign. People from four highly affected communities have testified before the TRRC while the Commission has been traveling and holding hearings in some of the most affected villages, including Essau, Sibanor and Jambur.

Sibanor is one of many settlements in Foni, a region where Jammeh still enjoys significant political support, nearly three years after he was forced into exile. The five National Assembly members of Jammeh’s Alliance for Patriotic Reorientation and Construction Party (APRC) all come from Foni. On roadsides one can see many green flags, the colour of the APRC party.

Here, during the witch-hunt in 2009, people were forcefully captured from several communities. According to testimonies before the TRRC, those captured in Foni were taken to Kanilai, Jammeh’s home village, two hours drive from the capital city, Banjul.

“The way you look shows you are a witch”

Mustapha Fanneh, 73, was one of those captured in Sintet, a village located half an hour drive from Kanilai, and one of those affected by the witch-hunting campaign. Fanneh was Sintet’s village head. Like dozens of other victims, he was put under the escort of soldiers and Green Youths, a civilian vigilante group associated with Jammeh. As they arrived in Kanilai in two filled-up buses, they were taken to the residence of the former President, said Fanneh to the TRRC.

Several witnesses said the place where they were given a concoction was like a toilet. However, no one knew what the concoction was made of. Very few remembered their immediate actions after drinking while some would only occasionally recall vomiting. After drinking the concoction, Fanneh recalled that the witch doctors and the leader of the accompanying soldiers, Major Solo Bojang, insisted that they must confess about people they had allegedly killed through witchcraft. Fatou Camara, a native of Sintet and the third witness to have testified in Sibanor, faced a similar fate. “We were forced to drink a concoction on the second day because we would not agree we were witches. We were all given second doses for refusing to admit that,” she said. “They would look at people and say that even the way you are, your appearance, shows you are a witch.”

Death along the Gambia River

Essau is separated from Banjul by a four-mile river crossing. Serene, it is one of many communities that are settled along the river that splits Gambia in the middle. This is where the TRRC sat on December 3. Here, according to head counts from various testimonies, eight of the victims allegedly died from the concoction they were given to drink. Like the victims from Jambur, people captured in Essau were taken to Kololi, an urban settlement half an hour drive from Banjul.

Aja Mba Jai Drammeh is one of the witnesses who appeared before the Commission in Essau. She was not a direct victim but her daughter, Binta Ceesay, was. Drammeh explained how Binta was captured in Essau and taken to Barra where she was given a concoction. After drinking it, Binta started struggling with a boil on her knee and excessive vomiting. She died shortly after. “Binta would keep crying because of her young family. She had twins," said Drammeh, who has taken care of Binta’s children ever since.

Under the tent set up by the TRRC, Drammeh’s relatives started to cry. They were not the only ones moved by Drammeh’s story. Imam Ousainou Jallow, one of the commissioners of the TRRC, pledged to support Drammeh’s family with financial assistance every month.

The connections with Jammeh

Unlike in most alleged criminal acts investigated by the Commission for almost a year, very few perpetrators have so far testified about who played any role in Jammeh’s alleged witch hunt. The former chief of the Gambian police, Ensa Badgie, confessed helping to facilitate the work of the witch doctors at the police headquarters. He told the Commission that he was called by Jammeh and instructed to comply with the witch doctors. “Former President Yahya Jammeh telephoned me personally. He told me Major Solo Bojang and some marabouts were coming. He told me: if you don’t comply, your head will roll. And if anyone does not comply, make sure the person is sacked,” Badgie testified. Within ten minutes after the call, the witch doctors arrived at his office. They were dressed in a red attire that had small mirrors and cowrie shells on it and took off with dancing, drumming and chanting.

Witnesses said that the witch doctors were being protected by soldiers led by Major Solo Bojang, a member of Jammeh’s hit-squad that was taking orders directly from him. Vehicles transporting the marabouts were identified by people to have come from State House. In Jammeh’s region, people captured testified having been given the poisonous concoction at the President’s own residence. 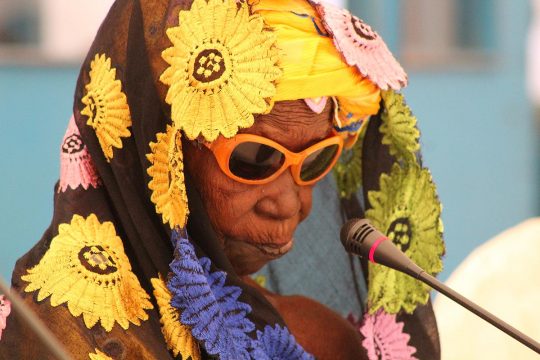 In March 2009, when the witch hunters arrived in Essau, Omar Jawo was the head of the police in the region. He was the first alleged perpetrator to appear since the TRRC started its community hearings outside Banjul. All the others were victims. According to evidence before the Commission, Jawo had participated in the capture of the so-called witches and wizards. Jawo admitted that he escorted the “witch doctors” around in Barra and Essau, as well as captives who were being transported to Kololi, away from their homes. He also said he was taking orders from Major Bojang and he described the conditions under which he found other captives at a compound in Kololi. “I met some people in a very bad condition. I regretted why I was there. I saw people crying. It was inhumane. I even regretted why I escorted people there,” said Jawo. “At that time, it was darks days. You just have to be loyal to Yahya Jammeh.”

“You went to the homes of respected people in this community, took them out of their homes and participated in parading them as witches,” stated Essa Faal, the TRRC lead counsel.

“I did not deny being there but it was led by Major Solo Bojang and witch doctors,” replied Jawo.

“And your presence gave it the official approval, didn’t it?”

“It is indeed. The presence of the police, especially the highest-ranking police officer in the region, made it an official sanction.”

“That is to put it mildly. This is the fact.”

“A 16-year old boy who was to sit for an exam was taken away. What did you do to stop it?”

“A suckling mother of twins was taken away to be given a concoction. What did you do to stop it?”

“What could I have done? Even the IGP [Inspector General of Police] could not do anything.”

“An eight-month pregnant woman was taken away, did you stop it?”

“You went after the people as a free man. You went around and took these people from their compounds, didn’t you?”

“I cannot deny that.”

“Do you accept that these arrests were unlawful?”

“By the time you did it, you knew what you were doing was unlawful?”

“Yes. I was the police officer in command. As a senior man I did it but I was under duress.”

“You did not do it as a senior man, you did it as an individual.”

“So, you now want to deny that you physically and individually went into town to capture people for the witch hunters?”

“What was the duress?”

“But that is a speculation, isn’t it?”