In the courtroom of the Bangui Court of Appeal, the tension is rising. Sitting on four rows of benches, some 30 defendants are waiting, handcuffed two by two or individually, closely watched by prison guards, along with about 10 members of the Central African Armed Forces. Outside, two armoured vehicles of the United Nations Mission in the Central African Republic (MINUSCA) guard the area. The court is preparing to try more than 30 anti-Balaka militiamen, including three of their key leaders, Romaric Mandago, Kevin Béré Béré and Crepin Wakanam, alias Pino Pino.

These names take us back more than three years, to the Bangassou region in the south-east of the Central African Republic (CAR). Under the pretext of protecting Christian populations against the Union for Peace in the Central African Republic (UPC, led by Ali Darass), a faction of the Seleka armed coalition dominated by Muslims, self-defence groups were formed in this region. They quickly gained a reputation for their cruelty against civilians, especially Muslims suspected of collusion with the Seleka and persecuted as far as the camps for displaced persons, but also Christians.

These “anti-Balaka” are also blamed for the deaths of around ten UN soldiers, five of whom (four Cambodians and one Moroccan) were killed during the attack on a convoy in Yongofongo. They also directly attacked humanitarian NGOs. Their internal rivalries also caused many victims within each faction, such as “General” Ngade, whose assassination in December 2017 is attributed to Pino Pino.

Pino Pino and 33 of his men were arrested in the Democratic Republic of Congo (DRC) on 15 May 2018 and extradited to Bangui the following month. Béré Béré and Romaric surrendered themselves to MINUSCA in January 2018.

Why not the SCC?

In the courtroom, after the jurors have been drawn by lot and the presence of the defendants has been verified (one of them has died in custody, another has been remanded in custody and is not present), the referral order is read out. Before their participation in a militia, the defendants were ordinary citizens — fishermen, bricklayers, farmers –, some of them from Bangassou (one of the witnesses, a former prefect of Bangassou, stated that 75% of them were not from the city), and others from Mobaye, Bakouma, or Boali. The charges are heavy: war crimes and crimes against humanity, criminal conspiracy, assassinations, illegal possession of weapons and ammunition and offences against internationally protected persons. The Penal Code provides for prison sentences with fines, forced labour and even the death penalty (although the CAR has a moratorium on executions).

In the last trial of a senior leader of armed groups before the Bangui criminal court, that of Alkali Said (considered by the prosecutor to be the “number 2” of the Patriotic Movement for the Central African Republic, MPC), the charges were similar but the weakness of the case – due to the impossibility of investigating on the spot – allowed the defence to get most of the charges dismissed for lack of evidence. But this new case seems to be much stronger. “We have produced some evidence, the gendarmerie has brought some, and so has MINUSCA,” says Albert Panda, a lawyer for the victims’ group and vice-president of the Central African Observatory for Human Rights (OCDH). As part of their joint programme, the OCDH, the Central African League for Human Rights (LCDH) and the International Federation for Human Rights (FIDH) became civil parties on 10 July 2018, after having worked hard to collect evidence and find witnesses.

Why choose to bring a civil action before the criminal court rather than before the Special Criminal Court (SCC), a jurisdiction established by the Central African government and the United Nations and which has still not issued any indictment? “The criminal sessions can very well judge the most serious crimes,” says Panda. “This procedure began before the Special Criminal Court was actually set up. There are mechanisms for collaboration between these courts. The SCC was informed of this procedure. It preferred to let the Criminal Court continue because it could have asked to take the case, which was sufficiently substantial,” adds the lawyer. Pointing to a heavy canvas bag containing the case files, he smiles: “You see, there was a lot of information, a lot of evidence.” 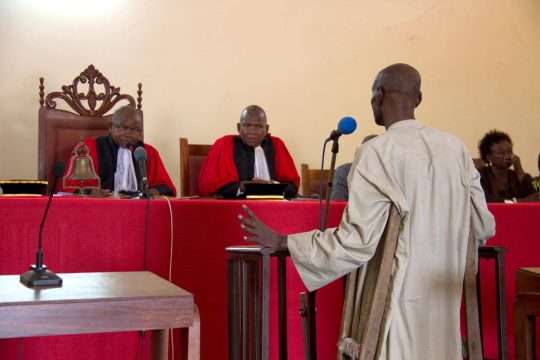 The first target of the interrogations, “General” Kévin Béré Béré, 33 years old, wearing sweatpants and a plain shirt, first stands with his arms folded, answering all the questions with aplomb. He says he arrived a month after the events in Bangassou, after working on sites in the region as an artisan miner. No, he was never part of former President Bozizé’s presidential guard (as he has claimed on numerous occasions in the past). He has never even “held a gun”. But he seems suddenly dizzy. He asks for a chair and a rest. “He is pretending,” says Attorney General Tambo. “Don’t let him get too clever!” After discussion with his defence, Béré Béré says he’s ready to continue.

Prosecutor Tambo then takes over again. He presents his pieces of evidence one by one, some of which seem overwhelming. A letter bearing the signature of “General” Béré Béré, a logbook also signed by him containing an inventory of the weapons possessed by his group (about a hundred AK 47 machine guns, three RPG grenade launchers, missiles and several million rounds of war ammunition), and a photo showing him surrounded by these same weapons of war. Two written testimonies mention his presence at the scene of the attack on the MINUSCA convoy in Yongofongo. He was even reminded how much his men charged at the roadblock they held: 2,500 CFA francs (just under 4 Euros) for vehicles and 250 for pedestrians.

Sitting down, the defendant takes a moment and then denies everything, point by point. He did not sign the letter nor the logbook, he does not recognize himself in the photo with the weapons. He was not present in Yongofongo. He presents himself as a “mediator”. “I did a good job in Bangassou. I worked for the religious platform, I risked my life for the people,” he says.” There’s nothing that links me to the vigilantes.” At this point there is a stir in the public gallery. A victim gets up and wants to talk.

At the bar, this Muslim woman does not let herself be impressed by the presence of the “General” at her side. On the contrary, she shows a photo of her house and accuses Béré Béré of having made it his base. “He said he was a general who served from Bangassou to Obo [in the east of the country] and controlled six thousand men,” she testified. “He killed many people. He killed a Muslim man and tore his genitals off. Béré Béré’s wife said that a Muslim’s house deserved only litre of gasoline.” Her opponent stuck to his strategy: “You have to show proof that I was there,” Béré Béré said.

Albert Panda thinks this attitude will have its limits in a trial that promises to be longer than usual: “You can’t stop him from having such a line of defence. We will watch and see how things evolve. There are witnesses and victims who will testify, and when you don’t tell the truth, it will catch up with you in the end.”