The verdict was first met with calm, then there was screaming and kicking of furniture, as the convicts realized they would spend a good part of their lives behind bars. For all the defendants and particularly for the leaders, the sentences are heavy. Kevin Bere Bere, Romaric Mandago, Crépin Wakanam (alias Pino Pino), Patrick Gbiako and Yembeline Mbenguia Alpha, the five main leaders of the Anti-balaka vigilante groups in Bangassou (south-east Central African Republic) were each sentenced to hard labour for life.

“They would have deserved the death penalty,” prosecutor Eric Didier Tambo said in his closing arguments before calling for life imprisonment out of respect for a “promise” to the international community. The court followed his request in the case of the group leaders, but reduced the sentences requested for the other 23 militiamen, for whom he had called for 20 years in prison. They were instead given 10 years’ imprisonment or 15 years’ hard labour for criminal conspiracy, illegal possession of weapons and murder. All of them were ordered to pay substantial sums to the victims as damages. Their property will be confiscated for this purpose.

The five Anti-balaka chiefs are the first to have been convicted of both crimes against humanity and war crimes in this unprecedented trial for the Central African Republic. Admittedly, the Bangui Criminal Court has not removed all the grey areas hanging over the crimes committed in Bangassou in 2016 and 2017. But the trial debates, particularly around a meeting on 3 September 2016 with Bangassou authorities (including the sub-prefect) and religious dignitaries, revealed more about how the vigilante groups were created.

This historical and local context was invoked by both prosecution and defence. Failure of the State, past incursions into the region by Seleka rebels and widespread insecurity in the CAR all went to explain the formation of local Anti-balaka self-defence militias, according to the defence. “We don’t deny that our clients committed sickening abuses,” said lawyer Anatole Maïtovo in his closing arguments, “but they acted as human beings. These groups were not formed to do evil.” He also added that “these children were at one time seized by madness”, and that “those who call themselves witnesses or victims also took up arms”.

“They meant to attack everyone”

Civil parties also presented their view. “It was the local authorities that allowed the self-defence groups to restart,” said lawyer Mathias Morouba, invoking the responsibility of the State. Yes, the Seleka forces – who overthrew President François Bozizé in March 2013 – came. They raped and pillaged. But three years later at the time of the facts alleged in this trial they were no longer there. And the crimes of the militiamen were exceptionally cruel. “How many people were cut to pieces? They ate them and became cannibals. They destroyed a whole area [attack on the Muslim quarter on May 3 2017], 723 houses.” Morouba also dismissed the argument of religion, noting the Anti-Balakas’ many Christian as well as Muslim victims. “They meant to attack everyone,” he insisted.

The extensive Bangassou case file includes photos of the defendants in uniform bearing arms, the logbook of self-proclaimed “General” Bere Bere and minutes of a meeting with three clergymen. Evidence was provided by the UN mission in the Central African Republic, MINUSCA – a thorough investigation was carried out after four peacekeepers were killed in an attack on one of its convoys in Yongofongo on 8 May 2017 – and by human rights organizations. But it was certainly the viewing behind closed doors of film from the defendants’ cameras that convinced the court. The images included, we were told, those of a pregnant woman who was disembowelled and whose foetus was torn from her womb.

The Bangassou trial will undoubtedly mark history in the CAR for its scope, duration and organization. “Through the debates,” said prosecutor Tambo at the end of the trial, “we have seen that the Anti-balaka were not liberators, they were groups of bandits who took advantage of the absence of the State. I think this sentence will have a deterrent effect.” Morouba agrees, saying the civil parties are “satisfied with this decision”. “The Court found all the defendants guilty. The victims have understood that the Court has heard them. All the perpetrators should understand that they will one day be held accountable in court.” 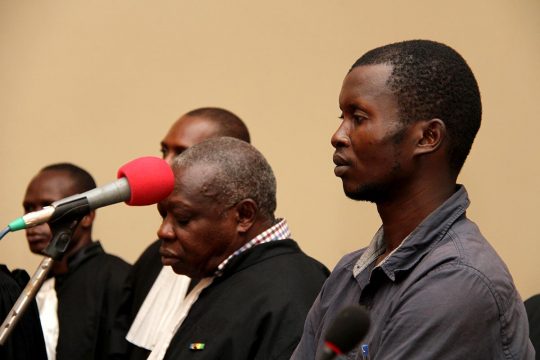 Tambo welcomes the fact that Central Africans were able to follow the trial, which was broadcast in its entirety on radio and television. But civil parties are concerned that the faces and voices of victims and witnesses were broadcast, while many of those who committed crimes in the Bangassou region have not yet laid down their arms or been arrested. For the prosecutor this is not an issue. “The Central African Criminal Procedure Code does not provide for witness and victim protection,” he says. “The suspects are on the run, they are no longer operating openly in Bangassou. Today, fear has changed sides. They are keeping a low profile.” According to Tambo, some of these fugitives will be tried in absentia at the next criminal trial.

The Special Criminal Court (SCC), whose procedural code provides for a mechanism to protect victims, did not request that the case be transferred to it, as the law would have allowed. The proceedings had been initiated before the effective implementation of the SCC, it argued. And regarding the protection of victims, according to its spokesperson Théophile Momokoama, “the SCC is not intended to replace the national authorities on these issues but the work we are doing can gradually feed the discussions and push the national authorities to integrate new practices”.

Ali Ousmane, president of the Coordination of Muslim Organisations in the Central African Republic and a victim of the events in Bangassou, believes that there are grounds for another trial, this time before the SCC. “Most of the victims have not filed a complaint and we are considering doing so before the SCC. There are perpetrators at large who retain the capacity to cause harm. They still have our property. We also want certain local or administrative authorities, who we think are accomplices, to be charged. We have evidence,” says Ousmane. “We call the acts that have occurred genocide. They wanted to exterminate all the Muslims in Bangassou.”