When Iván Duque was elected to replace Juan Manuel Santos as president of Colombia in 2018, it was seen as a further blow to the fledgling peace agreement between the Revolutionary Armed Forces of Colombia – People’s army (FARC-EP) and the Colombian government. The agreement followed lengthy negotiations and was designed to end the conflict with FARC-EP which, since the 1970s, had cost the lives of more than 220,000 Colombians and led to the forced displacement of more than seven million.

The agreement had already been defeated by the narrowest of majorities in the referendum intended to establish its legitimacy, and – although consequently amended to reflect some of the views of its opponents – the new ‘Final Agreement’ remained subject to vocal criticism, not least from former President Alvaro Uribe and his chosen candidate in the 2018 elections, Iván Duque. Since succeeding in the elections, President Duque has been clear that he intends to amend the Final Agreement and particularly the Special Jurisdiction for Peace (known by its Spanish initials as the JEP).  These criticisms – designed to shore up support among his base – are couched in populist rhetoric about protecting the rights of victims and being tough on international crimes.

Trying to impose a special Chamber for the military

One of President Duque’s first proposals after entering office was an amendment to the law to enable the introduction of a special chamber within the JEP dedicated to hearing cases against members of the armed forces. President Duque affirmed that the change was necessary to address a perceived lack of military expertise at the JEP and because – it was claimed – the military should be treated differently to members of illegal armed groups. The proposal met strong resistance from victims groups who have long stated that they do not believe a specialised military chamber can provide a  fair and unbiased tribunal for state crimes, such as the ‘false positives’.  Paradoxically, even the military did not welcome the proposal because of the uncertainty it created and ultimately the Constitutional Court rejected the amendment. However, the proposal has since been amended and is now back before Congress. While it seems unlikely that it will receive the necessary approvals, the fact that the government continues to claim that the JEP cannot properly try state crimes undermines public faith in the institution and risks affecting its ability to perform its mandate.

Perhaps the biggest threat to the JEP followed President Duque’s announcement in March this year that he objected to six out of the 159 articles in the then draft ‘Statutory Law’ that defines the JEP’s mandate and powers. The law had already been approved by both houses of Congress and the Constitutional Court. However, President Duque took the exceptional step of refusing to sign the legislation and referring it back to Congress for the houses to consider his proposed amendments. 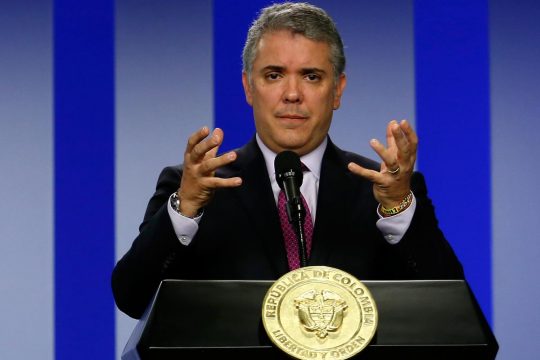 In Colombia, transitional justice is caught up in politics

The Santrich Case: Attracting as much negative publicity as possible

Two amendments were particularly significant and will be considered briefly here. The first was a proposal to change the JEP´s powers in relation to extradition requests. The Final Agreement creates a system of immunity from extradition in cases where the alleged offence was committed during the course of the conflict i.e. prior to 1 December 2016, the date on which the Final Agreement was signed.

This provision had not received much attention until the case of Seuxis Hernandez, better known as Jesus Santrich. Santrich is a former FARC-EP commander who, after acting as one of FARC-EP’s chief negotiators during the peace talks with the Colombian government in Havana, was destined to take one of the seats in Congress guaranteed for FARC-EP’s political party under the terms of the Final Agreement. Santrich was arrested in April 2018 following an extradition request from the United States for an alleged conspiracy to supply cocaine.

The procedural history of the case is strange and convoluted but the issue for the JEP was relatively simple: the Final Agreement prevents extradition for crimes committed during the course of the conflict (i.e. up until the signing of the Final Agreement on 1 December 2016). To decide if that prohibition applied in Santrich’s case the JEP needed to determine the date on which the alleged offence had been committed.  Ultimately, the JEP rejected the extradition request stating that, in spite of making repeated requests to the United States for evidence in support of the extradition request, it had not been provided with sufficient evidence to determine the date of the alleged offence. Vital evidence that had not been made available to the JEP was released to the public almost immediately after the JEP’s decision. This created a public outcry and Attorney General Nestor Humberto Martínez resigned in protest against the decision (although critics would say it was a pre-emptive move due to his alleged involvement in the Oderbrecht corruption scandal).

The Santrich case raises more questions than answers. Yet, what followed the JEP’s decision seemed designed to attract as much negative publicity as possible to what was always going to be a controversial decision. The debate was polarised between those who view FARC-EP as primarily a drug trafficking group and those who believed the extradition request was an attempt to undermine peace and sabotage FARC-EP’s political ambitions. President Duque’s objection to the provision on extradition within the draft Statutory Law capitalised on the division in public opinion.

Shortly after the JEP’s decision, Santrich defected and, along with another of FARC-EP’s principal negotiators, Iván Márquez, declared their intention to form a new armed group. Their actions have dismayed supporters of the peace process. They have also detracted from the 92% of demobilised FARC-EP who have remained engaged with the process in spite of the difficulties faced which include the killing of at least 158 former members of FARC-EP since the signing of the Final Agreement.

Selection of cases vs “impunity”

Another significant objection raised by President Duque to the draft statutory law was the provision that enables the JEP to focus on the most serious cases. The President criticised the measure for allowing impunity for perpetrators of international crimes. Although the criticism has popular appeal – nobody condones impunity for perpetrators of international crimes – it fails to recognise the realities of transitional justice. Selection and prioritisation are necessary to ensure that the most serious and representative cases are prosecuted. The approach taken by the JEP in publishing their criteria for the selection of cases follows that recommended by experts in international criminal justice as a means to ensure transparency and help victims to better understand the process.

Congress rejected the amendments proposed by President Duque and, in June 2019, President Duque finally signed the Statutory Law. The signing came as a huge relief to supporters of the JEP and averted a constitutional crisis. Since then, the Security Council has emphasised that the JEP must be “able to work independently and autonomously, with the necessary political and financial support”.

The challenge of escalating violence

Although some of the proposals to amend the jurisdiction of the JEP are still being considered, it seems increasingly unlikely that any significant changes will be made to the jurisdiction. A recent proposal to reduce the 2020 budget of the court by almost 30% has been rescinded in the face of overwhelming international pressure.

The challenge now for the JEP is likely to be ensuring continued participation of all parties but especially victims. Recent reports have noted the difficulties of ensuring the full participation of victims – particularly those in remote areas who lack the resources to access the mechanism. The assassination of at least 486 human rights defenders and social leaders (these include indigenous leaders, community representatives and political activists) since the signing of the peace agreement exacerbates this problem, creating a climate of fear in some of the areas worst affected by the conflict and where armed groups, new and old, are now fighting for territorial control. The state’s failure to prepare adequately for the demobilisation of FARC-EP, combined with a lack of political will to implement the parts of the Final Agreement designed to facilitate rural development have led to an escalation of violence and many areas feeling they are worse off than before the agreement.

President Duque has placed the JEP at the centre of his criticisms of the Final Agreement and, by trying to position himself as being on the side of victims, he has sought to gain popular support for his proposals. However, the approach does not seem to have worked. Not only has he faced a backlash from the international community, but his Centro Democrático party also suffered huge setbacks in recent local elections which saw independent candidates elected to three of the country’s major cities, including the capital. Polling shows that President Duque’s popularity ratings are historically low. An unprecedented national strike which took place on 21 November 2019 saw hundreds of thousands of people protesting against a range of issues including the government’s failure to implement the transitional justice arrangements. Smaller national protests have continued since 21 November and look set to continue into 2020.

Whether this will be enough to cause a change in government policy in relation to the peace agreement and transitional justice arrangements therein is yet to be seen. Colombia has a long history of experiences with transitional justice mechanisms – none of which have succeeded in securing lasting peace in a country where economic inequality has fuelled decades of conflict. For this attempt at peace to succeed, it will take both political will and real investment.

Rachel Rushby worked for more than ten years in London as a solicitor specialising in criminal defence. Thereafter, she lived in Colombia for five years developing an interest in transitional justice and the Colombian peace process. She volunteers with the Colombia Caravana working on issues related to the protection of human rights defenders.