“Sudan’s rulers to hand over ex-president Omar al-Bashir to the International Criminal Court on war crimes” announced the BBC as “Breaking News”. This was immediately relayed all over social media that Tuesday February 11. Taking up the story, AFP reminded that Bashir, 76, has been jailed in Khartoum since his ouster in April 2019 and is wanted by the ICC for genocide, war crimes and crimes against humanity for his role in the Darfur conflict, which broke out in 2003. Three of his former aides are also wanted by the ICC: Ahmed Harun, Abdulrahim Mohamad Hussein and Ali Kushayb. The declaration by the sovereign council member came after a government delegation met with Darfur rebel groups in the South Sudanese capital Juba, AFP added.

The sovereign council, a majority civil society body charged with overseeing the transition, is headed by General Abdel Fattah Al-Burhane. He said last year he opposed transferring to The Hague Al-Bashir, who was unseated in a palace coup just before marking three decades as Sudan’s leader. In theory, the country is now governed by a transitional administration led by Prime Minister Abdallah Hamdok, a technocrat economist who formerly worked with the United Nations.

Reuters news agency gave more detail: “The government and the rebel groups reached an agreement during a meeting in South Sudan’s capital Juba that included ‘the appearance of those who face arrest warrants before the International Criminal Court’, said Mohamed al-Hassan al-Taishi, a member of Sudan’s sovereign council.” At this stage, the sovereign council member did not mention Al-Bashir by name.  AFP also put the declaration in a context where  “the Juba talks, still ongoing, focused on justice and reconciliation in Darfur, where the United Nations says about 300,000 people have been killed and millions displaced since the conflict erupted”.

Very quickly, a Sudanese reporter for Britain’s Channel 4 contradicted the BBC’s “Breaking News”. “Fast journalism can be scarily detrimental,” commented Yousra Elbagir on Twitter. “At no point did Mohammed Hassan Eltaish - who is leading government peace talks with armed rebel groups - say that Al-Bashir will be sent to The Hague.” A few minutes later she rectified, citing a second source: “I spoke to a senior government official this morning who told me there have been two/three months of consultations over how they can cooperate with the ICC - especially after demands from armed rebel groups during peace talks that Al-Bashir be sent to face trial in The Hague.” But the government agrees that having Bashir tried outside Sudan would be too problematic. “So they are discussing ways for Al-Bashir to ‘appear’ in front of the ICC, within the country's borders,” writes the journalist.

Sudan’s Prime Minister Abdallah Hamdok confirmed the next day in a Khartoum meeting with Human Rights Watch executive director Kenneth Roth that the government wants to “cooperate with the ICC”, according to a press release from the American NGO. The communiqué also cites General Al-Burhane, who seems to have changed his mind: “General Abel Fattah al-Burhan, who chairs the Sovereign Council, told Human Rights Watch: ‘We agreed no one is above the law, and that people will be brought to justice, be it in Sudan or outside Sudan with the help of the ICC’.” Negotiations should now start with the ICC, said Human Rights Watch: “The transitional government should urgently invite ICC officials to Sudan to discuss terms of cooperation and how to move forward with the prosecutions”. It did not comment on where a trial might be held.

While nothing in the ICC’s Statute prevents it from holding trials in the country concerned, it has so far refused to do so in cases concerning the DRC, Kenya, Uganda and Libya. “Even in stable contexts, it has chosen not to”, lawyer and blogger Mark Kersten commented on Twitter.

A “lose-lose” case for the ICC

So the outcome remains uncertain in a case that has up to now been extremely costly and embarrassing for the ICC. It has been an indicator of its weakness, since no State agreed to hand Al Bashir over to the court and his case became a rallying point for African opposition to the ICC.  Because of Al Bashir, big regional power South Africa nearly pulled out of the ICC and there was friction with Jordan, the only ICC State Party in its region. They both, like other states that Al-Bashir visited, refused to arrest and hand him over. The ICC had no choice but to keep a low profile and admonish State Parties that did not cooperate, without sanctioning them. “Thus before al-Bashir’s fall from power, his indictment had developed into a lose-lose situation for the Court and its proponents,” commented international law professor Kerstin Carlson in a 2019 article published by The Conversation and Justice Info. “On the one hand, the situation that prompted the indictment – the genocide in Darfur – was ongoing and unaddressed by the court. On the other hand, any action the ICC could take against al-Bashir was politically costly, continuing to weaken an institution already under threat.” 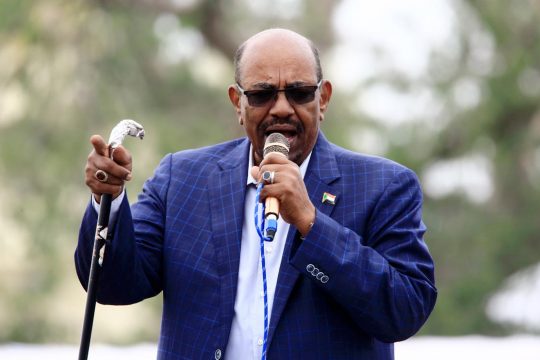 Al-Bashir and the ICC: is it worth getting your man, if you jeopardise your mission?

Speaking to Justice Info after Tuesday’s announcement by the Sudanese transitional authorities, Carlson says it is “interesting that the ICC is being considered as a tool (though not, I do not suppose, as a demonstration to any particular commitment to rule of law) in internal Sudanese politics. This shows a parallel for how other countries, notably Uganda and Congo, have partnered with the ICC for political gain while avoiding any increase in rule of law constraints for their own deeply flawed ruling regimes”. Some international criminal law analysts insist that getting Al-Bashir would be a “victory, full stop, for the institution”, but Carlson disagrees. “The situation in Darfur referred to the ICC related to genocide and other crimes committed primarily by the RSF; these are the forces that took control in June 2019 and with whom negotiations are ongoing. At this juncture, more than ever, the ICC needs to be careful not to further destroy its credibility by cooperating with the sorts of bad actors who should, by rights, be before a court themselves.”

The ICC spokesman declined to comment, saying the court was waiting for an “official confirmation”.