In February 2015, four years before he was arrested and accused of complicity in crimes against humanity, Anwar Raslan went to a police station in Berlin to file a complaint. He suspected that he was being followed, perhaps by someone from the Syrian intelligence, and wanted protection. He told the police that he might be a target, as he was a former military colonel who had defected in 2012. Little did he know then that by seeking protection he had outed himself as a potential perpetrator of 4,000 acts of torture and 58 killings.

The first trial worldwide against two alleged members of the Syrian intelligence started in the western German city of Koblenz on April 23rd. It revealed, first of all, that the investigations that led to it are as old as the war in Syria itself. In September 2011, the German Federal Prosecutor started collecting evidence about crimes committed by the Syrian regime as well as the opposition. The so called “Strukturermittlungsverfahren” (structural investigation procedure) was meant to provide a basis for future investigations against individuals. The criminal records of Raslan and his distant colleague Eyad Al-Gharib were built on that basis. Their arrests, however, were prompted by the two men themselves, who spoke a bit too openly about their past.

In the courtroom, they are seated next to each other, surrounded by translators and defence attorneys. “But at first the two cases were not connected,” says an official from the Federal Criminal Police Office (BKA), who testified on the second day of the trial. He led the investigation against Raslan that began in 2017. In March 2019, Raslan’s case and Al-Gharib’s were combined, after it had become clear that both were connected to the same department of the general secret service in Damascus: number 251, often referred to as “Al-Khatib” after the area it is located in.

Raslan was allegedly head of investigations at Department 251, where “investigation” meant forced confessions under torture and inhumane detention conditions. This would make him responsible for at least 4,000 cases of torture, 58 deaths and two cases of rape or sexual assault between 2011 and 2012, according to the German prosecutor, who brings the charges under universal jurisdiction.

Raslan, a member of the Syrian opposition…

But before torture victims and former prisoners give their testimonies to the judges in Koblenz, the first days of trial are dedicated to the hearing of German police, foreign and migration officers that tell their story of the events that have led up to the this unprecedented trial.

Unwittingly, Raslan started by filing against himself. In 2015, when turning to the German police for protection, he gave a detailed account of the violence that happened during his years at Department 251. He must have felt completely safe, not knowing that he was about to open a closed chapter of his past that would soon be used against him.

No wonder he had such trust: after all, the German authorities had invited him into the country in the first place. “He and his family entered Germany with the national programme for receiving refugees,” recounts a foreign office agent, who testified last Wednesday. In 2013, the German interior ministry decided to give out 5,000 humanitarian visas to Syrian refugees. Candidates had to apply at the UN Refugee Agency in Lebanon. However, exceptions were made for individuals already known to the German foreign representation. And Raslan was known, says the witness, not as an intelligence officer, but as a member of the Syrian opposition.

… and a peace negotiator

“The foreign office confirms Anwar Raslan’s active and visible role in the Syrian opposition,” the same witness confirmed she wrote in an e-mail in 2015 to a police officer in charge of Raslan’s case. It appears that in 2012, after deserting the General Intelligence Directorate, Raslan took his family to Jordan, where he became a prominent member of the Syrian opposition -- so prominent that he was even part of their delegation to the peace negotiations in Geneva in 2014. “There was a core negotiation team surrounded by a broader consulting team that he was part of,” says the foreign office witness. His standing in the opposition paved his way to Germany where he, his wife and five children were granted asylum in 2014.

When the BKA raided the family’s apartment during their investigations, the objects they found retraced Raslan’s unusual route: a calendar with phone numbers of high-ranking Syrian regime members, a copy of his secret service ID. There were also documents from the Syrian opposition connected to the Geneva 2 negotiations and a UN badge from 2014 with his name and picture on it.

The man who had led two completely opposite lives was finally arrested in Berlin in February 2019, a few days after his 56th birthday. 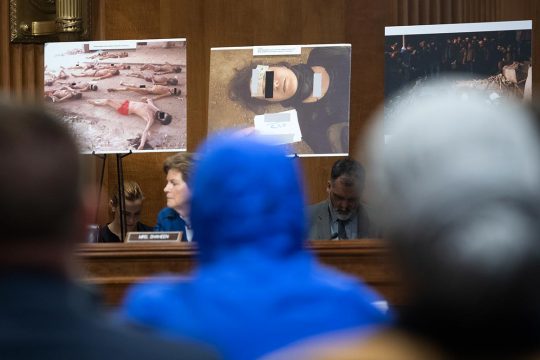 Al-Gharib exposes himself when applying for asylum

At the same time Al-Gharib, 42, was arrested in the western German state of Rhineland-Palatinate, which is why the trial is taking place in its Higher Regional Court in Koblenz. Whether or not the two knew each other is unclear. Al-Gharib was a low-ranking member of a subdivision that arrested civilians during protests or at checkpoints and brought them to Department 251. He is accused of having rounded up 30 protesters in the fall of 2011 and thereby having facilitated torture against them.

The story of his arrest is much simpler. During his asylum hearing at the Federal Office for Migration and Refugees (BAMF) he talked about his position in the Syrian intelligence directorate and what he witnessed there. “As soon as an asylum-seeker makes statements about being a victim or perpetrator in the context of Syria, this information is automatically forwarded to the BKA”, explains a federal criminal police investigator. If there is any connection to crimes against international law, the file goes to his department, as it did in the case of Al-Gharib.

The BKA then started to investigate the same way they did in Raslan’s case: they looked at satellite images of Department 251, consulted reports by human rights organizations such as Amnesty International or Human Rights Watch, and looked into the large database of official documents smuggled out of Syria by the Commission for International Justice and Accountability (CIJA). CIJA provided two documents from Department 251 dated to the period in which the crimes supposedly took place. “They were signed by Anwar Raslan,” says the BKA investigator.

The most important evidence came from questioning witnesses, about 70 altogether, he adds. Some told harrowing details of their abuse and of torture methods. The BKA asked witnesses to sketch out the interior of Department 251. Many of the details matched, and there was no shortage of torture survivors to ask. “In almost every questioning the names of further witnesses came up,” says the BKA agent. “But at some point, we just had to conclude our investigation.”

His work is done, and the trial has just begun. It could take at least a year, if not longer. Next hearings are scheduled for May 18 and 19.