On April 19, 2019, the Yundum Barracks, a military encampment 40 minutes’ drive from the Gambian capital Banjul, was the scene of unusual activity. The remains of seven soldiers summarily executed and buried in the camp on November 11, 1994, were exhumed by the Truth, Reconciliation and Reparations Commission (TRRC). In total, the Commission’s investigations had revealed that at least eleven soldiers were executed on that day at different times and places.

As an excavator truck dug, family members sobbed. In their midst was Abdul Aziz Barrow. He is the son of Lieutenant Basiru Barrow, one of the soldiers executed. He was barely a year old when his father was murdered. Now he was 26. “When I first arrived at the scene of excavation, for some reason, I felt empty on the inside. Empty in the sense that I saw the remains of seven people and one among them could have been the dad I never knew,” he said. “The dad I yearned for the companionship when I was but a toddler.”

The victims’ frustrating wait for answers

In November 1994, Lieutenant Barrow and his colleagues were accused of planning to topple Yahya Jammeh, who had taken power through a military coup barely four months earlier. Jammeh’s onetime close friend and then Minister of Defence Edward Singhatey confirmed to the Truth Commission that the order to kill them came from Jammeh. It was Sanna Sabally, the junta’s vice-president at the time, who led the mission that would eventually cost the lives of eleven soldiers for their alleged plot. According to testimonies before the TRRC, the soldiers were lined up with their hands tied behind them and shot point blank.

It took the exhumation team of the TRRC almost a week to find some of the remains at the Yundum Barracks. Seven ropes reportedly used to tie the victims were found in the mass grave where the seven remains were found, corroborating the testimonies heard by the Commission. “I couldn't cry and I remained calm for the simple reason that I didn't even know how I should have felt,” said Aziz Barrow.

It has been over a year since the TRRC made its first successful exhumation. No other remains were uncovered and the identity of those that were found are yet to be established. For the family members, it is a source of frustration. “I feel frustrated not just because of having to wait too long but for the simple fact that the TRRC never reached out to update us on the latest developments regarding the remains of our loved ones,” said Aziz Barrow.

He is not the only one complaining about the slow pace. “We have waited for over 20 years and now, after exhumations, we had to wait for over a year again. That is a difficult thing,” said Mamudou Sillah, a younger brother of Cadet Amadou Sillah, one of the soldiers believed to be among the exhumed remains. “When you bury the remains, you can put the past behind you, but without that, how can you?” Sillah asked.

The identification process for the remains is underway, assured the Commission. But the remains, in custody of the coroner’s office at Gambia’s main hospital in Banjul, are yet to be subjected to DNA test and the Commission relies entirely on outside expertise for DNA testing.

“It is unclear how the current pandemic will affect the search and identification work in this regard but I would call on the TRRC to discuss their plans with the families of those forcibly disappeared and to have them at the centre of this process,” said Nana-Jo Ndow, the Executive Director of African Network against Extrajudicial Killings and Enforced Disappearances (ANEKED), an NGO. “It is crucial to increase the line of communication with families affected to set expectations and ensure they are not left in the dark as they await forensic results,” she said.

Nana-Jo Ndow is herself a victim. Her father Saul Ndow disappeared in Gambia in April 2013 when she was 27. Saul Ndow, a father of five, was a critic of Jammeh. He disappeared alongside a Gambian lawmaker for Jammeh’s Alliance for Patriotic Reorientation and Construction Party, Mahawa Cham. A former hitman under Jammeh’s regime, Nuha Badgie, has confessed before the TRRC to participating in Ndow’s murder.

Earlier this year, Nana-Jo Ndow directed a documentary film, “I Cannot Bury My Father”, featuring Ghanaian families whose relatives were allegedly killed in Gambia in 2005. The 54 West African migrants who were reportedly travelling to Europe were captured and executed, on the orders of former president Yahya Jammeh, according to the testimonies of two of Jammeh’s hitmen, Omar Jallow and Malick Jatta, who participated in the executions.

In 2019, another member of Jammeh’s hit squad, Amadou Badgie, admitted participating into the disappearance of two Americans, Ebou Jobe and Mamut Ceesay, in 2013. According to the TRRC, the United States has offered assistance in the investigations. “The government has since visited the suspected burial sites of the missing individuals and efforts are underway to continue work on these sites,” the TRRC said in an interim report published on April 29.

Thanks to testimonies of dozens of witnesses appearing before the TRRC, some of the unmarked graves where the disappeared may be found are being located. The Commission has estimated that it may help find at least one hundred individuals. It has so far identified six suspected burial sites in Kanilai, Jammeh’s home village, Yundum Barracks, Siffoe, Jambur, Baboon Island and Barra. Now on its second and possibly final year of operation, “the TRRC will therefore focus on searching for these burial sites and recovering the remains in order to positively identify who they are and returning them to their families,” said the interim report.

It would be Gambia’s first attempt to conduct mass exhumations. In 2017, two separate exhumations were carried out by the Gambia police leading to identification of the remains of four individuals killed in 2014 and 2016. In 2018 Justice Rapid Response, an intergovernmental mechanism, with financial support from Canada, helped identify victims and determine causes of death. Three of those exhumed were soldiers who lost their lives in an attempt to topple Jammeh on December 30, 2014. The fourth one was Solo Sandeng, an opposition leader who died in state custody on April 15, 2016, a day after he was picked up at a protest. (In January 2019, Gambia’s Justice Ministry handed over to the families the remains of the three soldiers; however, the remains of Sandeng are in the custody of the courts as seven of his alleged killers are standing trial for his murder.) 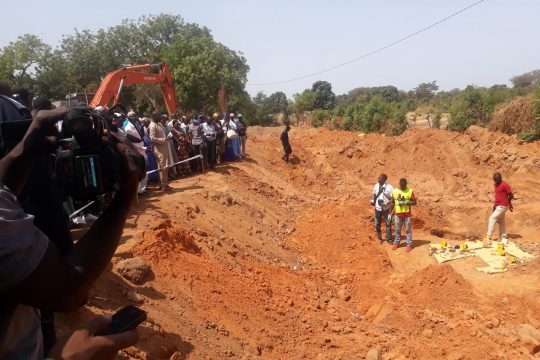 Gambia unearths its past

Lack of expertise and equipment

The TRRC has to entirely rely on eye witness testimonies to identify the mass graves. For instance, the Commission was told that more people may be buried at the Yundum Barracks. However, there is no consensus on where these mass graves may be. “One of the areas identified to be a burial site has a building sitting on top of it,” said the Commission in its interim report.

There is also a capacity challenge. The TRRC has only one forensic archaeologist. Other members of its team have ancillary trainings. The exhumations could take a lot of time to be completed, the Commission’s executive secretary Dr Baba Galleh Jallow told Justice Info.

“We are still constrained both in terms of expertise and equipment,” added Essa Jallow, the Commission’s director of communication. “In order to ensure an efficient exhumation process in a more professional and timely manner, the TRRC would need the services of more experts such as a forensic anthropologist, and a ballistics expert because some of the victims in most of the cases we will be dealing with are believed to have died from gunshot wounds. We also need to have a ground-penetrating radar to save time and resources in the search process.”

More wait for the victims

Justice Minister Abubacarr Tambadou said his ministry is looking for funding to ensure the Commission brings remains of the disappeared back to their families. In Nana-Jo Ndow’s view, “it will be necessary to coordinate with international forensic specialists, as done in 2018, to ensure that the remains exhumed are promptly identified and returned to families and avoid delays.”

Even then, Essa Jallow already warned that the TRRC would not be able to fulfil a task that is part of its mandate. “We will not be able to test for the presence of human remains in all the sites identified by the commission within the two year mandate," he said.

Meanwhile Aziz Barrow and hundreds of other relatives of the disappeared will have to wait. “The idea of him [Lieutenant Basiru Barrow] finally laying to rest is all we yearn for and the sooner it is done, the better,” Aziz Barrow said. “It will also bring a sense of finality to all the misery and emotional turmoil we have been going through as a family since 1994.”