Nothing happened on 31 August in the al-Salam camp in Darfur. No cries of joy, no cries of relief, no jubilation, not even clenched fists. On that day, however, peace agreements were initialled for Darfur, as well as for South Kordofan and Blue Nile. The Darfur deal concerns first and foremost the al-Salam IDPs, and is supposed to end the conflict in which they have lost loved ones and property, bringing them “peace, justice and compensation”. After more than ten months, talks between the Sudanese transitional authorities and the Sudanese Revolutionary Front (SFR) — a coalition of six rebel alliances from Darfur, South Kordofan and Blue Nile — have finally come to a successful conclusion. The term “historic” is not too strong. The agreements initialled in Juba put an end to nearly two decades of conflict, laying the foundation for a new Sudan to emerge from the revolution of December 2018.

“It’s all very nice, but it won’t have any effect on the ground or on us,” predicts one young man from al-Salam. “The armed groups have negotiated only for positions and privileges.” He asked to remain anonymous. According to him, one of the rebel movements that signed the Juba accords, the SLM/A Mnini Minawi, is still trying to recruit young people in the camp, offering them money and weapons. Telling this can bring reprisals.

From the al-Salam IDP camp near the North Darfur capital Al-Fashir to the big South Darfur town of Nyala, people we contacted were not convinced. Certainly, there is general approval for the eight protocols making up the accord: security, land ownership, transitional justice, reparations and compensation, development of the nomadic and pastoral sector, wealth sharing, power sharing, and the return of refugees and displaced persons. “Both parties agree that strengthening reconciliation in Darfur is one of the ultimate objectives of this agreement,” says the text initialled in Juba. It aims to do this by “addressing the root causes of conflict and strengthening measures to reduce them, supporting mechanisms and operations that aim to facilitate reconciliation and rebuild social harmony. Both parties recognize that the marginalization of the people of Darfur is one of the main reasons for these conflicts.”

But the sincerity of the parties remains a major unknown – and the people we spoke to in Al-Fashir and Nyala recall that two armed movements, one from South Kordofan, the other from Darfur, have refused to sign.

Lawyer Suliman Baldo, advisor to the NGO Enough Project, sums up the prevailing mood: “All the principles of transitional justice are in the text. But we have the experience of several previous agreements [in 2006 and 2011, under the presidency of Al-Bashir]. The principles, the intentions, the proposals for institutions were impeccable, for the recognition of the displaced and war victims, the right to return to their lands, the right to compensation and reparation, the principle of an end to impunity for the Sudanese defence and security forces. But on the ground, nothing changed. Let’s hope that this time there will be more serious implementation and follow-up.”

The Sudanese transitional government, which emerged from the December 2018 revolution that overthrew the military-Islamist regime of former President Omar Al-Bashir, has made peace the cornerstone of its policies and a prerequisite for reform. “All the government’s programmes are based on peace, and if peace is not achieved, none of the transitional government’s programmes will be carried out,” government spokesman Faysal Mohamed Saleh told the press at the end of August.

This shows the importance of the ceremonies for the final signing of the agreement, scheduled for October 3 in Juba. The difficult negotiations lasted more than ten months and concerned two major conflicts that ravaged peripheral and marginalized regions of Sudan. The conflict in Darfur, which erupted in 2003, left more than 300,000 people dead along with 2.5 million displaced persons and refugees, according to UN estimates. The war in the Nuba Mountains in the southern state of Kordofan and Blue Nile, on the border with South Sudan, is a continuation of the war that pitted Khartoum against the southern Sudanese People’s Liberation Army (SLPA/M) until 2005. Forgotten by the 2005 peace, refusing to remain in the bosom of the North, the fighters of the Nuba Mountains took up arms again in 2011.

Weapons had to be silenced, but also, it was said in Khartoum, the root causes had to be addressed. Today, both the government and the armed groups boast of having reached a comprehensive peace deal that addresses all the problems.  These include the “fair distribution” of power and wealth, the resolution of land disputes, the protection of religious freedom, and transitional justice. “Bodies such as a commission for displaced persons and refugees, a truth and reconciliation commission, and a compensation and reparations fund are planned,” Baldo explains. “But there are no details about who will be responsible for establishing these bodies, or how they will be funded. This is a bit too imprecise for my liking.”

Prime Minister Abdullah Hamdok has made it clear that this peace agreement is only a first step on a “long and difficult” path. “It’s a list of principles, such as ‘we must facilitate access to land and education’, or ‘compensate for the losses suffered by displaced persons and refugees’, but there is no mechanism,” says Mohamed Suliman Khatir, a jurist in international law from Nyala in Darfur. “When you look at how all this is going to be implemented, there is nothing!”

The text of the agreement states that “in order to punish individuals who have committed crimes related to the conflict (…) traditional justice mechanisms are competent to try crimes that would not fall within the jurisdiction of the International Criminal Court, the Special Court for Darfur, the national justice system or the Truth and Reconciliation Commission”. This is not enough for Baldo, who believes that existing traditional justice mechanisms in Darfur should be used to establish the Truth and Reconciliation Commission and decide on compensation and reparations: “These mechanisms for conflict management and prevention are very well codified, they have existed for centuries and are still in use today,” he explains. “They are tribal conferences that meet during serious incidents between two communities, under the authority of neutral mediators accepted by both parties. We must build on them, with an adaptation of international practices of interest to Sudan.” He evokes the experience of the Equity and Reconciliation Commission in Morocco: “Like Sudan, Morocco is a traditional and Muslim country. However, it has accepted two practices banned by Islam: exhumation and the principle of equal compensation without gender difference. It has instituted human rights training in school curricula and police academies. It also practiced ‘lustration’ and eliminated from the ranks of the security agencies people directly involved in the persecution of civilians.”

A problem in the Sudanese case is that the head of the negotiations was none other than Mohammed Hamdane Dagolo, alias Hemetti, number 2 of the Sovereign Council (transitional joint leadership) and leader of the Rapid Support Forces paramilitary unit which under Omar al-Bashir integrated the former Janjaweed deemed responsible for numerous abuses. The fact that Hemetti acknowledged “errors” in his speech after the signing in Juba does little to satisfy the displaced in al-Salam camp or the refugees in Chad. They are also angry at the presence of General Abdel Fattah al-Burhan, who currently presides over the supreme organ of the transition. He too is accused of serious crimes in Darfur.

“If the communities don’t join in, it won’t work”

However, the Juba agreement provides for a judicial component. Those who have committed “violations of human rights and international humanitarian law [will] be prosecuted, according to the jurisdiction of national or international courts or the Darfur Special Court,” says the agreement. “National courts will refer crimes outside their jurisdiction to specialized judicial mechanisms, which are the Special Court for Darfur, traditional justice mechanisms and the Truth and Reconciliation Commission.” But it’s not clear how this will work, in addition to the fact that commanders of armed groups obtained amnesties during the negotiations. “If some of them have committed war crimes, they must be prosecuted!” Baldo exclaims. “This impunity is unacceptable!”

“We can’t trust them,” says our young man from the al-Salam camp. All the more since, according to Mohamed Suliman Khatir, the populations primarily concerned were not consulted. “The negotiators did not even go to the zones concerned,” he says. “But we overthrew the regime of Omar al-Bashir, we are supposed to be in a democracy and not apply the old top-down methods without consultation. If the communities don’t join in, it won’t work.”

DARFUR ACCORD: EXTRACTS FROM THE TRANSITIONAL JUSTICE CHAPTER

Adopt transitional justice mechanisms as tools to deliver justice for victims and prosecute perpetrators of violence committed during the conflicts in Darfur.

Work for national and international justice for crimes of genocide, crimes against humanity and war crimes.

Recognize that the quest for justice excludes any possibility of amnesty or protection for perpetrators of genocide, crimes against humanity and war crimes.

Creation of a Truth and Reconciliation Commission

The two parties agree to set up a Truth and Reconciliation Commission within 60 (sixty) days from the date of its creation.

Powers are granted to traditional justice mechanisms to punish individuals who have committed crimes related to the conflict within communities or between communities. The traditional justice mechanisms have jurisdiction for crimes linked to the conflict which do not fall under the jurisdiction of the International Criminal Court, the Special Tribunal for Darfur, the national  judicial system or the Truth and Reconciliation Commission.

The parties agree to establish a Special Court to try crimes that took place in Darfur within 90 (ninety) days from the date of the signing of this agreement. This court shall serve for 10 (ten) years from the date of its establishment, unless the court completes its work before the end of that period.

The government undertakes to grant a general amnesty to leaders and members of armed groups for any convictions and prosecutions based solely on their being members of these movements, following a legal review by the relevant institutions as soon as the peace agreement is signed. 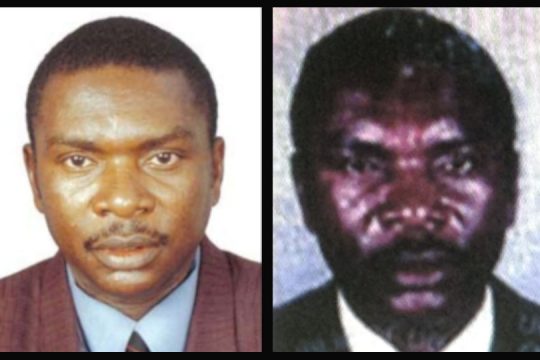