The Special Criminal Court (SCC), created by a law of June 2015 to try grave violations of human rights and international humanitarian law committed since 2003, has not yet opened any trials, and the greatest secrecy surrounds its investigations. All that is known is that suspects have been arrested at its request. “There are, to date, about 15 people in pre-trial detention,” says SCC spokesman Théophile Momokoama. “These are primarily those arrested in the Lemouna, Koundjil, Bohong, Ndélé, and Obo incidents. They are being held in pre-trial detention in the Ngaragba prison house and its annexes at Camp de Roux. Some have been held since May 2020, others since July 2020.” But other sources in Bangui speak of about 20 detainees (see box). Neither their exact number nor their names are known. This is an unprecedented situation at a UN-backed court.

The court refuses to disclose the identity of its detainees, arguing insecurity in the country, most of which is under the control of armed groups. Amnesty International is concerned about this choice as it prepares to publish a report on justice in the Central African Republic (CAR). “Amnesty International has no more information than the general public about those detained on behalf of the SCC. This is the first time that an international or a hybrid court has operated with so little transparency,” says Alice Banens, legal advisor to the human rights NGO.

“It’s not normal!” exclaims lawyer and former prime minister of CAR Nicolas Tiangaye. Nothing, according to him, justifies such opacity. “Secrecy is for the content of the investigations, not the identity of those being prosecuted. We can understand secrecy for the witnesses but not for the accused,” he says. Tiangaye, who also served as defence counsel at the International Criminal Tribunal for Rwanda, sees this as a violation of the open court principle. “Unbelievable, absolutely strange!” agrees French lawyer Vincent Courcelle-Labrousse, who is used to working for international tribunals. “This means that people are being held secretly!”

Théophile Momokoama wishes to reassure. “All these people are assisted by lawyers, in some cases appointed by the Court among the lawyers registered at the Central African Bar Association. They are visited by members of their families,” he says. “The context for the SCC is not the same as for many such jurisdictions. The conflict continues in the Central African Republic, the warlords who are potentially targeted for prosecution are still in control of entire swathes of the national territory and they retain a capacity for harm that the court cannot ignore. This is why, at the current stage of the proceedings, the identity of the suspects is not revealed. On the other hand, their lawyers interact with the investigation offices and the special prosecutor’s office in a fluid manner, guaranteeing all rights.”

To justify keeping the identity of these detainees secret, Momokoama invokes Article 71 of the Court’s Rules of Procedure and Evidence. The latter stipulates that “all persons participating in the investigation proceedings shall be bound by professional secrecy”. Other provisions of the rules emphasize the protection of witnesses and victims, and even court staff, but nowhere does it mention unequivocally non-disclosure of suspects’ identity. 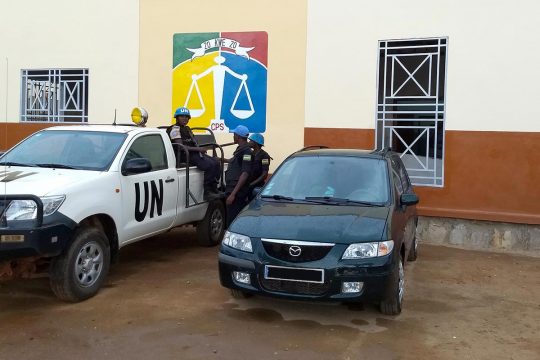 According Justice Info’s investigations, a first three individuals were detained after the national justice system handed over to the SCC the case of massacres at Kundjili and Limouna, committed in July 2019 by members of the 3R movement in the Paoua region. A second group of detainees followed, consisting of nine individuals, including Azor Kalité, a former member of the Central African Armed Forces (FACA) who joined the Seleka, an armed rebel coalition that briefly seized power in 2013. Kalité, it seems, is being prosecuted for the April 29, 2020 attack on the northeastern town of Ndélé, in which about 20 people were killed and several others wounded. When Justice Info last week visited the high-security prison in Roux camp, rehabilitated and guarded by peacekeepers from Burkina Faso, the man appeared to be in good health. He assured us that the detention conditions were good and that he was receiving visits from family members, sometimes bringing him food. The only problem was legal assistance. The lawyer who had been assigned to him, he said, left the Bar after finding a job with an NGO. The family then chose two other lawyers, but they have not yet met with the detainee.

A third group of nine individuals includes people identified as members of the Union for Peace in the Central African Republic (UPC), one of the armed groups still active. They were arrested following an attack last May on the town of Obo, located in the far southeast of the country. Contacted by Justice Info, however, the UPC’s General Staff asserts that they are not its combatants, but rather merchants, shepherds, artisans, and motorcycle cab drivers. The UPC says investigations will prove that the SCC made a mistake in this case. Human rights sources in Bangui say it is possible that some of the SCC’s pre-trial detainees may be released for lack of evidence.

Also said to be on the list is “General” Zakaria Mahamat, considered the number 2 of the UPC. His arrest was announced in early September by the prosecutor of Bangui Court of Appeal, Eric Didier Tambo, although he did not say whether the suspect was wanted by the SCC or by other courts in the country. Mahamat is suspected of having played a role in the August 14 kidnapping of two surveyors, six vaccination programme workers, a doctor, and a member of parliament in the town of Mboki in Haut-Mbomou prefecture (southeastern CAR).

Momokoama asserts that “given the progress of certain cases”, the identity of the detainees will be made public “when the time is right”. According to him, “the first trials were planned for the end of this year or beginning of next year, but the Covid-19 pandemic and resulting restrictions have significantly impacted the pace of work in terms of deploying investigation teams and hearing witnesses and victims. At best, the first trials could take place in the first quarter of 2021, if not a little later.” While he understands the impatience of Central Africans, he rejects the accusations of slowness often made against the SCC. “In fact, there was no delay in starting investigations, which began in January 2019. Compared to similar jurisdictions responsible for prosecuting and judging the perpetrators of international crimes (genocide, war crimes and crimes against humanity), the SCC is moving forward at a good pace.”

In fact, with the exception of the International Criminal Court and the Special Tribunal for Lebanon, all contemporary international or mixed tribunals opened their first trials within five years of their creation.

According to our count, as many as 22 people have been held in pre-trial detention by the Special Criminal Court since mid-2019, without their identities being disclosed. This goes against the common principle of open justice.

Some of those arrested by the SCC were later released or had their cases transferred to the ordinary courts. While the SCC was created after the 2013-2014 civil war to try the perpetrators of the most serious crimes committed since January 1, 2003, none of these arrests appear to relate to events prior to 2019.

Central African Republic: The Truth Commission with feet of clay

Why in the Central African Republic, Reparations Should Come First
Most read