Yesterday’s surrender of the president of the small independent republic of Kosovo marks a crucial moment in the process of prosecuting war crimes committed by ethnic Albanians during and after the country’s conflict at the end of the 1990s.

“I was informed by competent authorities that the pre-trial judge of the Specialist Chambers has officially confirmed the indictment against me,” Hashim Thaçi said soberly at an impromptu press conference in Pristina, on November 5. “These are not easy moments for me and my family, and for those who have supported and believed in me in the past three decades of our struggle for freedom, independence and nation-building,” he said in his address.

A few hours later, the exact charges against him were published by the Kosovo Specialist Chambers (KSC), a hybrid tribunal based in The Netherlands (read our box).

“No decision will change our history”

Thaçi played a key role in Kosovo during its nation-building period, starting from the conflict and throughout the UN-administered protectorate period, and following its declaration of independence in 2008. He was one of the founders of the Kosovo Liberation Army (KLA), a guerilla movement composed of ethnic Albanians from Kosovo who confronted the forces of the Serb-dominated Yugoslav Army and Serbian police and paramilitary units, known for their harsh treatment and massacres against the Albanian civilian population. Later, when the force became more established, Thaçi became its political representative.

“We are freedom-loving and not a vengeful nation. Therefore, no decision will change our history. Kosovo was a victim, Serbia was the aggressor. This new situation is a new opportunity for Kosovo, we have to turn it into an advantage for the present and future of Kosovo,” Thaçi concluded.

After a damaging leak of documents and a first series of arrests in September, the president's surrender is the culmination of a new round of arrests this week, which marks the resounding start of a specialized tribunal whose mandate focuses on the abuses committed by members of the KLA.

Three other KLA figures left for the Hague this week. On Wednesday morning, European Union (EU) police in collaboration with local forces raided the house of Jakup Krasniqi, a former KLA member and ex-speaker of parliament. Following his arrest, he was transported to the Hague detention center to await trial.

Then it was Kadri Veseli, who belongs to the same political party as Thaçi and was known as his personal spy chief during the years immediately following the war. He chose to surrender willingly on Thursday morning after also receiving news of being named in the same indictment. Their party, the Democratic Party of Kosovo or PDK is the political continuation of the KLA. PDK derived most of its credibility in the post-war period from the KLA’s alleged role in ending the conflict in Kosovo.

The third person to surrender, Rexhep Selimi, was also a KLA member but spent the last couple of years as part of the country’s main opposition party. Thaçi, Veseli and Selimi left Kosovo for the Hague in a military plane that departed from a NATO-controlled airport on the outskirts of the capital, Pristina. 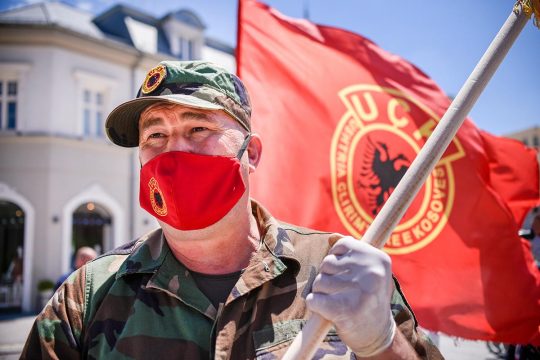 Reactions in Kosovo have been muted, owing partly to the ongoing pandemic but mainly due to Thaçi’s tarnished image over the years. While he might have once enjoyed strong support among the population, his involvement in corrupt affairs over the years has led to many resenting his constant presence in the political scene in the country.

During the war, his role as the political representative of the KLA earned him a seat at the negotiating table in Rambouillet when representatives of Kosovo Albanians met with the political leaders of Serbia. After the war, his political influence waned, with Thaçi leading the Democratic Party of Kosovo from the opposition during the UN-administered protectorate period. His party came out first in the national elections in 2007, paving the way for him to become prime minister, foreign minister, and president of the country in the following years.

On February 17, 2008, Thaçi himself read the declaration of Kosovo's independence. Analysts fear that if he is declared guilty, the detractors of Kosovo’s independence – such as Russia and China – will use that to diminish the country’s legitimacy.

“It is important to separate the genuine right of Kosovo citizens to live in an independent country, which was fulfilled in 2008, with the crimes committed by members of the KLA during and after the conflict,” says Bekim Blakaj, the head of the Humanitarian Law Center Kosovo. “In fact, Thaçi has often tried to represent charges against him as charges being drawn against Kosovo, the country. This is not true,” he explains.

The international community often involved Thaçi in the main international processes, such as the EU-facilitated dialogue with Serbia. The start of the dialogue with Serbia in 2011 was seen as a major breakthrough in bringing the former foes closer to normal cooperation. Thaçi was applauded for representing the Kosovo and being open to compromise. However, in the same year, Council of Europe rapporteur Dick Marty published a report accusing Thaçi of war crimes in the country.

Marty's report stated that the "Drenica Group", of which Thaçi was a member, carried out organ trafficking during the conflict. The report also says that Thaçi and others knew of or committed acts of kidnapping, torture and participated in the murder of civilians. Shortly afterwards, the Parliamentary Assembly of the Council of Europe adopted a resolution calling for an investigation into the crimes alleged to have been committed by Thaçi and others.

Thaçi, a promoter of the Specialist Chambers

Initially decrying the Marty report as a result of anti-Kosovo propaganda, Thaçi became the main impetus behind the formation of the court that stripped him of his position today. Trying to paint it as a show of goodwill and proof that the KLA had nothing to hide, Thaçi used his influence in the parliament to achieve a majority needed to amend the constitution.

Constitutional amendments were necessary since the chambers are a de-facto Kosovo national court – they operate under Kosovo law and include all legal instances foreseen by the Kosovo judicial system, while being entirely financed by the EU and staffed by international judges and prosecutors to avoid instances of witness intimidation and possible political interference.

However, once all the procedures had been completed and the Chambers became functional, Thaçi changed his position and became active in the attempts to repeal it. In the past year, he made three separate attempts to revise the Kosovo constitution and nullify the existence of the court.

Ramush Haradinaj, whose Alliance for the Future of Kosovo is part of the government coalition, called for the dialogue with Serbia to be suspended, following Thaçi’s announcement on Thursday. Haradinaj was also a member of the KLA. He was charged and acquitted twice, by the International Tribunal for the former Yugoslavia, for war crimes and crimes against humanity.

With today’s announcement and Thaçi’s departure for the Hague, what was seen as the biggest hurdle of the Kosovo Specialist Chambers has been overcome. Now, the key challenge for the chambers is whether the burden of evidence will be enough to convict Thaçi and others, closing the final chapter of war crimes stemming from the breakup of the former Yugoslavia and its immediate aftermath.

THE INDICTMENT: “A JOINT CRIMINAL ENTERPRISE” AGAINST KOSOVO CIVILIANS

Once président Thaçi and the other indictees were confirmed to have arrived at the Hague, the Kosovo Specialist Chambers published a redacted version of the common indictment against Hashim Thaçi, Kadri Veseli, Jakup Krasniqi and Rexhep Selimi on its website. They are accused of having “carried out a widespread or systematic attack against the civilian population… in Kosovo and areas of northern Albania, from at least March 1998 through September 1999” when they were active members of the Kosovo Liberation Army.

The indictment places most of the alleged crimes of the four indictees (labeled as “the JCE members and tools”) under the umbrella of “joint criminal enterprise” (JCE) - a legal concept applied to prosecute members of a group for the actions of the entire group when a common plan or purpose is established.

“The crimes followed a consistent pattern, impacted the victims’ wider families and communities, and were intended to serve as a warning and to exert pressure on the targeted population as a whole, deterring opposition to, and enforcing absolute unity behind, the KLA. The JCE members and tools knew of the attack and their conduct formed part of it.”

Crucially, the indictment specifies that the victims were not members of the Serb-dominated Yugoslav National Army, the Serbian police, and paramilitary units. “The victims were persons taking no active part in hostilities. The JCE members and tools were aware of the factual circumstances establishing the existence of the armed conflict and the status of the victims.”

Former Kosovo president Hashim Thaçi is specifically charged for the following: 1) formulating or participating in the implementation of the plans of the common purpose, 2) participating and encouraging the crimes in the furtherance of the common purpose, 3) disseminating or promoting information to advocate the common purpose and “engender fear, distrust, and hatred of Opponents,” 4) providing the international community, monitors and the public with false, incomplete or misleading information “relating to the criminal activities of the JCE members,” 5) appointing and promoting JCE members, including those with a history of involvement in serious crimes, and 6) providing and facilitating military, logistical and financial support.

All indictees are charged with failing to take the necessary and reasonable measures to prevent the commission of the crimes charged in this indictment, and to punish the perpetrators thereof.