From the ravaging of Afghanistan's forests to the damage inflicted on Ukraine’s protected areas to the decimation of wildlife across the Democratic Republic of Congo, armed conflicts continue to have a devastating impact on biodiversity worldwide. Biodiversity hotspots — the world’s most species-rich yet threatened areas — cover only 2.4% of Earth’s land surface, but overlap strikingly with locations of armed conflicts historically. Between 1950 and 2000, over 90% of major armed conflicts with more than 1,000 casualties occurred in countries containing biodiversity hotspots; more than 80% of these conflicts took place directly within hotspots.

Armed conflict harms biodiversity in numerous ways: degrading forests, land, and natural resources; accelerating species loss; and impeding conservation efforts or research. The weakening or collapse of governance and easy access to weapons can facilitate poaching and the illegal wildlife trade, while civilian coping strategies and the effect of conflict-displaced peoples in need of basic sustenance can lead to the overexploitation of natural resources.

Although this toll is increasingly recognized, there is no special legal protection for biodiversity under international humanitarian law, which regulates how armed conflict is waged and lays out protections in order to limit its consequences. To date, most efforts to conserve biodiversity have focused on times of peace. Because key international biodiversity treaties, like the Convention on Biological Diversity and the Ramsar Convention, only apply in times of peace, important biodiversity areas — from hotspots to protected areas to indigenous territories — lack special legal protection during armed conflict.

As the global biodiversity crisis worsens, recognition is growing of the importance of protecting biodiversity from the ravages of armed conflict. But little is known about how to do this, as most related research has focused solely on impacts to wildlife. (For example, in the vast Sahara-Sahel region, the escalation of armed conflicts over the last decade has driven dramatic declines of endangered local species; 12 of 14 large-sized vertebrates found in the region, such as Saharan cheetahs, Addax and Dama Gazelle, are now listed as “Extinct in the Wild” or globally threatened with extinction.)

In recent years, these legal gaps have received increasing attention from the international community. The most significant development to date is the UN International Law Commission’s (ILC) work to strengthen environmental protection before, during, and after armed conflict and during occupation. Given the ILC’s mandate to codify and progressively develop international law, their adoption last year of twenty-eight Draft Principles are considered a starting point for the incremental shaping and developing of law in this area.

The Draft Principles include designating areas of major environmental importance as “protected zones” off limits for fighting and protected against any attack during armed conflict — as long as it does not contain a military objective. Given the legal gap for biodiversity, many experts consider such area-based protection a potentially important tool.

Pantazopoulos considers the ILC’s use of “protected zones” — which share similarities with the concept of “demilitarized zones“ in international humanitarian law— progressive. “I see this as an appeal to conservationists through familiar terminology, it’s not just the domain of military officials anymore.” Also positive, Pantazopoulos adds, is the International Committee of the Red Cross including a similar recommendation to protect areas of ecological importance in their recently updated Guidelines on the Protection of the Natural Environment in Armed Conflict. “They know the existing provisions are not sufficient and we need area-based protection.”

José Carlos Brito, a principal researcher at the University of Porto with extensive conservation experience in the Sahara-Sahel, welcomes the Draft Principles as a positive step forward, but says the requirement to designate “protected zones” unnecessarily complicates things, and recommends the World Database on Protected Areas “be taken as a direct baseline for the protected zones.” Giving blanket protection to all existing protected areas in the database would simplify the process, as states would not need to determine and designate which areas are worthy of further protection or not. 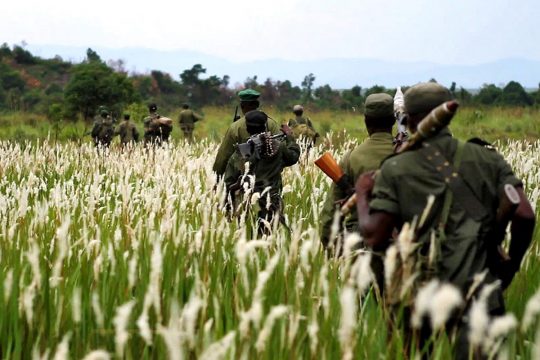 The “militarization of conservation”

But while designating an area as a protected zone is one thing, implementing and upholding protection during armed conflict is another. Whether the good intent of the Draft Principles can translate into real protection on the ground hinges on if the commitment required is there, says Brito. “Parties may be strictly focused on the achievement of the military objectives and the protection of the environment ‘forgotten.’”

Then there are the risks, which experts argue merit further scrutiny.

Some experts are concerned area-based conservation could lead to the “militarization of conservation”— deploying militarized techniques in order to protect the protected zones — which has come under increased criticism in recent years, after evidence emerged of human rights abuses committed in the name of conservation across six countries in Africa and Asia. The debate surrounding it is “very legitimate and very divisive in the conservation world,” says Elaine Hsiao, research fellow at the UK’s Sheffield Institute for International Development. “Conservation is still struggling to find that non-violent alternative they need that can make it successful in the long-run.”

Many conservationists are against militarized approaches; others, like Brito, reluctantly accept that, however imperfect, the circumstances necessitate them. “Although as a baseline I reject any form of armed solution…under the context of armed conflict it's almost impossible to ensure environmental protection without some sort of militarization.”

The missing voice of local communities

A related concern is that area-based protection could lead to “fortress conservation” — an approach rooted in the belief that ecosystems function best in isolation from humans — which has been critiqued for vilifying and excluding local and indigenous communities who sustainably managed and protected their natural environments long-before modern conservation existed.

Because the Draft Principles are designed to address challenges at the State-level they do not include non-State actors, like local communities or indigenous peoples, as parties to an agreement. This is a common issue and just one of the challenges of addressing these kinds of situations through international law, explains Hsiao. “You’re trying to take a localized context with actors on the ground and create a high-level law that’s supposed to apply. Sometimes, it’s like law-making at the wrong level.”

Hsiao thinks the hyper-focus on protected areas averts attention from where it might be more important: indigenous territories and community-conserved areas, which are essential to conservation because of how much land they encompass. “I don’t think the Draft Principles provide strong enough or appropriately framed protection for those kinds of spaces.”

The limits of sensitization

Since biodiversity protection comes down to the responsibility of the actors of the armed conflict, environmental education is critical, says Brito. “Those engaged in military action need to understand the intrinsic value that ecosystem services provide to humankind.”

Accordingly, Hsiao thinks conservationists need to be trained in negotiation and conflict transformation with armed actors. Some work is being done to sensitize militaries around how to protect the environment in times of armed conflict, but when it comes to non-State actors, she explains, engagement often happens ad-hoc and is not spoken of openly because “it’s not seen positively that you’d engage with armed actors, especially non-State armed groups.”

Involving the arms industry by introducing a compensation mechanism for environmental protection — similar to those used in relation to natural resource extraction— could be a novel way to hold the arms industry accountable for the damage caused by the goods they produce, says Brito.

It remains to be seen whether legal efforts can actually enhance protection on the ground. But with biodiversity in free fall globally, declining faster than at any other moment in human history, reducing armed conflict’s toll on the web of life has never been more urgent.