“Compression of the throat”, “reduced nutritional condition”, “injuries not consistent with life”, the forensic expert’s words sound abstract. But the images are real. Body after body is projected to the courtroom wall. Some are thin like skeletons, others have open wounds. One body is entirely blue, while others are striped with red bruises. All of them have numbers written on their skin, or taped to their foreheads, indicating their prisoner numbers and which secret service branch they were killed in. Even six years after their first publication in January 2014, it is hard to get used to the so-called “Caesar” files, a collection of tens of thousands of images depicting inmates who died in Syria’s prisons.

The files were collected by two men, referred to as “Caesar” and “Sami” to protect their identity. They started collecting the photos in May 2011. They were convinced that the regime would fall within a few months and that they would be able to use them as evidence in a trial against the toppled president. But almost ten years later, Bashar al-Assad is still in power and the killing in Syria continues. Thousands of photos of dead prisoners, their naked bodies bearing traces of torture and starvation, have not been able to change that.

One part of Caesar’s and Sami’s plan, however, has now been put into practice: for the first time, their files have been used in a court of law to prosecute crimes of the al-Assad regime. The photos were shown and discussed in Koblenz, Germany, where two former secret service members from Syria stand accused of crimes against humanity. Eyad al-Gharib, a low-ranking officer, allegedly arrested protesters and took them to the general secret service’s branch 251 in Damascus, where Anwar Raslan was the alleged head of investigations. According to the indictment, this would make him responsible for 4,000 cases of torture, 58 killings and two cases of sexual violence. The Caesar files do not show those 58 bodies, but they shed light on the systematic violence used in all detention centres.

Photographing up to 70 bodies per day

Caesar and Sami did not appear in court in person, for security reasons. Both are living somewhere in Europe, in witness-protection programmes. Their story was told to the judges in Koblenz by Garance Le Caisne, a French journalist who met Caesar and wrote a book about him, and a German federal police (BKA) officer who interrogated Sami in November 2017. According to their testimonies, Caesar was a crime scene photographer for a Syrian intelligence service. But during the civil uprising in 2011 his job changed suddenly. He and his team were ordered to go to the military hospital Tishreen, to photograph the dead bodies delivered there by the secret service branches.

When Caesar first saw the pictures his colleagues had taken – before he himself was sent to Tishreen - he immediately confided in his old friend Sami. “He called me and said he needed to talk urgently,” Sami recounted in his BKA interrogation. “He said he was receiving such terrible photos.” The two met in Sami’s home where Caesar told him about “maltreated corpses whose condition was not in line with the medical report”. Sami, a civil engineer, was already an activist. He convinced his friend not to defect, but to stay in this job for a little longer and collect the photos as evidence. For almost one and a half years, Caesar kept photographing the bodies and copying the photos to a USB flash drive that he hid in his sock or belt, until he passed them on to Sami.

With time, the number of bodies exploded. “There was no more space, even in the corridors,” said journalist Le Caisne. The bodies were then transferred to a larger military hospital named Mezzeh, where Caesar said he and his colleagues ended up photographing up to 70 bodies per day. In September 2013, the situation became unbearable. Sami and Caesar decided to leave, but not before smuggling almost 100,000 files out of the country. These travelled on, according to the BKA, via the opposition network of the Syrian National Coalition, to Liechtenstein and Qatar, and to investigative offices in the USA and Europe, including the FBI and the German federal prosecutor, who handed a copy to Professor Markus Rothschild to analyse them forensically.

No cause of death visible in 85% of cases

Professor Rothschild, from Cologne University, has spent three years studying the maltreated bodies in the photos, together with a colleague, Professor Sibylle Banaschak. On the 41st day of the Al-Khatib trial he presented their findings, illustrating each cause of death, injury, or illness with pictures of dead inmates. He described how the red lines littering many of the bodies could only be caused “when you really thrash someone, when you reach back as if you are playing golf or tennis.” “Why are they so parallel?” he asks and answers immediately: “The victim was not moving. They must have been fixated, either hanging or lying on their back.” Following the descriptions, Rothschild breaks his results down into facts and numbers: most of the 6,821 dead individuals he studied were between 20 and 45 years old; there are usually three to four pictures per body; the majority are naked or in underwear; 35 percent show signs of starvation and 90 percent of injuries were caused by blunt force.

The strangest number in Rothschild’s statistics must have been this one: in 85 percent of the cases, no cause of death was visible. Half of the inmates did not even show major injuries. But all of them were dead. Rothschild names a few causes of death that are not visible from the outside: poisoning or electrocution, suffocating due to lack of oxygen or suffocating due to constrained postures. This is consistent with torture methods described by survivors in a BKA report, that Rothschild compared with his findings. For a method called “Shabah” inmates’ wrists are tied together and hung from a hook on the ceiling or a door frame for hours, while their toes hardly touch the ground. “This not only hurts, but also restricts breathing, which can lead to a lengthy suffocation,” Professor Rothschild explains. Overall,  his analysis of the photos was in line with two BKA reports on torture and prison conditions: “The witness accounts in the reports were predominantly plausible,” Rothschild concludes. 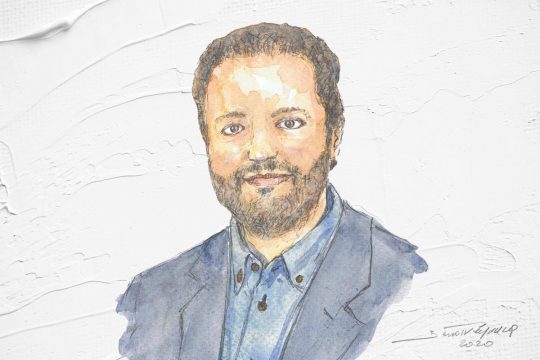 Syrian trials in Europe: “They give a distorted perception of the crimes perpetrated”

According to the witnesses in Koblenz, the Caesar files are authentic, and they are proof of unimaginable abuse. But what do they mean for the trial against Raslan and al-Gharib? According to the BKA officer, two witnesses have claimed that the corpses from branch 251 were mostly taken to a different military hospital called Harasta. Perhaps that is why only one case in the Caesar files can be linked to the time and the place of the crimes that the two defendants are accused of: branch 251, in 2012. The man in those photos has bullet wounds, but shows no signs of torture, starvation, or captivity, such as blindfolds or handcuffs. And, unlike the other photos, the branch number 251 is not written on his body. It only appears in the file name.

Nevertheless, “these pictures can prove that the crimes happened in the context of a widespread and systematic attack against a civilian population, which would define them as crimes against humanity,” civil parties lawyer Patrick Kroker explains to Justice Info. After the judgement is rendered in Koblenz, he adds, it will serve as a precedent for future trials.

Another important aspect is the systematic nature of the abuse, visible in the photos. It suggests that despite small differences, all security branches were following the same modus operandi, said Professor Rothschild. “The similarities outweigh the differences,” he told the court.  Looking through the thousands of images, he and his colleague regularly thought that they had made a mistake and worked on an image twice. “Then we realized that the case just looked exactly the same as another one. It seemed that the same torture instruments were used in the same manner everywhere.”