From the first day of the trial, Eyad Al-Gharib enters the courtroom with a large jacket hood pulled down and wearing a facemask during most of the hearings, making it clear that he does not want to be seen. And indeed, he has managed to stay in the shadow of Anwar Raslan, the high-ranking Syrian officer who was head of investigations at intelligence service Branch 251 in Damascus. Media and activist circles have logically focused more on the man accused of torture in more than 4,000 cases and 58 killings, rather than on the one who allegedly “aided and abetted” these crimes against humanity by rounding up protesters and taking them to the notorious prison.

Both men stand accused in the first trial worldwide dealing with systematic torture in Syrian prisons. Twelve court days have passed since the trial began in the German city of Koblenz on the 23 April. Unlike Raslan, who denied all charges against him in a lengthy statement read by his lawyer, Al-Gharib has not spoken a single word, apart from stating his name to the judges. But testimonies by German investigators and migration officials have helped piece together an image of who this seemingly less important defendant might be. And even though he played a much smaller role in the crimes, his case is perhaps more controversial. It raises the old question of accountability for someone who was “just following orders”.

“Once you are in you cannot get out”

During the hearings, Al-Gharib’s face is often resting in his hands and gradually disappears behind them when details of torture are given or his children are mentioned. During breaks he has lively discussions with the translator, gesticulating in a way that one might when describing delicious food or the layout of a room. But the most reliable way of learning about the 44-year-old defendant has been through a mosaic of documents presented to the court: a military ID listing his status as voluntary conscript; a letter to the youth welfare office in Germany stating that his 19-year-old daughter suffers from muscular dystrophy and is in a wheelchair; a criminal complaint about an incident at the refugee home in Hermeskeil where he slapped a boy and threatened to chop off his head and hand; and then, the detailed accounts Al-Gharib gave to the migration office and the federal police (BKA) about his career.

Al-Gharib was born in Damascus in 1976 and grew up in the eastern Syrian governorate of Deir az-Zor. At the age of 20, he joined the general intelligence service in Damascus, where he spent more than ten years as an instructor of physical fitness. In 2010 he was assigned to Branch 251, where his job was to collect information for the “religious department”. That meant joining Friday prayers at Damascus mosques to hear whether the Imams were criticizing the government in their sermons. In July 2011, half a year before his defection, Al-Gharib was again transferred to what he called in his asylum hearing “a dangerous division”. When asked what was dangerous about it, he said that “once you are in you cannot get out. It is like a mafia”. He was referring to Branch 251’s subdivision 40, led by the Syrian president Bashar al-Assad’s cousin, Hafez Makhlouf, known to be influential and ruthless. 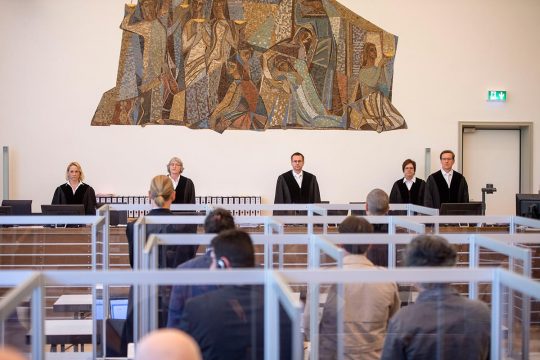 They felt too safe: how two Syrian agents ended up on trial in Germany

Whilst Raslan and Al-Gharib are seated next to each other it is hard not to compare them. Raslan is confident, Al-Gharib hides his face. Raslan is educated – he did legal studies before joining the intelligence service. Al-Gharib did not even graduate from high-school. Journalist Karam Shoumali explains in a  podcast, “Branch251”, that he grew up in a rural area in Deir az-Zor and lost his father as a child. When asked during his asylum hearing whether torture was legal in Syria, he answered that “torture is legal everywhere”. Even the two defendants’ routes to Germany show a profound class difference: while Raslan received a visa from the German embassy in Amman and flew directly to Berlin Tegel Airport, Al-Gharib spent six months hiding in Syria and then five years, two months and 13 days en route via Turkey and Greece to Germany, on foot, mini bus and rubber boat. Finally, the family was able to apply for family reunification.

But the most relevant difference between the two is that one was in a position to give orders while the other was hardly able to refuse them without risking his own life. Three months after his asylum hearing in Germany in May 2018, Al-Gharib was summoned by the BKA to testify as a witness in a structural investigation. The so called “Strukturermittlungsverfahren” has been conducted by the chief federal prosecutor since 2011, to collect evidence about crimes against international law committed in Syria. When a Syrian asylum seeker mentions having witnessed such crimes, their file is automatically forwarded to the BKA. This is how Al-Gharib ended up in an interrogation, during which he gradually turned from witness to suspect. That he was not instructed about his rights as a suspect, according to his defence, might lead to the exclusion of his important accounts from evidence.

“If you love the president, open fire at the traitors!”

One of the incidents he described to the BKA was a peaceful protest in Duma in 2011 that he and his division were called to. According to Al-Gharib, Hafez Makhlouf arrived in a large Mercedes jeep, jumped out of the car, and shouted: “If you love the president, open fire at the traitors!” He then started firing his machine gun into the crowd and others followed suit. Al-Gharib said he tried to lay low and quietly avoid shooting at the protesters, and that this was the moment when he decided to defect. But that testimony backfired. The indictment speaks of the events that took place “after Makhlouf started shooting”. Al-Gharib and his colleagues allegedly searched the surrounding streets for the fleeing protesters and rounded up at least thirty civilians. They were taken to Branch 251, beaten in the car and on arrival, and later tortured. Even though Al-Gharib is not accused of participating in the protesters’ abuse, he may be found guilty of taking them to a place where he knew they would be tortured.

According to the German code of crimes against international law, a person following orders can be relieved of their criminal responsibility if they did not know and it was not “manifest” that the order was unlawful. However, according to the Rome Statute of the International Criminal Court, which has been ratified by Germany, this does not apply to crimes against humanity. But what do these paragraphs mean in a country in civil war where refusing to shoot could mean being shot yourself?

“Superior orders is an extremely common excuse,” says Patrick Kroker, an international criminal lawyer from the European Center for Constitutional and Human Rights which supports seventeen victims-witnesses in the trial. This argument was used during the Nuremberg trials, yet it rarely was successful, recalls Kroker, adding that the German judiciary has set high requirements for that claim. It would have to be justified by “an immediate danger to life or physical well-being if one were to refuse”. “From what we know, he was not picked up from his home at gun-point, placed into the system and forced to do a job. These are people who worked for years to reach a certain position,” says Kroker. However, Al-Gharib’s penalty could be reduced, he adds, if the second knife of the Koblenz’s trial is convicted - as charged - as merely aiding and abetting. “Compared to others he surely bears a lesser responsibility.”