Following the establishment of the Special Tribunal for Lebanon (STL) in 2007, colleagues and I wrote an article in which we concluded that the “STL remains limited in scope and, at most, can only be a first step toward establishing a culture of accountability in Lebanon.” More than a decade later, the court’s first judgement in the case that triggered its creation shows that even our reluctant optimism back in 2007 may have been unwarranted. Worse, the STL may have actually contributed to reinforce the culture of impunity that has prevailed in Lebanon since its independence.

After 15 years of investigations and a trial in which were involved three successive international bodies – the UNSG-appointed Fitzgerald Fact Finding Mission, the UN International Independent Investigation Commission (UNIIIC) and the STL itself – the tribunal’s Trial Chamber pronounced on 18 August 2020 a judgement that convicted in absentia Salim Ayyash, a lower ranking Hezbollah operative (referred to by the judgement as a Hezbollah supporter), of the assassination of Lebanon’s former Prime Minister Rafik Hariri in a massive blast that killed 22 people. Three other defendants, also at large, were acquitted. On 11 December 2020, Ayyash was sentenced by the STL to life imprisonment.

The original sin: A drop in an ocean of unpunished crimes

Lebanon has witnessed a succession of wars since 1975 that were marked by very serious human rights violations including war crimes and crimes against humanity that have remained unaddressed. The 1975-1990 war ended with a blanket amnesty law that completely ignored victims’ rights and demands. Also, the well-documented war crimes that occurred during the July 2006 war opposing Israel and Hezbollah are still unpunished to this day. In May 2008, the sectarian violence that erupted in Lebanon following the deployment of Hezbollah fighters in Beirut and neighboring areas was accompanied by egregious crimes that were never dealt with.

In this context of widespread abuses and persistent impunity, the legitimacy of the STL in the eyes of the Lebanese was from the very outset undermined by its narrow mandate which many saw as no more than selective justice. (The STL’s primary mandate is to try those accused of the attack of 14 February 2005 which killed Hariri. It also has jurisdiction for a few other attacks connected to the Hariri assassination.) The STL judgement did nothing to address the legitimacy problem the institution suffered from since its inception. On the contrary, the judgment’s pronouncement was perceived by most Lebanese as the proverbial mountain that gave birth to a mouse.

The legitimacy of the STL in the eyes of the Lebanese was from the very outset undermined by its narrow mandate which many saw as no more than selective justice.

Despite its original sin of selectivity, the STL could have offered an opportunity to break the cycle of impunity for political assassinations in the country. Indeed, Lebanon has witnessed since its independence hundreds of political assassinations or attempts that remained unpunished. They have targeted senior government officials, high profile political figures, parliamentarians, leading journalists and intellectuals, including two presidents and three prime ministers. Many of these attacks were followed by violence and instability that left hundreds of victims. By ending total impunity for this succession of assassinations and the ensuing violence, the hope was that an accountability precedent would be set in the country. However, for this to happen, the STL prosecutor needed to take full advantage of the huge capabilities at his disposal and the robust legal tools the STL statute provides him with to expose the system that has enabled the assassinations falling within the court’s jurisdiction and unpack the chain of command behind these crimes.

Following the multiples failures of the Lebanese investigation into the Hariri assassination that many saw as a succession of cover-up attempts, the Lebanese had the hope that the capabilities and independence guaranteed through an international court would ensure that those responsible for ordering and executing the assassination of Hariri that also left 21 dead will be held accountable, no matter how influential or powerful they may be.

After spending close to one billion dollars according to estimates, nine years of investigation and six years of trial, the STL convicted a lower ranking Hezbollah operative of the assassination strangely stating in its judgement that “Syria and Hezbollah may have had motives to eliminate Mr Hariri, and some of his political allies” but “[t]here is no evidence that the Hezbollah leadership had any involvement in Mr Hariri’s murder and there is no direct evidence of Syrian involvement in it”, adding that “there is no evidence that Mr Ayyash or Mr Badreddine [a Hezbollah military commander who was initially indicted but subsequently killed in Syria in unknown circumstances in 2016] were directed by the Hezbollah leadership to arrange logistical support for Mr Hariri’s assassination.”

Anyone with basic knowledge of Hezbollah would know that it would be impossible to conduct an operation of such magnitude targeting a leading political figure in Lebanon and the region without the involvement of the group’s leadership.

Anyone with basic knowledge of Hezbollah would know that it would be impossible to conduct an operation of such magnitude targeting a leading political figure in Lebanon and the region without the involvement of the group’s leadership. Hezbollah is a highly hierarchical and centralized organization where no such operation could be arranged or executed without orders – let alone the knowledge – by its top leadership.

The judgement was met with a mix of disbelief, derision and resentment among the Lebanese but also the Syrian public. Within hours, social media platforms filled up with comments mocking the judgement as absurd and denouncing it as politicized. According to one of the many jokes that circulated following the judgement, it appears that Salim Ayyash got up one morning on the wrong side of the bed and decided to kill Lebanon’s most powerful politician. In another witticism, the whole case would come down to Ayyash giving a phone call (the judgement mostly relied on telecommunication data) in reference to an unrelated Arabic song from the 1990s by Lebanese popular musician Ziad Rahbani called talfan Ayyash (Ayyash called).

Nevertheless, for those closely following the process, the outcome was by and large predictable since the Trial Chamber had to stick to the indictments and evidence submitted by the prosecutor. But a question immediately comes to mind here: Why did the prosecutor clearly choose to avoid looking into the chain of command behind the Hariri assassination? If solid evidence of direct orders by the group’s leadership were unavailable, why did the prosecutor abstain from looking into command responsibility as provided for in article 3, paragraph 2 of the STL statute?

Serious doubts about the prosecutor’s work were voiced by prominent Lebanese journalist Michael Young who covered the investigation since its early days. He suggests in a damning piece published ahead of the judgement that Serge Brammertz, STL’s first prosecutor, “did not want to uncover anything” because he “may have sensed that the [UN] was worried that naming Hariri’s assassins would lead to sectarian conflict” in the region following threats made by Syrian President Bashar Assad to UN Secretary General Ban Ki-moon during a meeting in Damascus and subsequently leaked to the press.

The mirage of political independence

In the evening of the judgment day, to the shock of many Lebanese, Charles Rizk – who as Lebanon’s Minister of Justice back in 2006/2007 oversaw the negotiations with the UN on the establishment of the STL – revealed on a popular talk-show that he shared every draft of the STL statute with Hezbollah’s Secretary General Hassan Nasrallah during the negotiations and added that he did it in coordination with Wafik Safa whose name actually appears more than twenty times in the STL judgement as Head of Hezbollah’s Central Unit of Liaison and Coordination back in 2005.

The Lebanese were hoping that an international court shielded from political pressure and interference would be able to independently and fully investigate the massive blast that killed Hariri on Beirut’s waterfront in 2005. But the STL judgment left them with the impression that the tribunal’s independence was only a mirage and the feeling that yet again impunity would prevail. And their resentment was exacerbated when they learned through media reports how exorbitant the process’s price tag was. For the past 13 years, Lebanese taxpayers have annually contributed to 49% of the STL budget.

The Lebanese were hoping that an international court shielded from political pressure and interference would be able to independently and fully investigate. But the STL judgment left them with the impression that the tribunal’s independence was only a mirage and the feeling that yet again impunity would prevail.

The one individual involved in the investigation that the Lebanese remembered with emotion and whose memory they saluted on the day of the judgement was Captain Wissam Eid, the 32-year old Lebanese police investigator whose groundbreaking work uncovered the telecommunication data that served as a central piece of evidence in the case. Wissam Eid was killed in 2008 by a car bomb in the suburbs of Beirut. Another senior Lebanese investigator into Hariri’s assassination, Samir Shehadeh, had survived a roadside bomb that targeted his convoy two years earlier and left him seriously injured. The STL which massively relied on Eid’s work could not ensure his safety and protection. In its 2228-page judgement, the tribunal never mentions Eid’s name except marginally, in footnote number 4644.

The worst model at the worst time

In sum, the STL has proven to combine in one tribunal some of the worst downsides of international justice institutions – a costly process, heavy bureaucracy and disconnect from those it is meant to deliver justice to – with the most acute problems that so often characterize national criminal processes : strong suspicions of political interference and serious security risks for those involved in an investigation.

Such conclusion could not come at a worst moment for Lebanon, but also Syria. The judgement was delivered two weeks after another gigantic blast devasted Beirut on August 4, 2020, killing more than 200, injuring thousands and leaving hundreds of thousands homeless. For the Lebanese, only an international investigation could be trusted to uncover its causes and identify those responsible. However, the STL judgement came like a cold shower and dashed the hopes that an international body could effectively deliver the truth on the August 4 explosion.

It was a shock for Syrians too. For a decade, they have been struggling for justice and accountability for the horrific crimes they have suffered since 2011. They can now seriously question the ability of international justice to deliver.

As the first and only international criminal court established in the Middle East and North Africa region, the Special Tribunal for Lebanon was seen as a first step towards accountability. It gave hope to victims. 13 years later, it turns out to be yet another setback for justice whose legacy would only perpetuate Lebanon’s culture of impunity. 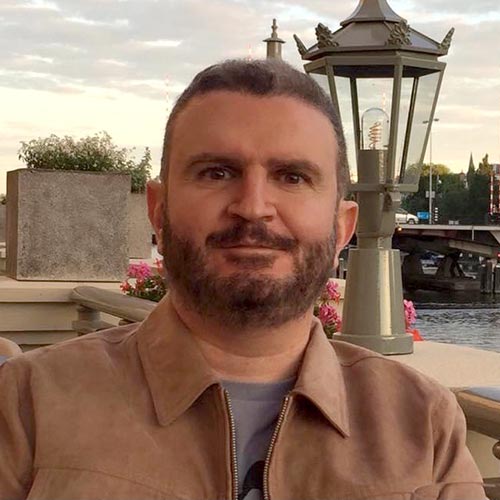 Habib Nassar is Director of Policy and Research at Impunity Watch. He is a lawyer and human rights advocate with nearly 20 years of experience in matters of accountability, justice and redress for victims. He has extensive experience working in several contexts in the Middle East and North Africa region including Algeria, Egypt, Iraq, Lebanon, Morocco, Syria, Tunisia and Yemen.

Copy this HTML into your CMS
Press Ctrl-C to copy
Lebanon : Related articles
Trying Russian leaders in absentia: What would be the pros and cons?
Special Tribunal for Lebanon’s “second best justice”
Most read
Did Christopher Columbus commit genocide?
Everything you need to know or argue about a special tribunal on Russia’s crime of aggression
Opinion - Related articles
Colonial racism catches up with Amsterdam Rijksmuseum
In Finland, Sámi rights take central stage in national politics