Jean-Marie Kasula's name has become known around the world. His brush with officials of the Kahuzi-Biega National Park (KBNP) in southeast Democratic Republic of Congo (DRC) brought sudden notoriety to this leader of a small village of indigenous pygmies. When his arrest was announced in January 2020, some local media portrayed him as a "warlord spreading terror and desolation" like the leaders of armed groups active in the region.

But when the trial opened, he was not charged with killing or ordering the killing of people, nor of raping women. The Twa chief was charged with acts harmful to the PNKB. On February 4, 2020, he was sentenced to 15 years in prison for criminal conspiracy, illegal possession of weapons and destruction of flora in protected areas. Seven other members of his community, including two women, were also sentenced.

A family on its ancestral land

Kasula and his family immediately appealed, with the support of some one hundred local and international organizations angered by the ruling. They deny that they are a criminal association formed to plunder the park, instead presenting themselves as a family claiming their right to their ancestral lands. They say they returned to the park not to engage in "wicked destruction of nature", as described in the sentence, but in search of means of survival, the park being their motherland. They also asserted that there had been several violations of their rights during the trial.

Kasula and the two women were released on bail pending the appeal case, while the other five men remained in jail. One of them died because of the poor prison conditions. There was also another twist: Kasula was re-arrested in January 2021 for entering the park. A second case was brought against him - in which he was again provisionally released.

The park is still the winner

On the afternoon of July 30, the appeal judgment in the first trial was handed down. The Military Court of South Kivu acquitted the Twa of the criminal conspiracy charge, which was the most serious one brought against them. However, it found Kasula and four other men guilty of illegal possession of weapons and destruction of flora, sentencing each of them to 15 months in prison. The two women were found guilty only of destroying flora in protected areas, and were sentenced to 12 months. Since all of them had already spent more time in prison than the sentence, the appeal judges ordered their immediate release.

On the afternoon of July 30, the appeal judgment in the first trial was handed down. The Military Court of South Kivu acquitted the Twa of the criminal conspiracy charge, which was the most serious one brought against them. However, it found Kasula and four other men guilty of illegal possession of weapons and destruction of flora, sentencing each of them to 15 months in prison. The two women were found guilty only of destroying flora in protected areas, and were sentenced to 12 months. Since all of them had already spent more time in prison than the sentence, the appeal judges ordered their immediate release.

"The court understood and did not retain the charge of criminal association, because the defendants are all from the same family. It would be illogical to treat a whole family as a criminal association," said David Bugamba, one of the defence lawyers in the appeal. But the park is still the winner: each of the convicts must pay one million Congolese francs (about 500 USD) in damages for the harm done to the park. And the appeal ruling still does not grant land to the Twa.

A reserve for indigenous people?

The Congolese lawyer urges the government to "respect its commitments" to the Twa. "There have been many meetings, there have been recommendations, but the Congolese state is dragging its feet. It does not want to honour its commitments, including granting space to these indigenous people.” The lawyer is referring to negotiations between 2014 and 2019 aimed at finding an amicable settlement with the PNKB. During the last round of discussions in September 2019, it was agreed that land would be identified and made available for the benefit of indigenous communities bordering the PNKB. In return, the Twa were to stop deforestation activities and leave the areas they occupied at the time.

Bugamba does not rule out "taking the matter to regional and international bodies such as the African Commission on Human and Peoples' Rights" if the government does not grant land to the Twa, "who are now reduced to wandering".

For Lassana Koné, a lawyer with the Forest Peoples Programme (FPP), one of the many international NGOs that mobilized for the appeal, the military court in South Kivu "could have granted the defence request by confirming the obligation of the Congolese state, which has been slow to find a satisfactory and lasting solution to the fragile situation of the Twa communities it expelled from their ancestral lands without their consent, without any compensation, or any resettlement plan.”

"The challenges remain and the main issue today is to find a lasting solution to the fragility and misery caused by dispossessing the communities of their ancestral lands," he continues. He urges the Congolese government to "recognize that the current marginalization and poverty of these communities is a consequence of their expulsion from the park in the 1970s”. After that, he says, "this injustice must be redressed so that they can live in dignity.”

"Park boundaries will never be touched"

The PNKB says it is out of the question to give park land to the Twa. "The boundaries of the park will never be touched for that," park director De-Dieu Byaombe told Justice Info. According to him, the communities bordering this protected area sold the 15,000 hectares of land they had been given in 1975 by the state (Zaire, at the time). "The same thing will happen again: they will sell and nothing will be sustainable," continues Byaombe, who says he has "never accepted the story that the Pygmies, who are nomads, were chased out" of the park.

Speaking about the July 30 ruling, Byaombe gets angry: "We know that there are NGOs that gave a lot of money to buy this ruling. This weakens justice in our country.” But then he changes his tone: "Our greatest concern is for peaceful cohabitation, and getting the Twa people living near the park to understand that this conservation is for them, their children and their grandchildren. "It’s true that we should be concerned for these forest dwellers and that they have a decent life," he says. According to Byaombe, the PNKB is contributing to the schooling of 1,500 Twa children for the current school year, and employs 60 members of this community among its staff.

The Twa of the Great Lakes region can also be found in Burundi, Rwanda and Uganda, facing similar problems. In an August 20 ruling in Kampala, Uganda's Constitutional Court found the government guilty of driving the Twa from their land. “The Batwa have been left disadvantaged, owing to their eviction from the said land, and also due to the nonpayment to them of adequate compensation which would have facilitated in their relocation to similar lands. This has rendered them landless and has severely affected not only their livelihoods but has destroyed their identity, dignity and self-worth as a people and as equal citizens with other Ugandans,” the five judges concluded unanimously. In Uganda, these indigenous people were driven out of their natural environment in Echuya Forest, Bwindi Impenetrable National Park and Mgahinga Gorilla National Park, three protected areas in the southwest of the country.

In Uganda, Rwanda and Burundi, as in the DRC, the Twa suffer from social marginalization and are among the poorest in the population. 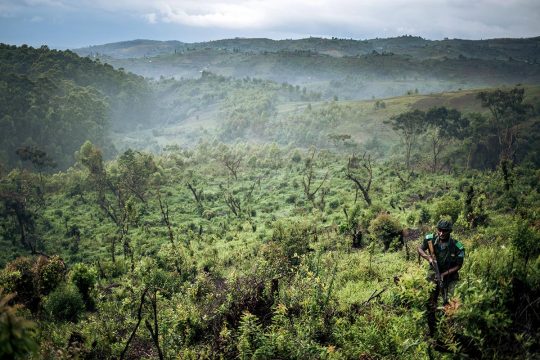