The 20th anniversary of 9/11 and of the global war on terror coincides with a momentous national movement for racial justice in the U.S. These milestones are linked, but efforts to address them remain largely isolated from each other. A carefully devised transitional justice process could offer an effective framework to address how the militarization of U.S. foreign policy and domestic policing are mutually reinforcing. It would also facilitate a reckoning with the deadly consequences.

Efforts to establish a transitional justice process in the U.S. have thus far been overwhelmingly focused on historical harms inflicted within U.S. borders. These include the Greensboro Truth and Reconciliation Commission, the Maine-Wabanaki Child Welfare Truth and Reconciliation Commission, and a recently re-introduced resolution to establish a national U.S. truth commission for racial healing.

But can we separate the violent impact of American foreign policy from the violence of American domestic policing when drawing up a transitional justice plan for the U.S.? Many argue that they are inseparable. This includes American scholars, U.S. army veterans, former police officers, federal prosecutors, and advisors at the Department of Homeland Security.

Such experts draw attention to the ways in which the militarization of U.S. foreign policy has worsened domestic policing practices, especially since 9/11. Both are typically driven by national security priorities. Both are also driven by the racialization of U.S. and non-U.S. citizens at home and abroad.

Victims of U.S. foreign policy are in and outside the U.S.

American police officers have increasingly used military-grade weapons, including attack helicopters and armored vehicles, for everyday police patrolling that disproportionately targets Black and other marginalized communities. Police departments receive military training, which has led many of them to act with the mentality of soldiers, as opposed to that of ‘peace officers’. One stark example is that of collaboration between U.S. law enforcement agencies and the Israeli military, which, as human rights attorney Noura Erakat explains, has involved thousands of US police officers traveling to Israel to receive training in counter-terrorism methods. Erakat points to race as a major underlying driver of such practices, whereby Israeli officers train “US law enforcement officers – responsible for peacetime order – in methods that Israel applies to Palestinians, whom it considers a foreign and enemy population.”

It is time to devise a transitional justice process in the U.S. that addresses such direct as well as indirect linkages between American domestic policing and U.S. foreign policy. Calls for a national reckoning with systemic racism in the U.S. must address the impact of post-9/11 foreign policy on the militarization of domestic law enforcement, including policing of racialized communities in the U.S. Failure to do so would result in a transitional justice process that produces an amputated picture of historical injustices in the U.S., risking the repetition of policies that fuel racial inequality and injustice.

Victims of U.S. foreign policy reside both within and beyond U.S. borders. Since 9/11, over 929,000 people were killed as a result of direct violence in the U.S.-led “war on terror”. Brown University’s Costs of War project estimates that several times as many have been killed by indirect effects of the war, and that 38 million people were displaced or became refugees.

In addition to the militarization of U.S. law enforcement agencies across the U.S., the USA Patriot Act and other surveillance laws have vastly expanded the powers of domestic law enforcement agencies to monitor, racially profile, and detain individuals suspected of involvement in terrorist activity. Mass incarceration is another practice that cannot be understood without considering how policing is often shaped by race as opposed to public safety. The U.S. has one of the highest incarceration rates in the world, whereby black people and other people of colour are at a much greater risk of being imprisoned compared to white people.

None of this is news to anyone – the history of systemic racism in the U.S. and its impact on law enforcement practices are well documented. But policymakers, and transitional justice practitioners in particular, must examine national security policies that target Americans and non-Americans at home, as well as those abroad, as inextricable. As Professor of Law at UCLA School of Law Asli Bali puts it, “dismantling the structures of racist policing at home will require recognizing the continuum of security state violence that connects domestic policing, border enforcement and America’s ever-expanding military footprint abroad.”

Of course, the newness of the ‘post-9/11’ world has been rightly challenged. Upendra Baxi, Professor of Law at University of Warwick, UK, sums it up by stating that the myth the 9/11 attacks were new in world history reduces many histories of multiple terrorisms to a single date. This leads to a collective amnesia regarding the pre-9/11 world. It is this collective amnesia that transitional justice – and indeed a national truth commission – could and should seek to redress.

Race as a central factor

The Black Lives Matter movement and its allies are crucial actors in redressing this societal amnesia by asserting the importance of a serious reckoning with historical and complex injustices.

For instance, in her 2016 article, “Witness Against Torture, Guantanamo and Solidarity as Resistance”, Colgate University Assistant Professor of Sociology Chandra Russo underscores the importance of solidarity movements that focus both on domestic policing and U.S. military practices abroad. Witness Against Torture (WAT), a group of U.S. citizens who advocate for Guantanamo Bay detainees, allied itself with the Black Lives Matter movement “to link torture and detention abroad to the murderous policing and hyper-incarceration of black and brown communities throughout the U.S., exposing the deep hold of US racial despotism.”

Through such alliances, the inhumane practices of American policing at home powerfully demonstrate “the regimes of capture, incarceration and torture that undergird the US national security state.”

A national truth commission and a broader transitional justice process that prioritizes accountability, reparations, and reform, would bolster the chances for such anti-racist solidarity to translate into policy.

As a movement that requires both looking back and looking forward, transitional justice could serve as a framework that exposes race, and not security nor public safety, as a major driver of harmful domestic policing and surveillance as well as destructive ‘counter-terrorism’ wars abroad.

Expanding the reach of a national truth commission

But is transitional justice equipped to pursue such a task?

Few transitional justice initiatives address the transnational impact of crimes committed by state and non-state actors. Designing a transitional justice process in a way that takes into account the complex interplay of domestic and foreign policies and how they perpetrate crimes against those who reside within and outside the U.S. is no small feat, but it is possible.

Representative Barbara Lee’s resolution to establish a national truth, racial healing and transformation commission in the U.S. is gaining support among the movement’s supporters both in government and outside of it. Such a truth commission should establish a committee that documents how the militarization of foreign policy has in turn militarized domestic policing in the U.S. with deadly consequences.

Such documentation would serve as a powerful way to expose, memorialize, and reckon with individual stories about how domestic policing and U.S. foreign policy have impacted the daily lives of the most disadvantaged in the U.S. Through televised or streamed live hearings, it would engage with history in a way that recognizes and addresses that America’s actions abroad are intertwined with how it polices its own people within its borders. It would, ultimately, lead to more effective truth-seeking, accountability, reform, and historical narratives that better represent the contexts within which injustices are perpetrated.

How Biden’s America can reverse its course on international justice 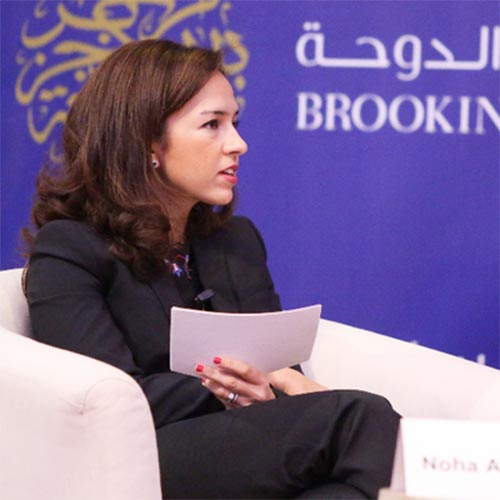 Noha Aboueldahab is a non-resident fellow at the Brookings Institution’s Foreign Policy program and the author of Transitional Justice and the Prosecution of Political Leaders in the Arab Region.

Slavery: what the United States can learn from Africa about reparations

France or Germany: state torturers, don't go to the wrong place
Most read