People who travel this stretch of road call it the "stations of the cross”. It connects Kananga, capital of Kasai Central province, to the town of Bana ba Ntumba. It took the delegation from Kananga garrison military court, lawyers, seven defendants and their military guards two days to travel only 180 kilometres in a large Russian-made Camaz military truck. They left on Saturday, April 9, and arrived on April 11 at midnight. It was a real ordeal, owing to the dilapidated state of the road, but that did not discourage the judicial convoy. From April 12 to 19, the town of Bana ba Ntumba, southwest of Kananga, hosted the mobile court hearings in the war crimes trial of former members of the Kamuina Nsapu militia, after a first hearing in Kananga on April 8.

The violence in question occurred in May 2017, during deadly clashes between the Kamuina Nsapu movement and the DRC armed forces. Kamuina Nsapu was a nebulous group of militias established in the different territories and provinces of the Kasai, which claimed to be part of this movement but were not necessarily all linked from an organizational point of view.

In this trial in the territory of Dimbelenge, on the edge of Kasai Central, there are 255 civil parties. The seven defendants present - two others are still at large - are being prosecuted for the war crimes of murder, beheading and torture, as well as participation in an insurrectional movement, criminal association, and terrorism. The attacks affected several villages, including the locality of Bana ba Ntumba, where the court decided to go.

The population of this large town lives mostly from the land. Most of the local youth are artisanal diggers in search of diamonds. There are not many buildings with metal roofs, except for the Catholic church.

The defendants present - Ngalamulume Mbombo wa Mesu alias Sadam, Martin Lumpungu Kasongo alias Tshidibuelele, Kabalenge Kabalenge, Evariste Tshibaka Mukengeshayi, Jean Muenyi Badipu, Mupenda Tshielela alias Kester, and Pierre Katanga Sewudi Mbelu – all pleaded not-guilty. At the hearing, a video of the execution of a victim was shown in which one of the defendants, Martin Lumpungu, appeared to be in command of the militiamen, calling them to order. In his closing arguments, the first prosecutor, Lieutenant-Colonel Papy Yumembuli, requested the death penalty for all the defendants. The civil parties demanded damages equivalent to $22,000 for the harm suffered.

The tension was palpable in Bana Ba Ntumba, and on the morning of April 19, the military tribunal decided to render its judgment that evening, although it had been announced for the following day. The population rushed to attend the historic judgment. The judges found no mitigating circumstances, and consequently sentenced the seven men "to death", announced the president of the tribunal, Lieutenant-Colonel Jean-Claude Nawej (the death penalty exists in the DRC, but is not applied). The two absent defendants received the same sentence, in absentia. This met with joy for some and sadness for others: tears for the families of the convicted, and jubilation in the other ranks.

Three trials in a year

The defence lawyers immediately appealed. "The court found the statements of the alleged victims enough to convict the defendants, even though there was insufficient evidence. That is why the defendants have appealed and hope this judgment will be overturned," explained lawyer Alidort Mampuya. But the civil parties said the defendants deserved an exemplary punishment. "Never again,” said one of the lawyers for the victims' families.  “The judge, who was independent, only said what was right."

As if remembering the sad times they lived through and ready to attack the convicts, a group of young people followed the delegation to the edge of the town. But it set off, for more long hours of muddy track, in which it would probably get bogged down. This was the second trial in Kasai Central on the 2017 violence. The first war crimes trial was held in the province in March 2021, in which a former Kamuina Nsapu leader was convicted and sentenced to life imprisonment. In October 2021, another trial of Kamuina Nsapu militiamen took place in the neighbouring province of Kasai. Two former members of the movement were convicted, one of whom was sentenced to death. 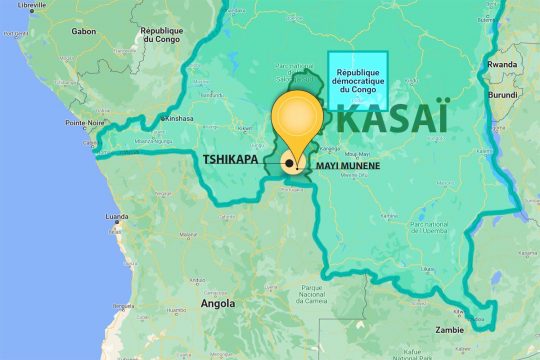