Paris University professor André Guichaoua, specialist in the African Great Lakes region and former expert witness at the International Criminal Tribunal for Rwanda, has just returned from Burundi. The country’s current situation raises “a lot of worries”, he told JusticeInfo.net, even if “most Burundians are currently showing signs of great political maturity”.

JusticeInfo.net: Given what has happened recently, do you agree with some observers that Burundi could be heading for an unprecedented crisis?

André Guichaoua: I think we have to wait and see how the electoral process unfolds before we start imagining scenarios. In the current context of a security clampdown, banning of independent media and climate of fear, voters are asking themselves whether it will be possible for them to participate freely in the vote in their villages and areas. The stakes are high, especially given the opposition call for a boycott.

The signs at the moment are that the vote will serve mainly to test the capacity of the CNDD-FDD (party in power) to mobilize voters for its candidates across the country and also test the efficiency of the means it deploys to ensure the procedures and try to get the biggest turnout and majority possible.

What happens afterwards will depend on what the opposition does.

JusticeInfo.net: Who are the opposition forces?

AG: There are now three:

• the political coalitions bringing together most of the former parties opposed to the CNDD-FDD;

• various protest groups that bring together rather unorganized youth and experienced activists. They have made a notable entry into politics in the name of “civil society”, making democratic demands that the traditional parties in power or in opposition are not addressing;

• various elements of the bloc still in power who remain attached to respecting the constitution and the current political balances, and who want to detach themselves from the authoritarian path that their leaders appear to be taking. Among them we find declared or undeclared dissidents in the CNDD-FDD, soldiers both from the former rebel side and former army, people in the police and many demobilized fighters from both sides of the civil war who resist the idea that the benefits of progress towards peace are being monopolized by a single politico-military faction of ex-rebels.

If, as they are trying to do, the various spokespeople of these forces manage to propose a leadership and a political framework that could unite these emerging opposition forces, they could definitely carry a lot of weight.

At the heart of the debate is the question of peaceful, “proportionate” or armed response in the face of confrontation with the political authorities who are expected to be declared re-elected.

Given the current determination of the “securocrats” who control power in the majority bloc and want to keep it via a totally skewed electoral process, there are lots of concerns for the future.

JusticeInfo.net: Why do you think President Nkurunziza has remained deaf to all the calls (from neighbouring countries, the African Union, the Euroepan Union and the UN?

AG: The Burundian authorities present themselves as victims of a national, regional and international plot aimed at re-installing the forces defeated in the civil war and then in the ballot box. As “proof”, they brandish the profile of officers implicated in the failed May 13 coup attempt and alleged support in various guises of neighbouring Rwanda to their opponents.

More fundamentally, they slam the perceived desire of international actors to evict from power a “clique” or “triumvirate” said to have acquired too much abusive power. They want to show that their party is structured and has, despite its weaknesses, deep support at grassroots, has shown over 10 years that it can command support, neutralize its opponents and strengthen its power in all sectors of society.

JusticeInfo.net: Do you think the international community is exerting enough pressure?

AG: Burundi’s government has itself decided to risk plunging the country into a serious political crisis. Its intransigence in the face of external pressures is the logical continuation. But the inefficiency of such pressure stems also from its inconsistency and the fact that calls are coming from countries or structures that are hardly models themselves of rule of law, democratic freedoms or proportionate use of force.

As fate would have it, Burundi is the first country in the region to go into an election period with a sitting president constrained by the Constitution. The authorities in power are convinced that the candidates in neighbouring countries, who today present themselves as guarantors of regional stability, will be viewed with more realism and favour when they also enter elections.

JusticeInfo: One of the opposition conditions for taking part in elections is disarmament of the CNDD-FDD youth wing (Imbonerakure). Are the allegations against this youth wing well founded?

AG: When the CNDD-FDD came to power, the youth league became the political instrument to recruit, manage and control the population, so as to strengthen the implantation and durability of the CNDD-FDD. At that time, quite a few of them were in some way the lost fighters of the demobilization programme that was put in place. The Party recuperated them to carry out various political tasks and local services that would give them some income. At the heart of this initiative was the surveillance of all potential “infiltrated elements” that might destabilize the authorities, first the Rwandan “enemies” that supported the former armed forces during the civil war, and then the leaders and activists of opposition parties…

The progressive slide towards a de facto one-party regime encouraged the presidency and the CNDD-FDD party to acquire their own politico-military force outside the army and police. Its influence and targets have thus developed in accordance with the increasing authoritarianism and now increasing security clampdown of the regime.

Local control of citizens is easily open to abuse, especially when resources are limited. In general, it’s a delicate matter to determine which among their activities is legal, abusive or downright criminal since they are also carrying out police and justice duties. Impunity therefore becomes the rule.

JusticeInfo.net: How important is the flight from the country of Vice-President Gervais Rufyikiri? Is it a big coup for Nkurunziza and his camp?

AG: In view of the difficulties currently facing the regime, the problem is not so much the numerous defections of personalities but rather the degree of personal commitment of these people to fight the regime, and the danger they represent for it. So for the Nkurunziza camp, the main worry with regard to the dissidents is the risk that they could set up armed rebel movements in cooperation with the internal opposition. And their second worry is about the loyalty of government military commanders.

JusticeInfo.net: Why do you think the presidential camp has clamped down so strongly on the independent media?

AG: Ever since the introduction of multiparty democracy it has been the public and private, independent media that have been setting the political and social agenda, rather than the politicians. From hilltop to hilltop, the people have been zapping between the different media with interest.

The news being broadcast in the country and beyond during the uprisings in popular districts of Bujumbura became intolerable for the authorities, because the ethnic and political content of protestors’ messages did not target only the government’s failings. Their strong and convincing calls also questioned the very foundations of an unjust and obsolete authoritarian social order, a message that was quickly understood by all the generations that have suffered. This unprecedented free speech made the repression look unacceptable disproportionate.

JusticeInfo.net: Some people think the crisis is taking an ethnic turn, whereas in the beginning it was political. Do you think it has become ethnic?

AG: To say that would be to jump the gun. In two months of deep crisis, the majority of Burundians have so far shown great restraint and political maturity to try to avoid abuses and the things that would result from that. This is not a result of abstract principles but of the long, difficult and still to be completed national debate started in 1988, which aims to recognize and deal collectively with the fears and resentments born of past massacres and put an end to all forms of exclusivity or segregation on an ethnic basis. Achieving this forms the strongest barrier against the prophets of doom and descent into ethnic conflict. 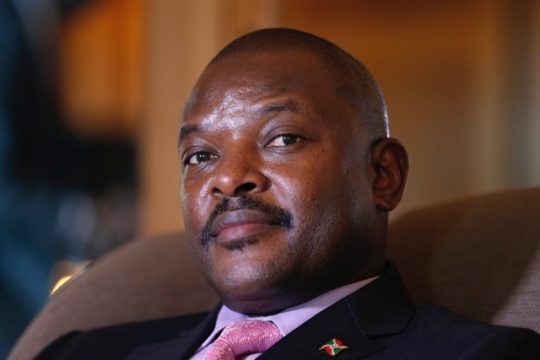