“Laurent Gbagbo and the political prisoners will be freed.” So goes the promise of opposition candidates in this Sunday’s presidential elections in Côte d’Ivoire. They have been repeating this on a daily basis since the official campaign started two weeks ago. Five years after the 2010 elections that led to deadly violence, the country remains deeply divided between supporters of current president Alassane Ouattara and those of ex-president Laurent Gbagbo. Detained by the International Criminal Court (ICC) in The Hague since November 2011, Gbagbo declined to publicly endorse any candidate. As the incumbent looks set for a comfortable win, Gbagbo has thus left half the country in doubt and tending towards abstaining. To try to win these voters, the opposition candidates (except for Jacqueline Claire Kouangoua) are promising – wrongly - that they can ensure the return of their leader.

“If I am elected President of the Republic of Côte d’Ivoire, one of the first things I will do on the evening of October 25 (first round of elections) is start working to get president Laurent Gbagbo freed,” independent candidate Gnangbo Kacou declared forcefully in the Bété (Gbagbo’s ethnic group) stronghold of Yopougon, Abidjan. Kouadio Konan Bertin (“KKB”), also an independent candidate, went one step further. “As soon as I am elected, the next day, I will jump in a plane to free Gbagbo,” he declared. Same promise from Pascal Affi N’Guessan, Gbagbo’s former prime minister, who is running for the ex-president’s Ivorian Popular Front (FPI) party. Freeing Gbagbo is the “only thing at stake in the elections”. Facing a divided party, Affi N’Guessan is trying to use the aura of his mentor to reunite it. “As Côte d'Ivoire’s Head of State, I will have the political, diplomatic and institutional means to ensure that president Laurent Gbagbo and Charles Blé Goudé are freed.” However, the absence of backing from Gbagbo is a harsh setback for Affi N’Guessan.

A trial is inevitable

"The results of the upcoming election in Cote d'Ivoire will have no impact whatsoever on Laurent Gbagbo's continued detention at the ICC,” says Professor Kevin Jon Heller, an expert in international criminal law at the School of Oriental and African Studies (SOAS) in London. “The Court is an independent judicial organization, so Gbagbo's prosecution will continue even if the FPI wins the election. Indeed, at this point, there is only one way Gbagbo will be released from ICC detention: if he is acquitted at the end of trial." The trial of Laurent Gbagbo and Charles Blé Goudé must follow judicial procedures outlined in the Rome Statute, founding treaty of the ICC, and the Court’s Rules of Procedure and Evidence. The defence and prosecution teams present their cases to the judges according to these rules, which take into account the interests of victims and justice, but not of the country as such - even if there is a popular movement calling for him to be freed. Gbagbo’s lawyers have submitted several unsuccessful requests for his provisional release. According to the ICC Field Outreach Coordinator in Côte d’Ivoire, only the judges can decide to authorize the provisional release of a detainee and they may not take into account political considerations. The ICC rules mentioned above provide that judges periodically assess the continued detention of the relevant person, taking into account a change of circumstances, the need to guarantee his or her appearance before the judges and the risk that the detainee could obstruct or endanger investigations. Last month, the ICC judges rejected a request for Gbagbo’s provisional release for the ninth time.

According to opposition candidates, national reconciliation is impossible if the ex-president is not released. Gbagbo’s lawyers at the ICC propose another solution, only slightly more realistic than the “spontaneous” release of Gbagbo and Blé Goudé, ex-head of a pro-Gbagbo youth militia who is also detained in The Hague. Gbagbo’s lawyer Emmanuel Altit is requesting that the trial take place either in Abidjan or in Arusha, Tanzania, seat of the International Criminal Tribunal for Rwanda. However, both the ICC Prosecutor and the current Ivorian government oppose this idea based on significant security risks and logistical challenges. Given the current political climate, the trial could inflame tensions. They argue that victims, witnesses, judges and lawyers from both sides could be too exposed. Holding trial hearings in the country concerned would be a first for the ICC. The judges have not yet issued a final decision, but given previous rulings, it is highly likely thatthey will decide to continue the trial in The Hague.

Gbagbo in his own words

In his first courtroom appearance in December 2011, Gbagbo declared that his future no longer depended on the opinion of the Ivorian people, stating with resignation, “I am not sorry that I am here. I am here and now let’s see it through.”

The ex-president views his transfer to The Hague in November 2011 as the result of having overly “rocked the boat” in the face of a “French plot” against him. According to his statements from his cell in Scheveningen, Gbagbo sees his trial as an opportunity to set the record straight. “The procedures before the ICC will allow the truth that people have tried to bury to emerge,” he wrote in a book entitled “For Truth and Justice”. “My defence team has shown how the accusations against me stem from political considerations.” 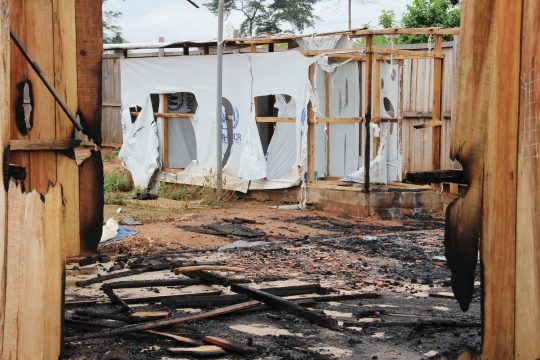