The trial of former Bosnian Serb military boss Ratko Mladic is coming to an end before the International Criminal Tribunal for the former Yugoslavia (ICTY). The Prosecutor’s closing arguments are due to start on Monday December 5, followed by those of the defence. Mladic, who has been on trial for more than four years, is charged with genocide, crimes against humanity and war crimes committed between 1992 and 1995 in Bosnia-Herzegovina.

“I chose Mladic,” former Bosnian Serb political leader Radovan Karadzic told a session of the Bosnian Serb parliament, the transcript of which is recorded by the ICTY. In 1992, Karadzic had to choose from amongst rising army officers in Belgrade the person to head the Bosnian Serb army (VRS). Twenty years later, the trial of Ratko Mladic started at the international court in The Hague, where he is charged with genocide, crimes against humanity and war crimes. Both Mladic and Karadzic, in their respective trials, have tried to put the responsibility on the other for the 44-month siege of Sarajevo and all it entailed: subjecting the civilian population to bombardment, snipers and famine, terror, murder and deportations aimed at ethnic cleansing, and the massacre of more than 7,000 men in Srebrenica. In the course of the war, despite their disagreements and differences, the two men worked together, at least according to the judges in their judgment of March 2016 sentencing Radovan Karadzic to 40 years in jail. According to the judges Karadzic, the psychiatrist from Sarajevo, was the hierarchical superior of  Mladic, the man who always claimed he was a soldier without political ambitions.

Ratko Mladic was one of the first people indicted by the ICTY, a court set up by the United Nations in May 1993, and was one of the last to be judged. Long protected by the military and by nationalists in Belgrade, the Serb general managed to evade the Tribunal for 16 years. He was finally tracked down by Serbian police on May 26, 2011 in the house of a friend in the Serbian village of Lazarevo. At the start of his trial a year later, he wanted to appear in uniform, but the judges said no. However, it is likely that his rank of general will count in his likely conviction. It was he who translated into military orders the directives adopted by Bosnian Serb political leaders Radovan Karadzic and parliamentary leader Momcilo Krajisnik, guided from Belgrade by Slobodan Milosevic. His former right-hand man Manjolo Milovanovic, testifying in his defence at the Tribunal, quoted his statements to the Bosnian Serb parliament in May 1992, during the adoption of the six directives that would bring Bosnia to its knees: “We cannot cleanse, nor can we have a sieve to sift so that only Serbs would stay, or that the Serbs would fall through and the rest leave. I do not know how [assembly speaker] Mr Krajisnik and [Bosnian Serb president] Mr Karadzic would explain this to the world. People, that would be genocide.”

Speaking from the witness box, prosecution expert Robert Donia, analysed the statement thus: “By consensus, genocide was a dirty word that Serbs were not capable of engaging in and hadn’t engaged in, and [the word] shouldn’t be deployed in discussions that were ongoing,” and Mladic used it for “shock value” with regard to “certain activities he believed were going on, or might go on through the overly ambitious programme that the leadership was advocating”.

Although he was in favour of a project to cleanse the territories considered Serb, Mladic nevertheless expressed concern about an ethnic re-composition of Bosnia. “People and peoples are not pawns, nor are they keys in one’s pocket that can be shifted from here to there,” he warned the Bosnian Serb parliament. “It is something easily said but difficult to achieve.” After four years of war and nearly 100,000 dead, the Bosnian Serbs had their own entity within an ungovernable Bosnia-Herzegovina. Mladic summed up the six strategic objectives of the Bosnian Serb political leaders in May 1992 in his war diary. “Separate ourselves from the Croats and Muslims for ever,” he wrote. “Part of Sarajevo must be ours”. We need “access to the sea”, he continued, and to “create a Serbian link to the Drina”, the river that marks the border between Serbia and Bosnia which was, until early1992, one of the six Republics of the former Yugoslavia.

Ratko Mladic’s war diary was found by police behind his wife’s wardrobe during searches at his Belgrade home in 2008 and 2010. It is one of the key pieces of prosecution evidence, which has been gathered during 15 years of investigations. In support of this evidence the Prosecutor has called to the stand 169 witnesses, including victims, experts (military, ballistics, forensics, historians, demographers), officers from the UN protection force (UNPROFOR), diplomats and journalists. As for Mladic, he has called 208 witnesses as part of a defence strategy tried many times before by other ICTY accused. When the prosecution alleges that the Bosnian Serb forces used their “ability to modulate the level of terror in Sarajevo as a bargaining chip to secure concessions from the BiH (Bosnia and Herzegovina) Government and the international community, as a means of exacting revenge for events elsewhere, and to prevent BiH from becoming a viable independent state”, Mladic asserts he acted as part of legitimate defence against alleged plans to “Islamize” Bosnia-Herzegovina. When accused in connection with the shelling of Markale market in central Sarajevo in February 1994 and August 1995, he claims the firing came from the Bosniaks, who were targeting their own population in the hope of intervention by the international community. At his request, several members of UNPROFOR came to explain to the Court their persistent doubts about these episodes.

He is also accused in connection with the kidnapping of 200 UN members who were used as human shields in spring 1995 to prevent a NATO intervention, but Mladic says they were treated as prisoners of war according to the rules of the Geneva Conventions. At the time, the Bosnian Serb leaders were preparing Opration Krivaja 95, aimed at taking back the enclaves of Srebrenica and Zepa, which had been placed under UN protection two years earlier. After Srebrenica was taken on July 11, 1995, thousands of women and children were deported by bus to other parts of  Bosnia. Their husbands and fathers were taken prisoner by Serb soldiers and eliminated one by one in farms, schools and hangars in the region. Mladic, like Karadzic before him, disputes the figure of 7,000 dead in Srebrenica and, despite the forensic evidence, claims the men died in combat. The Tribunal has managed to reconstitute in detail the steps taken to cover up the crimes. Bodies were found in various mass graves, like in the Prijedor region. In 2012, more than 700 bodies were found in the iron mines of Tomasica, Jakarina Kosa and Redak, thanks to the confessions of a former Serb soldier. Many experts and witnesses testified about the dead, mostly civilians, massacred in the Prijedor region. One of the mine directors called by Mladic, Ostoja Marjanovic, claimed he did not know the mines were used to hide hundreds of bodies. “The less I know, the better I am,” he said.

For Srebrenica, General Mladic has an alibi. His lawyers say that from July 14 to 17 he was in Belgrade. The Prosecutor does not contest this, but says he was able to give orders from Belgrade. On July 16, as his soldiers were executing their prisoners at the Branjevo farm, Ratko Mladic was at a wedding. The wedding couple came to the Tribunal to testify, telling the Court that he was not at any time communicating with the outside world. After their testimony, presiding judge Alphons Orie allowed the accused to meet his friends in the prison visiting area, and was thanked as “comrade Orie”.  Mladic promised that as soon as he was freed he would send him a bottle of brandy, the same that he used to drink on the front line. But on that July 16, the day of the Branjevo massacre, Mladic was giving orders from Belgrade, says the prosecution, which produced a video of a meeting at the Military Medical Academy in the Serbian capital. When his wife came to testify, she repeated her husband’s claims word for word. She said she remembered asking him if he was responsible for the executions in Srebrenica.  “He got serious, gave me a sharp look and asked me if I doubted his word,” she told the Court. Bojilska Mladic claims that before he was sent to The Hague, she had not had any news of her husband for ten years, that is since June 28 2001, the day that Slobodan Milosevic was arrested.

Weak and thin when he arrived in The Hague, Mladic has had two strokes and has trouble concentrating. The hearings have been shortened in consequence. One day in 2013 when the ICTY was again discussing his state of health, Mladic thanked the Tribunal doctors for pulling him “out of a grave”. “I would have visited St. Peter a long time ago,” he said. “I would have been in heaven a long time ago.” 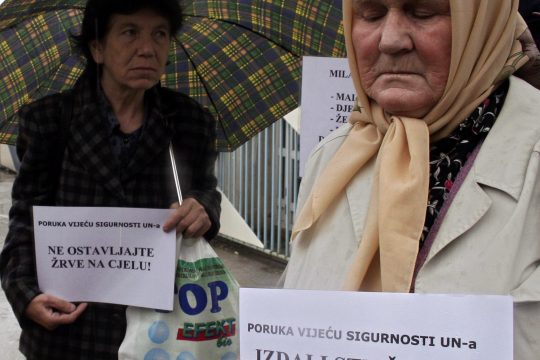 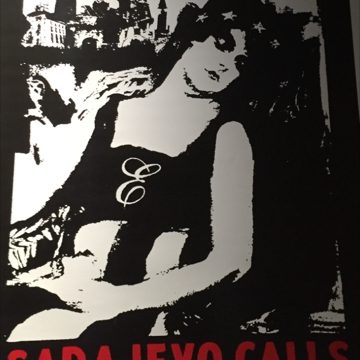 Syria, Bosnia and Chechnya: The Challenge of Documenting War 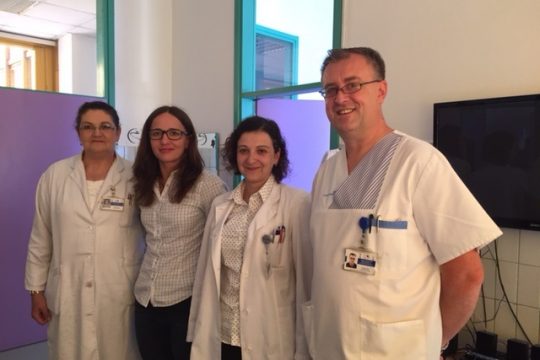 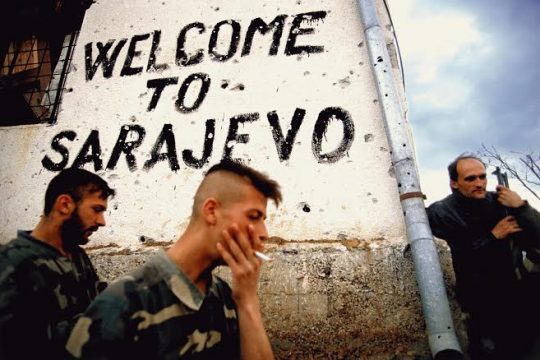