The trial has begun in the United States of Liberian national Mohammed Jabbateh (“Jungle Jabbah”), a Pennsylvania resident suspected of war crimes. The former ULIMO rebel commander is charged with two counts of fraud in immigration documents and two counts of perjury. Now that the jury has been selected, war crimes victims from Liberia are expected to start testifying before the Pennsylvania court. Alain Werner, a lawyer and co-founder of Swiss NGO Civitas Maxima, has been working for many years to help Liberian war victims get justice, and his organization is following this case closely. He spoke to JusticeInfo from Geneva:

JusticeInfo: Why has Jabbateh been charged with perjury and fraud, rather than war crimes?

Alain Werner: As I understand it, the law in the US does not allow you to pursue a non-US citizen for war crimes committed outside of the US in the early nineties, so they went for perjury. But if they want to prove he lied, they will have to prove he committed war crimes. Also, it is the first time that victims of the Liberian civil war will face Jabbateh in court. So legally this is not a war crimes case, but in effect, it is. Also, it is a criminal trial, so if Jabbateh is convicted, he will not be deported but will serve the sentence in the US.

Why is this trial important?

This trial is very important because of the staggering impunity in Liberia. The country went through two brutal civil wars, from 1989 to 1996 and from 1999 to 2003, which left hundreds of thousands of people dead and devastated the country. There was a Truth and Reconciliation Commission which called in 2009 for criminal prosecutions but nothing has been done. And although the President is a Nobel peace prize laureate (Ellen Johnson Sirleaf), she did nothing to implement the recommendations. Also, this is the first time ever that victims coming from Liberia will be able to tell a jury about what happened during the first civil war. And this happens in the context of elections in Liberia next week. Johnson Sirleaf has had two mandates and so Liberia will elect a new President on 10 October.

How many witnesses from Liberia will be testifying and what about their safety?

We expect that there will be approximately 16 witnesses for the prosecution, and they will have some degree of protection. In the context of my organization and other justice efforts for Liberia there have been threats, especially against our partner organization in Monrovia, the Global Justice and Research Project.

Can you tell us more about those other efforts to obtain justice for Liberia’s war victims?

Independently of what is happening in the US, there are also efforts in Europe. One former Liberian rebel commander (Alieu Kosiah) has been arrested in Switzerland, and it is possible there will be a war crimes trial in Switzerland next year. We also expect the trial of Agnes Reeves Taylor in the UK for torture, and Martina Johnson in Belgium. We don’t think the political climate is right for war crimes trials in Liberia now. But the first place in which they should be happening, when the climate is right, is of course in the country itself.

Do you think that could change after the Liberian elections on October 10?

Things have been happening. One candidate, Benoni Urey who was close to former president Charles Taylor, issued a press release calling for the establishment of a war crimes court if he is elected. I think that’s because he knows this is something people want to hear. It seems he is not a front-runner, but still the issue is being brought into the public debate.

I understand ex-rebel leader Prince Johnson, seen as responsible for the murder of former president Samuel Doe, is also running?

He is one of the most prominent alleged war criminals ever, and some of his crimes were documented on video, even before YouTube, of Doe being tortured. The fact that Johnson is a Liberian Senator and that he is running for president for the third time is very telling about the staggering impunity in Liberia.

TRANSITIONAL JUSTICE IN LIBERIA – IN BRIEF 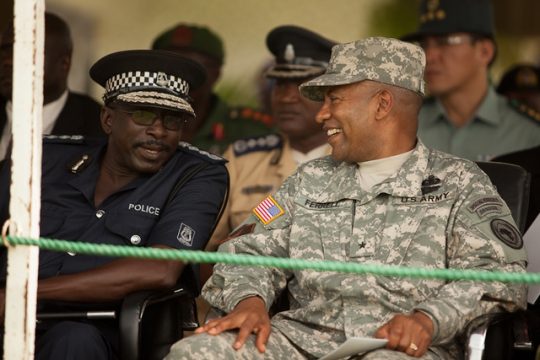