As Switzerland receives a first group of vulnerable refugees from Libyan detention centres, we take a look at the international response to Libya’s migrant crisis.

At the end of last year, CNN reports of detained Africans being sold in Libyan slave markets sent shock waves around the world. It also prompted the European Union and International Organization for Migration (IOM) to step up evacuating migrants from Libya, “because,” says IOM media officer for West and Central Africa Florence Kim, “the EU and African Union decided that we could not leave 20,000 people in detention centres in Libya.”

Also in December, Switzerland announced that it has agreed to take up to 80 vulnerable refugees as part of an emergency plan by the United Nations High Commissioner for Refugees (UNHCR) to evacuate thousands of people from detention centres in Libya. Justice Minister Simonetta Sommaruga described this as an “urgent humanitarian measure”, saying it was justified because of the catastrophic situation in Libya.

A first group of refugees arrived in Switzerland on Wednesday, according to the State Secretariat for Migration (SEM).

The group consists mainly of women classified as “vulnerable” along with women with children and unaccompanied minors. They were first evacuated to Niger before being flown to Switzerland, a SEM spokeswoman told swissinfo.ch

Some other European countries have also agreed to take refugees as part of this operation. UNHCR Special Envoy for the Mediterranean Situation Vincent Cochetel told swissinfo.ch that over 1,300 people have been evacuated so far, of whom 312 have gone to Italy, a few to Romania and the rest to Niger for resettlement processing.

In the last few years, hundreds of thousands of refugees and migrants have braved the journey across Africa to Libya, some intending to stay, but many hoping to reach Europe. “Nearly half a million have made the crossing in the last three years; over 10,000 have died in the attempt,” says an Amnesty International report published in December last year. “A further half a million, maybe more, are currently stranded in Libya.”

Of those stuck in Libya, it was estimated that at the end of last year 20,000 refugees and migrants were being held in detention centres run by the DCIM, a division of the Libyan Interior Ministry set up to tackle migration flows into Libya. Thousands more were being held in unofficial detention centres run by militias and criminal gangs, according to the Amnesty report. In both cases, it said, “people are unlawfully detained in inhuman conditions and subjected to torture and other cruel, inhuman and degrading treatment or punishment, including sexual violence.” Amnesty accused European governments of complicity in this situation.

The IOM says that since the joint operation was scaled up at the end of last year, 17,000 people have left the detention centres in Libya, of whom 11,000 have returned home on a voluntary basis. There remain only around 3,500 people in official detention centres. No doubt there are more people in places of captivity held by militias, but access is a problem, according to Florence Kim of the IOM.

What counts in the Libyan detention centres is whether you are deemed to be an economic migrant or a refugee. Screening of refugees is done by the UNHCR, while voluntary repatriation of migrants is handled by the IOM.

Asked about the criteria for classification as a refugee, UNHCR Special Envoy for the Mediterranean Situation Vincent Cochetel says that they include “victims of torture, people with medical problems, single women, unaccompanied children and people with disabilities”. “But,” he adds, “I have to say that today in Libya almost everyone is vulnerable, so vulnerability alone is not the criteria. We have to look at whether those people are refugees or migrants. Refugees should not be forced to go home, because they are going to be exposed to persecution or risk.”

Asked how the IOM can be sure its repatriation scheme is really voluntary, Kim said the organisation makes sure that people “know they have a choice, that there is no psychological pressure on them, but at the same time we also know that it’s one of the only life-saving options that they have”.

She says some 80% of people returned home were detained in Libya. The majority of those who go back are from West African countries such as Nigeria, The Gambia, Guinea and Ivory Coast. Their profile depends on the country. “If you take Ivory Coast, 70% to 80% are male aged 18-30, mostly literate,” Kim told swissinfo.ch. “And then from Nigeria you have a lot more women than from other countries of origin, and among those women maybe 80-90% are victims of trafficking.” There are also many unaccompanied minors.

An innovative aspect of the voluntary repatriation programme is reintegration support, whereby the IOM works not only with the individual but also with the community of origin. “You are a returnee. We don’t leave you alone with your reintegration project, we try to put you with other people,” says Kim. “Let’s say we are going to help you build a poultry farm, you are maybe going to be managing that with other returnees. We also try to include potential migrants.” She says this is also designed to avoid tension within the home community.

Asked about the arrival of the first group of refugees in Switzerland, the State Secretariat for Migration (SEM) would say only that they are mostly vulnerable single women who have been evacuated from Libya to Niger. The statement did not give any numbers.

A SEM spokesperson nevertheless told swissinfo.ch that the federal government has been negotiating with the cantons to place the refugees. According to Swiss practice, the refugees will stay in the care of federal authorities for only a few days, before being sent to the cantons for resettlement, according to agreed quotas.

Switzerland is expected to take more refugees currently in temporary centres in Niger, where a mission from SEM has been to conduct its own screening. And the UNHCR is still looking for more host countries for refugees. “We are asking Switzerland and also other European countries and countries outside Europe to take more because we really need to make sure that we evacuate as many people as possible from Niger,” Cochetel told swissinfo.ch.

Copy this HTML into your CMS
Press Ctrl-C to copy
Libya : Related articles 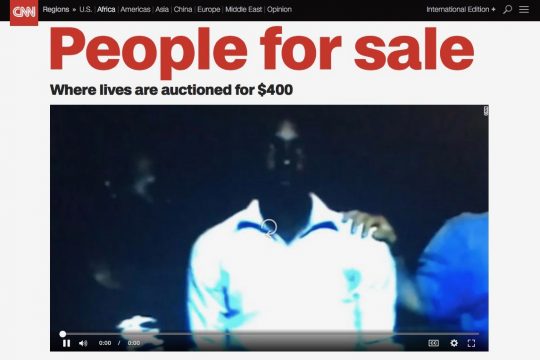 Rwanda: What should happen to priests convicted for genocide?

Julia Crawford, swissinfo.ch
All reports from this author
Julia Crawford is a journalist and translator for JusticeInfo.net since June 2015. She is an experienced journalist, editor and journalism trainer, specialized in African affairs and transitional justice. She has previously worked for Radio France International in Paris, as editor of the Hirondelle News Agency in Arusha, Tanzania, for IRIN in Nairobi, the Committee to Protect Journalists in New York and BBC Media Action in London. Julia Crawford currently also works part-time as a news and feature writer for swissinfo.ch.