On July  26, 2018, the High Military Court of the Democratic Republic of the Congo (HMC) has confirmed the condemnation of all 11 accused in the Kavumu case. The first instance judgment had seen them condemned for rape as crimes against humanity – a decision now confirmed by the country’s highest military instance.

TRIAL International welcomes the HMC’s decision, which goes to proving the solidity of the case. It is particularly satisfied with the lifelong condemnation of the provincial politician Frederic Batumike – a historical precedent in DRC. This decision shows that nobody is against the law, regardless of their social or political status.

“The highest military jurisdiction in the DRC has sent a clear and welcome message against impunity” says Daniele Perissi, head of TRIAL International’s DRC program. “It thereby invites the authorities to apply the law in the broadest way possible, reinforcing a strong and fair justice system, accessible to all.”

Karen Naimer, Director of the Program on Sexual Violence in Conflict Zones at Physicians for Human Rights, shares this conclusion: “This case demonstrates the importance of supporting national processes, which constitute the first and primary avenue for justice, including for international crimes such as those committed in Kavumu.”

Civil society united on the frontline

This trial has been made possible, among other things, by the mobilization of the Congolese and international civil society. They brought together their expertise to draw the attention of the national authorities and present a strong case in court.

TRIAL International has supported the victims of Kavumu since 2015, as a member of the Task Force for International Criminal Justice in South Kivu. In this framework, the NGO has contributed to the legal support of victims and their families, notably through the documentation of crimes and the elaboration of the judicial strategy.

In cooperation with the organization Physicians for Human Rights and the Hospital of Panzi, TRIAL International has also organized medical exams and recorded psychological interviews of the young victims.

The Congolese State is not civilly liable

Sadly, the HMC has failed to recognized in its verdict the failure of the Congolese state to protect civilians. The civil parties, assisted by TRIAL International, had invoked that measures to stop the crimes and prosecute the authors were widely insufficient. The judges have not, unfortunately, followed this argument.

Additionally, the HMC has confirmed the reparations granted to victims in the first decision. A positive point, but failing to cover all their needs such as access to medical care. Reparations are all too often left out of criminal proceedings, in DRC and elsewhere.

In spite of these shortcomings, the verdict of the Kavumu case constitutes a strong beacon of hope for all the victims of atrocities in Eastern DRC. 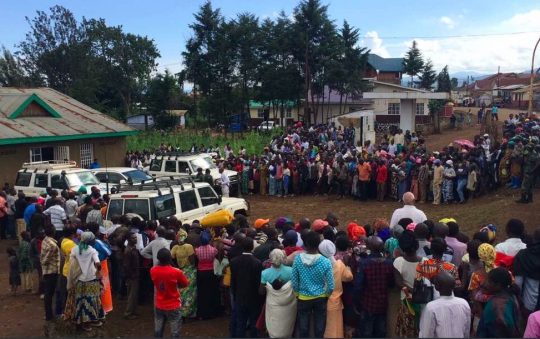 Judgment day in Kasai
Most read

Hissène Habré: the lion of Chad is dead